I’m not even going to attempt to deliver a knowledgeable post about the legendary outlaw Robin Hood. The Internet is flooded with history, folklore, poems, songs and stories about him for those who wish to seek them out. This post is about the statue; however, I will tell you that he is the local hero of my childhood in Nottingham and that his statue and I are of similar age. It’s situated in the grounds of Nottingham Castle, and here are my own children getting acquainted with him in 1988. It was presented to the city of Nottingham in 1952 when I was still a babe in arms. The statue was unveiled by the Duchess of Portland, to the accompaniment of a fanfare from the band of the Royal Lincolnshire Regiment.

The Royal Academy sculptor, James Wood, was commissioned by a local business man Philip E F Clay, in 1949 to make Robin and other statuary and plaques, to commemorate the visit by Princess Elizabeth and the Duke of Edinburgh on June 28th 1952, during the city’s quincentenary celebrations. A large party of civic guests dined on an appropriate medieval banquet, which included venison and mead, and from the Minstrel Gallery came the music of 'Merrie England', with a programme that included Greensleeves.

There were possibly audible gasps of surprise when the statue was unveiled, as the popular conception of Robin Hood at that time was of the Errol Flynn rôle. This Robin, the result of meticulous research by Woods, was the stocky yeoman type which would historians believed medieval foresters would have looked. And so the debate began, and has continued for the past sixty or so years. Every generation has their own Robin Hood; my own mother still favours the swashbuckling Flynn, whilst I was brought up on the TV serial of the 1950s, starring Richard Green. Then came Michael Praed in the TV version of the 80s and I was instantly in love.

Poor old Robin has been the target of souvenir hunters and vandals over the years, and I remember him sometimes without his bow, or part of it, or more often than not, minus the arrow. During the 50s and 60s replacement arrows were costing the City Council £55 a time. The statue itself was cast in eight pieces of half-inch thick bronze, weighing half a ton, so would be difficult to steal, but the arrows became a target (sorry) because they were so easily removed. It was a former Sheriff of Nottingham, Alderman Frank Dennet, who came to Robin’s aid by commissioning the services of the engineers at the Royal Ordnance Factory, to make the new arrow from a particularly strong material, fixed with a special welding process. Thus part of the legend was reversed, as the Sheriff was traditionally Robin’s arch-enemy.

The statue is now truly iconic, appearing in advertisements, posters and TV shows, and now here he is in my blog and reaching a new audience through Sepia Saturday, where this week’s photo prompt is statues and monuments.

Before you go over there to see what other contributors have posted, here’s a picture of another of James Woods’ statues. My son joins Robin’s Merry Men in this photograph. The statue shows Friar Tuck, Little John and Will Stukely having a rest from their outlaw duties. 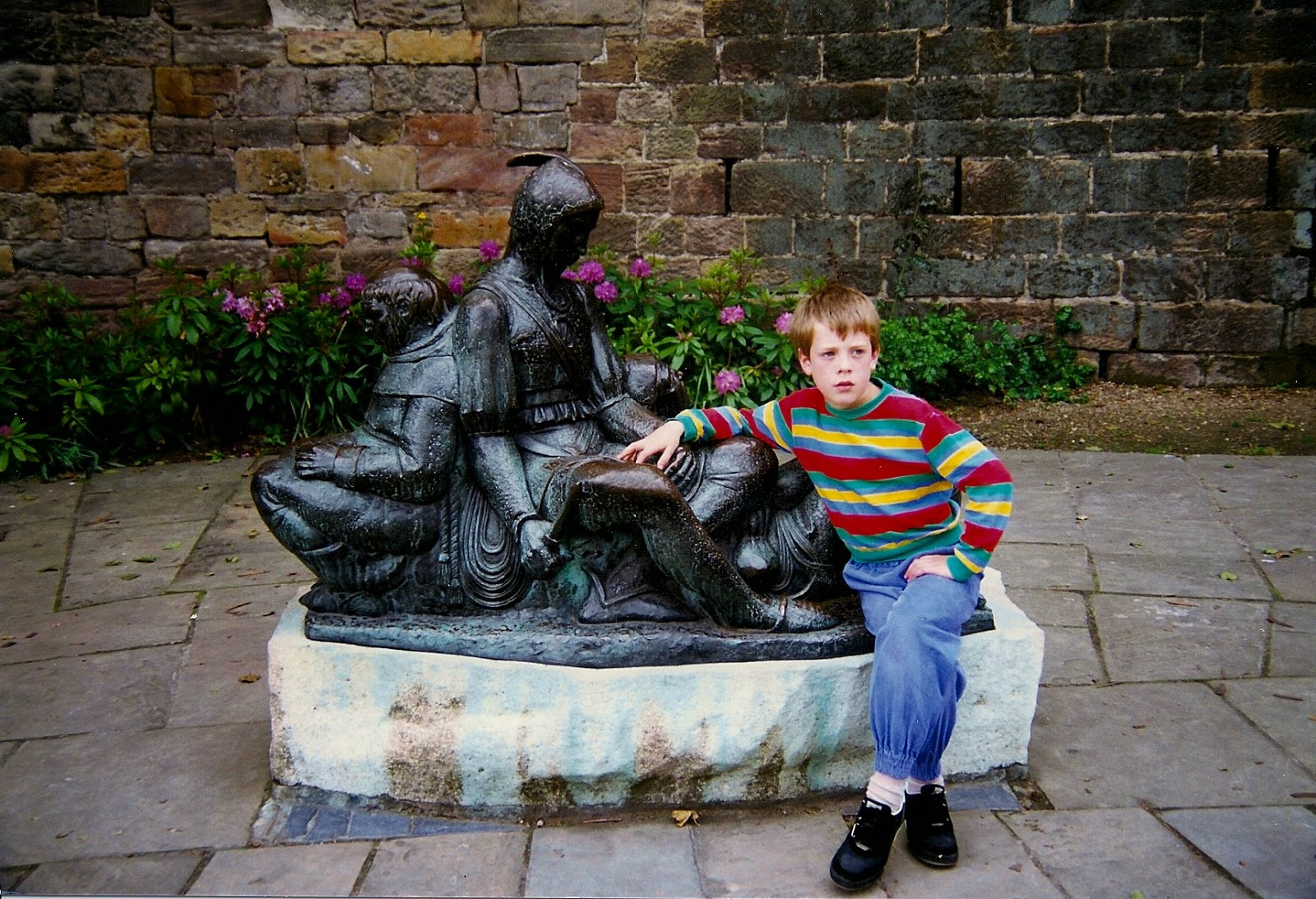 I am indebted to an informative article by the Nottingham Post, from which many of the snippets of information for this post came.
Posted by Little Nell at 04:28