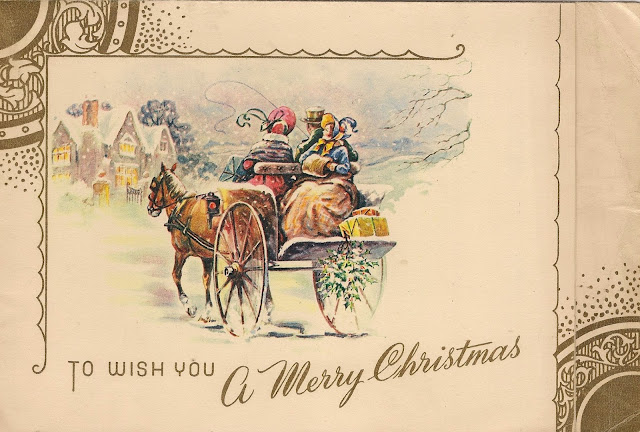 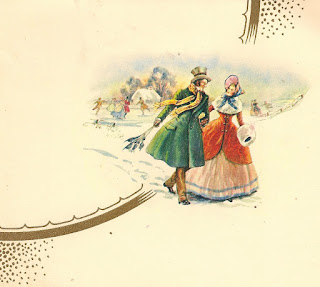 Some of the oldest family Christmas cards in my collection. The one above, depicting a jolly Victorian coach scene, was sent by my mother to my father during WW2. The couple are also shown inside the card, where they have joined others in skating on a frozen lake. Scenes like these were typical at this time and also into the fifties; I remember that similar ones would also appear on chocolate box lids.

The one below was sent by Dad to Mum and and my brother, from the same era. Dad was in the RAF, stationed at Swinderby, and I’m guessing it was hard for him to get away to buy a more appropriate card. 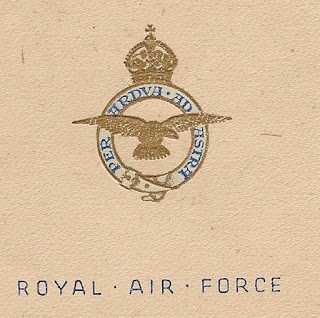 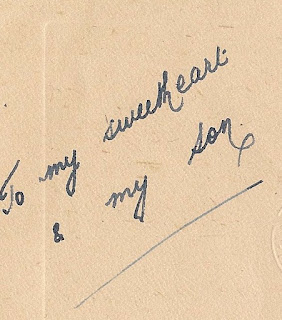 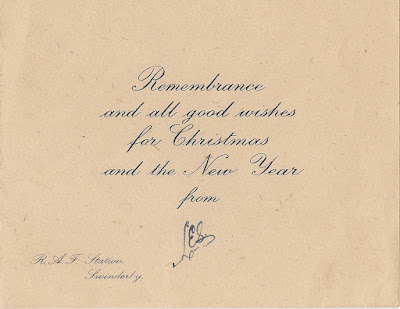 The front of the card was very simple, with a small RAF symbol in the middle of a cream background. Inside, the greeting was very straightforward, but Dad managed to personalise it in his beautiful copperplate handwriting. He still thought of Mum as his sweetheart as they’d only been married two years, but in fact she remained so for the next seventy. It was one of his many terms of endearment. 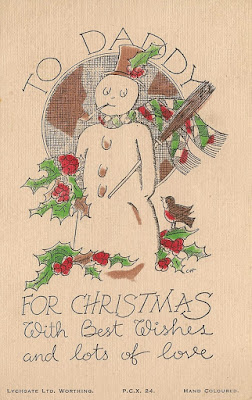 My brother sent his own card with a line-drawn snowman. The card stated that it was hand coloured, but not by my brother who was far too young. The greeting on the back is in Mum’s handwriting, but my brother has been instructed to add some kisses to Daddy and there are a handful of spidery pencilled crosses.

When he was older I’m sure my brother would have made his own Christmas cards, just as my own children did in the 1980s. Most parents, and grandparents, will tell you that these are the real treasures; the cards are often made at school and frequently covered in shiny paper and glitter.

For years, both my children made their own cards; many were inventive and creative, but here are a couple of their early attempts.

My son’s Three Kings, one of whom appears to be happily distracted, and the message inside my daughter’s card, in which she has thoughtfully shown herself and her brother. 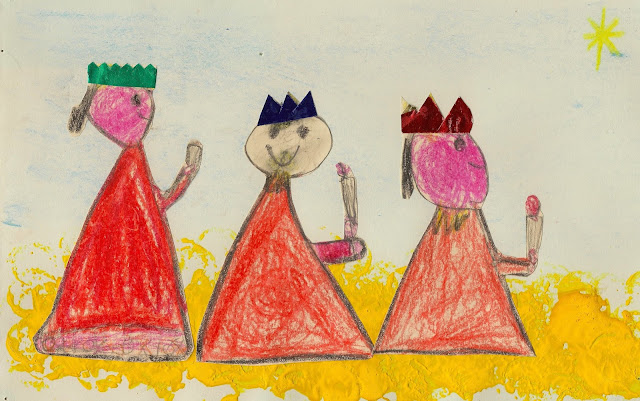 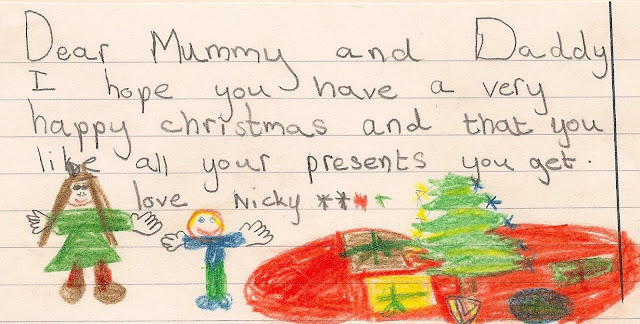 This is my contribution to the Christmas and New Year edition of Sepia Saturday, where our prompt image, below, is from the Flickr Commons collection of the Cloyne District Historical Society, the Muriel and John Van Ness album. 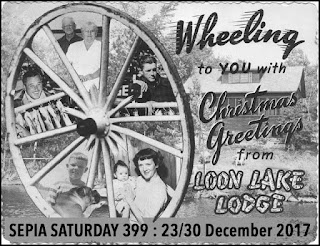 It only remain for me to say to all my readers a very Merry Christmas and a Happy New Year. see you all in 2018. 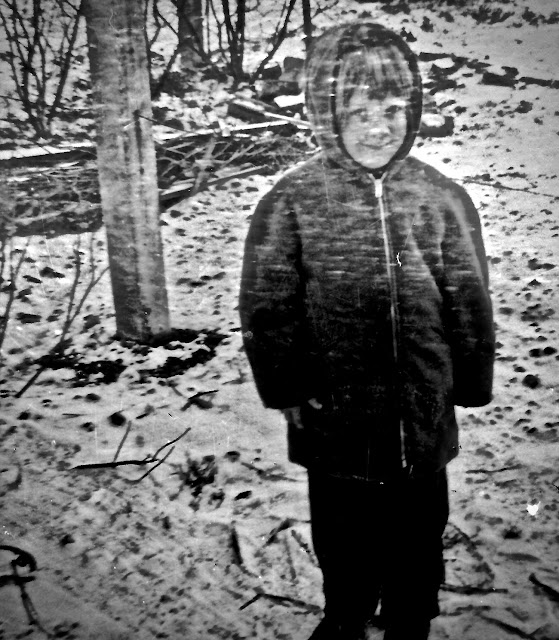 This little snowbaby is me aged about three years in the mid 1950s. It has only recently come to light, when a loose negative fell from an old album. The print was nowhere to be found, so this is a scan of that negative. It’s the only photo of me in the snow as film was precious and usually only used on high days and holidays. I don’t even know where it was taken. 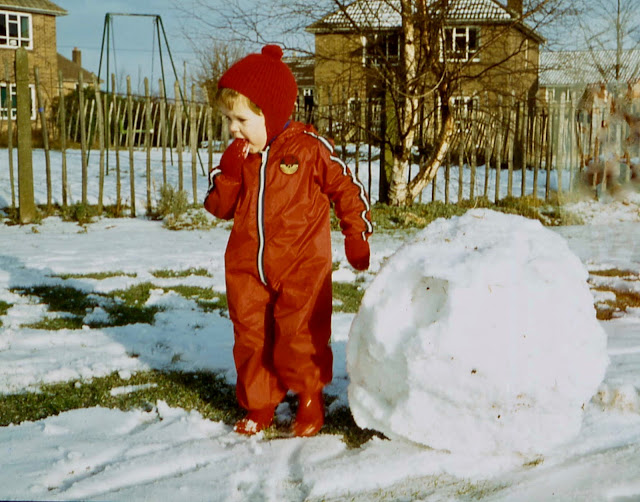 This snowbaby is my daughter aged two, in the back garden of our married quarters at RAF Wittering in 1979. Her baby brother was only a few months old at the time and was probably tucked up warm and snug in his cot. 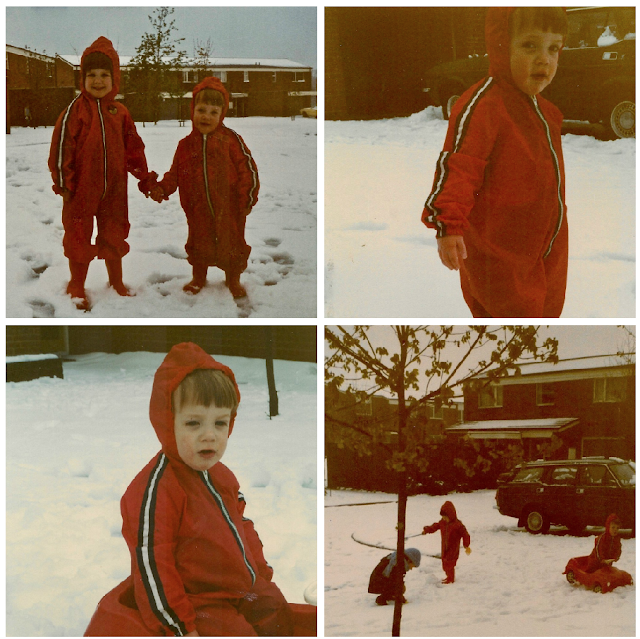 A couple of years later he was joining his sister in the front garden of our married quarters at RAF High Wycombe. Incredibly, only a few weeks before at Easter, it had been hot enough for them to play in the paddling pool. 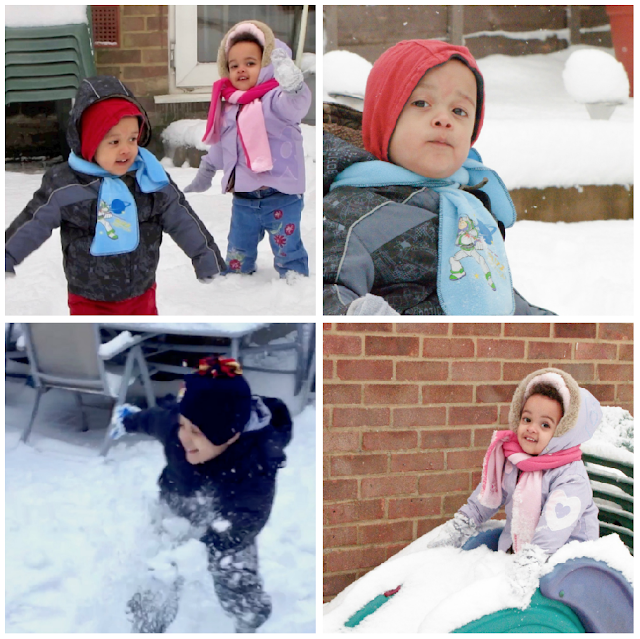 Here are his twin snowbabies in their own back garden in Kent. The slide is covered in several inches of snow but that didn't stop my granddaughter. 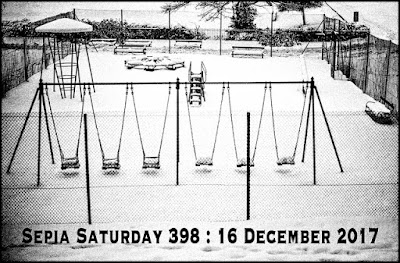 Join us today at Sepia Saturday to see how other contributors responded to the prompt image of an empty Crookes Valley Park, Sheffield* around forty years ago. No hardy souls are braving the slide and swings here; they were probably all out sledging and building snowmen.

Small boy, big fish - my husband, aged seven, looking very pleased with his catch. His family would spend part of the long Summer break from school, in Anglesey, North Wales. They usually stayed in a cottage very near the beach. His father would join them for the part of the holiday, when work allowed, but for most of the time he, his mother and siblings enjoyed catching up with friends. The same families would visit the area every year, and while the mums chatted, knitted and drank tea from a Thermos flask, the younger ones would go off and explore. 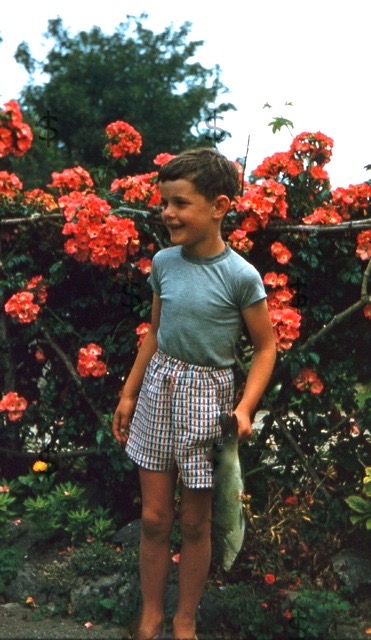 One of the families owned a boat and would take the my husband and his father out fishing. He would sit at the back of the boat ‘spinning’ for mackerel and one day caught the bream, shown in the picture. Like the small boy in the prompt photo, he doesn’t look too sure how to hold it. These days he would hold it at arm’s length, or preferably not at all. He doesn’t eat fish, or any sort of seafood, and if we find ourselves near a fish stall on our travels, we have to hurry past quickly. This is rather a shame as we live on an island, and not far from our home is a village renowned for its seafood restaurants.

I wonder if the subject of the prompt picture actually liked to eat fish. We’ll never know. I must admit when I was 'trawling’ through Flickr Commons for the next batch of Sepia Saturday prompts, this one  had to go into the net. Both little boys are very endearing and I still consider my husband quite a catch.

Join us this week to see what stories and pictures others have shared, inspired by the tiny fisherman below. 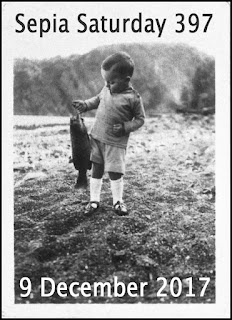