Tattered Memories and Other Aspects of Love

My mother kept this souvenir programme for a 1943 variety bill at the Prince of Wales Theatre in London’s West End. Unfortunately it has deteriorated over the years and is now rather delicate. The show was notable for comedian Sid Field’s London debut. The ‘rising generation’ included many names who went on to be quite famous, but I suspect my mother’s real fondness was for two teenagers; Eric Morecambe and Ernie Wise, as Mum had underlined their names in the programme, even though they were in two different sketches. Mum would often mention that she had seen them in this show when they were young and just starting on the showbiz ladder. The Jerry Allen Trio played the intermission music, and I remember them for their performances on television’s ‘Lunch Box’ in the late 1950s early 1960s, when I stayed at my grandparents’ house. 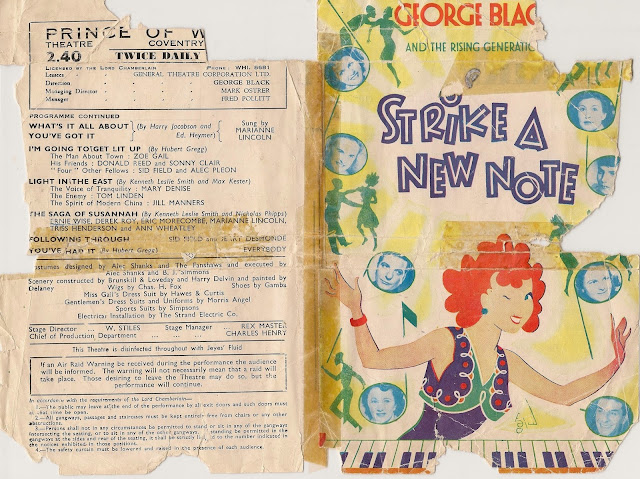 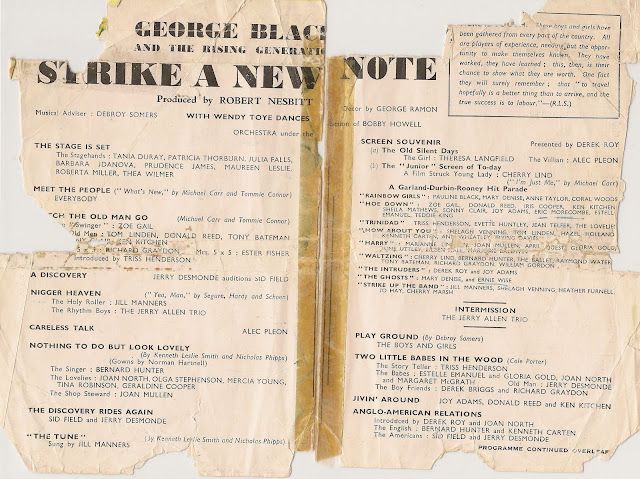 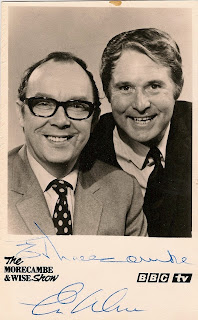 You can see a more complete programme scan here and here, but it’s still difficult to read the detail.

The show was put on in 1943; my parents had married the previous July but were both serving in the armed forces, at opposite ends of the country, and only saw each other for brief 48 hour passes if they were lucky. I’m not sure if this period co-incides with Mum’s stint as a clerk at the War Office, but they also saw Gone With the Wind at the Ritz at this time and it could be that Dad had travelled down to spend a few hours with his wife. It was their first year of marriage and they would have wanted to spend as much precious time together as possible. Keeping the programmes and tickets for these two ‘dates’ would have been important reminders for them.

The postcard on the left is my own (original) autograph of Morecambe and Wise from some time in the 1960s. 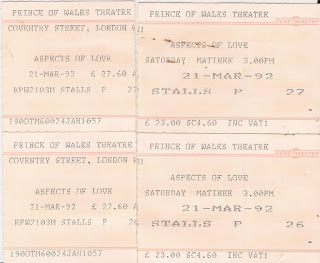 Almost fifty years after my parents’ theatre date, my own husband took me on a trip to the same Prince of Wales Theatre. This was to see the musical, 'Aspects of Love’ starring Michael Praed, who I remember at the time I had a bit of a weakness for.

I notice the dates of the tickets are almost exactly twenty-five years ago, and so would have been a birthday treat for me from my own Love. On pages 33 and 34, there is a short history of the Prince of Wales Theatre from its beginnings in January 1884, and I was delighted to see that ‘Strike a New Note’ gets a mention. 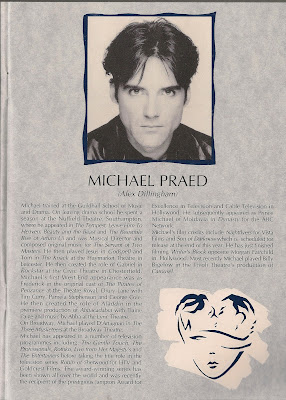 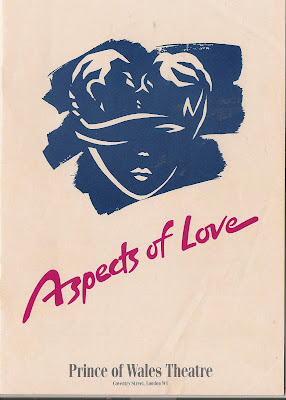 Dad died almost four years ago and Mum’s Alzheimer’s and dementia mean that her own memories, like the old theatre programme,  are a bit tattered. They are still there though in part, and I expect there are some shreds of that special Leave spent in London, when she and Dad had their theatre dates. You can click on the images to enlarge (and read) the notes, and I have copied the entire programme, including adverts, to my Flickr album.

For more memories, tattered or otherwise, book your seats at this week’s Sepia Saturday, where the great showman Louis Armstrong, seated at his theatre dressing table, was our picture prompt. 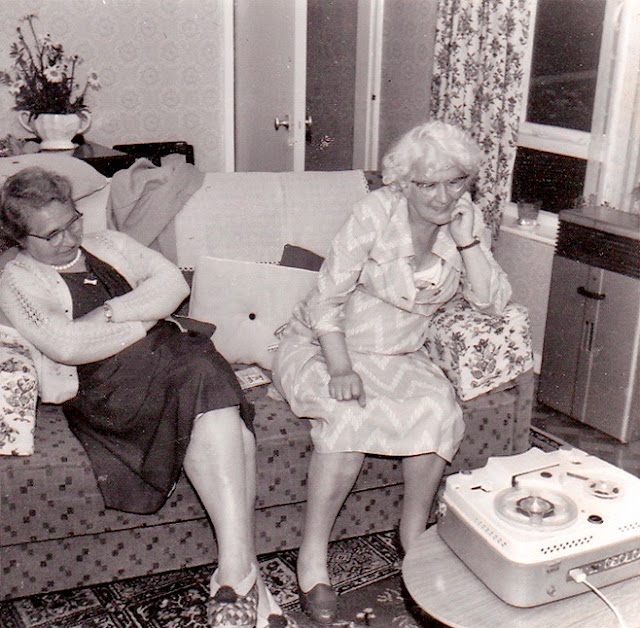 I had difficulty dating this photo of my Great Aunt Maud (on the right) and her friend Mary Carter. The reel to reel tape recorder belonged to my parents and, among other things, we used it to send Christmas messages to Maud’s brother Albert in Australia, and he would reciprocate. At first glance I assumed that was what they were listening to, and indeed that could be the case. However, I was recently listening to some archive sound recordings made by family on that very machine and had a different thought.

One of the tapes was my parents talking to Maud and Mary about the advent of decimalisation in Britain, set for February 1971. The government started to introduce some of the new coins as early as 1969, so this photo could be somewhere around 1969/70 as the conversation hinged on how the older generation (Maud was born 1897) would manage when the process was complete. Despite their concerns they seemed to have a pretty reasonable grasp, and my father was reassuring them and trying to explain an easy way of working out the value of the coins. Mary said she thought they’d be all right as, on a trip to Holland, they had managed the exchange rate of guilders, but both of them thought it would be the small coins that would confuse them.

From there the went on to talk about their own confidence in working out their shopping bills (in the old money), and how they usually had the total in their head before the shop assistant (who would be using pencil and paper). This was before automatic cash registers or tills were the norm. People of that generation would have been drilled in Arithmetic, as it was called.

I love the picture for all the details of their Living Room: the many patterns of wallpaper and soft furnishing, and the ‘antimacassars’ on the sofa; the Valor paraffin heater under the window; the flower arrangement on the sideboard; Mary’s slippers with pom-poms and Maud’s unbuttoned dress (!).

Both ladies are long gone as is my father, but it’s a delight to look at this picture, and listen to their voices from nearly half a century ago. My parents sound so young, (they would have been in their late forties) and althought they aren’t in this photo, I can imagine them, as they looked then, sitting in the chairs opposite as the ladies listened to the recording of their own voices. 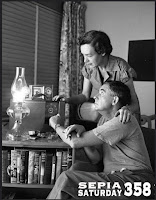 Our Sepia Saturday picture prompt this week is a couple listening to the weather forecast on the radio. Why not tune in and see what other contributors have come up with from their own albums