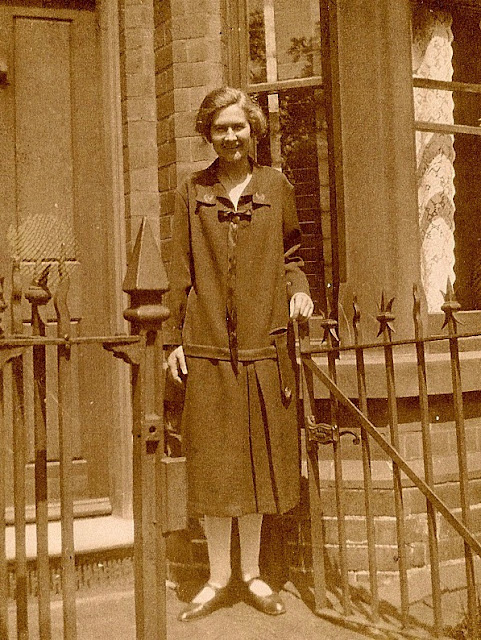 Here is my Great Aunt Maude c1925 inviting us through the gateway of a house, where she was probably lodging. I have the original, which is very small and printed on quite thin photographic paper. It was most likely taken by a friend, using Maude’s own camera. She would also have developed it herself, as she was a keen amateur.

Maude was born in 1893 and is probably in her early to mid-thirties here. She was unmarried, and working, so could afford to dress in the fashions of the time. By now women were cutting their hair short and wearing clothes which hid their feminine curves. The garçon look was very typical at this time; in stark contrast to the long hair and S shaped silhouette before the war. Waists were dropped and hemlines rose to just below the knee. Flat chests and narrow hips completed the shape. Maude is also wearing bar strap shoes which were popular throughout much of the 1920s.

I remembered this photograph when Alan posted the one below a few weeks ago on his own blog, News from Nowhere, so when he chose it as this week’s Sepia Saturday prompt, I plucked my own snap of Maude, quite literally, from the shoebox. 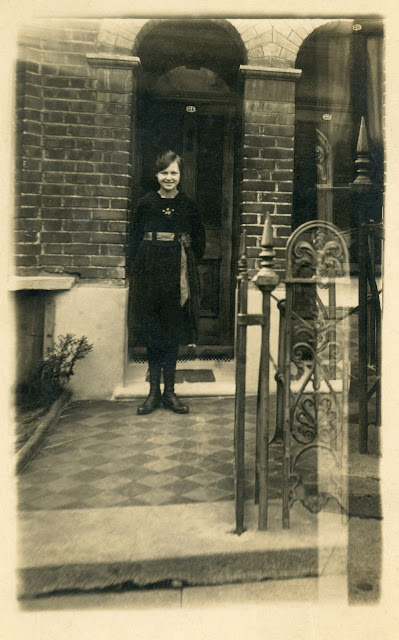 They make a nice pairing. Alan’s is the girl at No 24, but as Maude is standing slightly to one side I have no idea of the door number. Both images have similarly spiked fencing and brickwork, although no 24 appears to have a rather nice tiled front path and a shallow step. Both images are damaged slightly as no 24 has a a ghost image of the fence and gateway to the right, overlaying no 22, and Maude’s has a thumbprint, in all likelihood her own, on the left.

The girl at no 24 is also much younger than Maude and the photo itself could belong in a slightly earlier time, before 1920, (when bar strap shoes first appeared) and when higher waists and sashes were popular.

Both ladies have charming smiles and seem to be equally proud of their houses and their fashion sense.

Just fifty or so years after Alan’s picture, I too became the girl at no 24, when I moved with my parents and brother to what would be the family home for many years to come. Sadly all our photos of that house are of the interior and garden, and even the street outside, but not the front door, and certainly none of me posing in front of the door. Great Aunt Maude once again, has come to the rescue.
Posted by Little Nell at 23:22 13 comments: 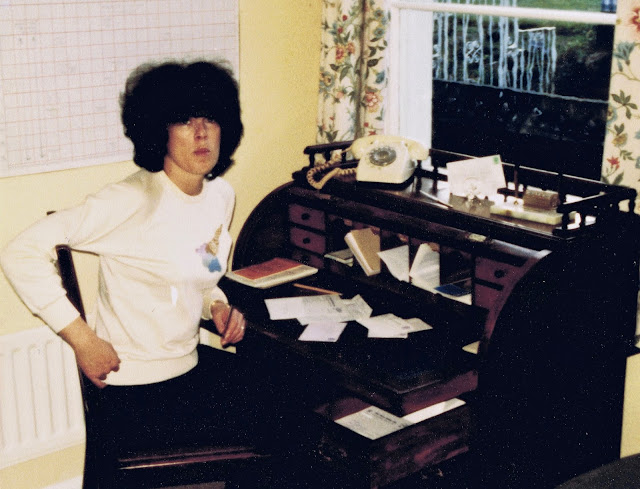 This is my late sister-in-law Gill, looking a little unhappy at being asked to pose at her desk. She was probably in the middle of doing accounts and checking bookings and other paperwork for the holiday apartments she and her husband ran in Devon in the 1980s. It’s taken about 1983 but the desk is a lot older of course. 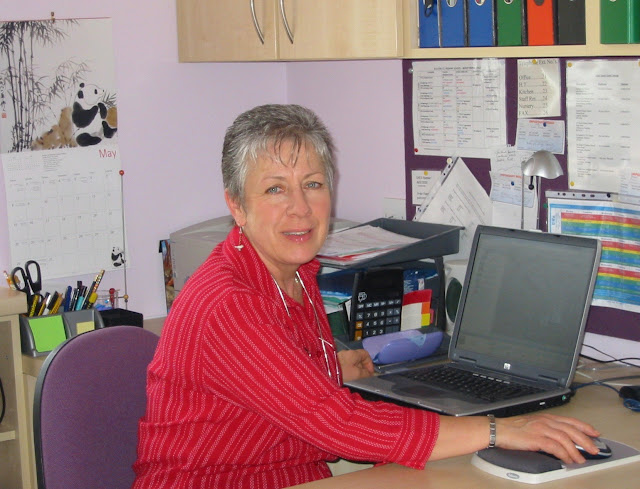 And this is me, looking all efficient and headteacherly in my newly refurbished office, during my last headship. The photo was probably for the newly created school website. By then I was no longer teaching and the job had become a mixture of many admin roles; dealing with the school budget, liaising with the education authority, Social Services and the Diocese (as it was a Church school), overseeing building works, staff appointments, showing parents round etc, etc. On good days I actually spent time with pupils. When the office was getting too much to bear, I went on my rounds of the classrooms and enjoyed the company of the children. I didn't sit at my desk for too long at a stretch if I could help it; I had an open-door policy most of the time, which meant someone was usually popping in. There would also be meetings and courses to attend, often off-site. 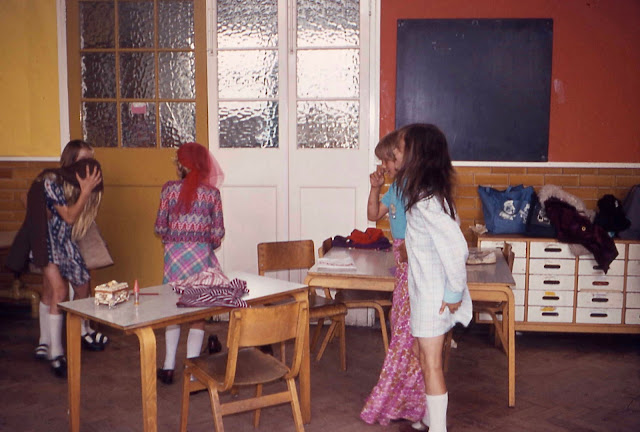 By contrast, here are some good old fashioned school desks - well 1974 vintage - made of wood! This is m first ever class at a school in Lincoln. The children were rehearsing for a play, though I don’t remember which. Strange to think, that at twenty-two, I was only about twelve or so years older than them. Many of them will now be parents and grandparents themselves! 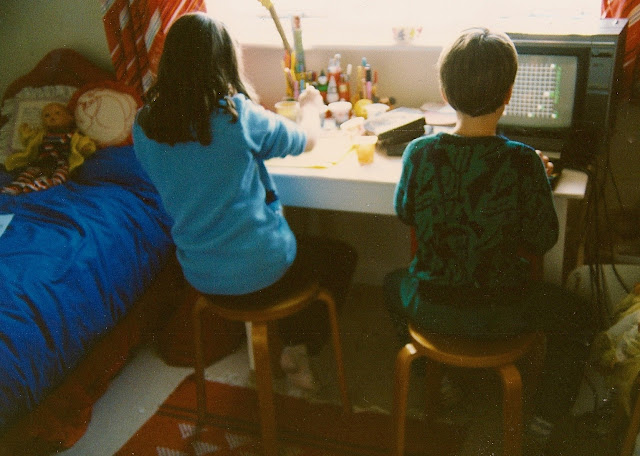 Here are my own two playing companionably together at the desk in my daughter’s room c1983. Both computer literate and with artistic skills, these days, back then my son was computer mad and my daughter was the one writing journals and painting. My son now uses his IT skills in his work and my daughter has a sideline to her regular job, where she designs and makes bespoke earrings, dreamcatchers etc. This photo sums them up quite well.

This is the Sepia Saturday prompt image which inspired the above post. Why not see what other contributors made of it?