I could post a whole gallery of pictures from Christmas meals over the years. It’s one of the occasions when families and friends gather together around the table and somebody has the camera! However, I’m going to choose just one Christmas Eve in 1963 as my offering for Sepia Saturday over the Christmas and New Year. 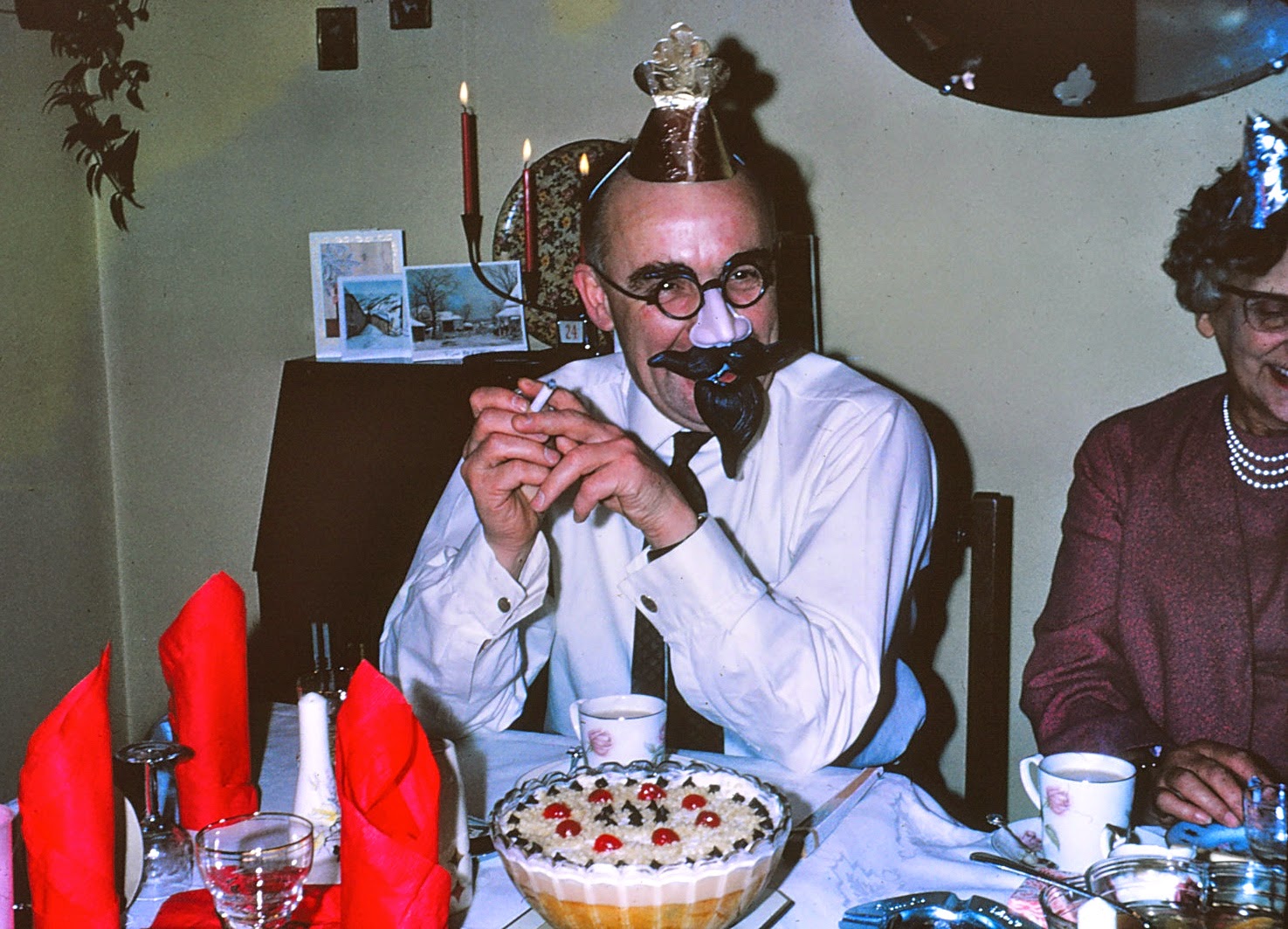 This is my Dad in festive mood and looking fetching in his party hat and facial add-ons. The calendar behind his right shoulder is the clue as to the exact date and proves that the 35mm slide was scanned the right way round. This is towards the end of the meal as it’s coffee and dessert time. Dad still smoked in those days and I just hope that the ash didn’t end up in that sherry trifle! I think the ‘disguise’ was probably his little table gift. This was the house of my parents’ friends to which we were often invited on Christmas Eve. Judging by the napkins which have not been unfurled, somebody people didn’t make it on time. I know this because ‘that person with the camera’ took a picture of the splendidly set out table before we all descended upon it. 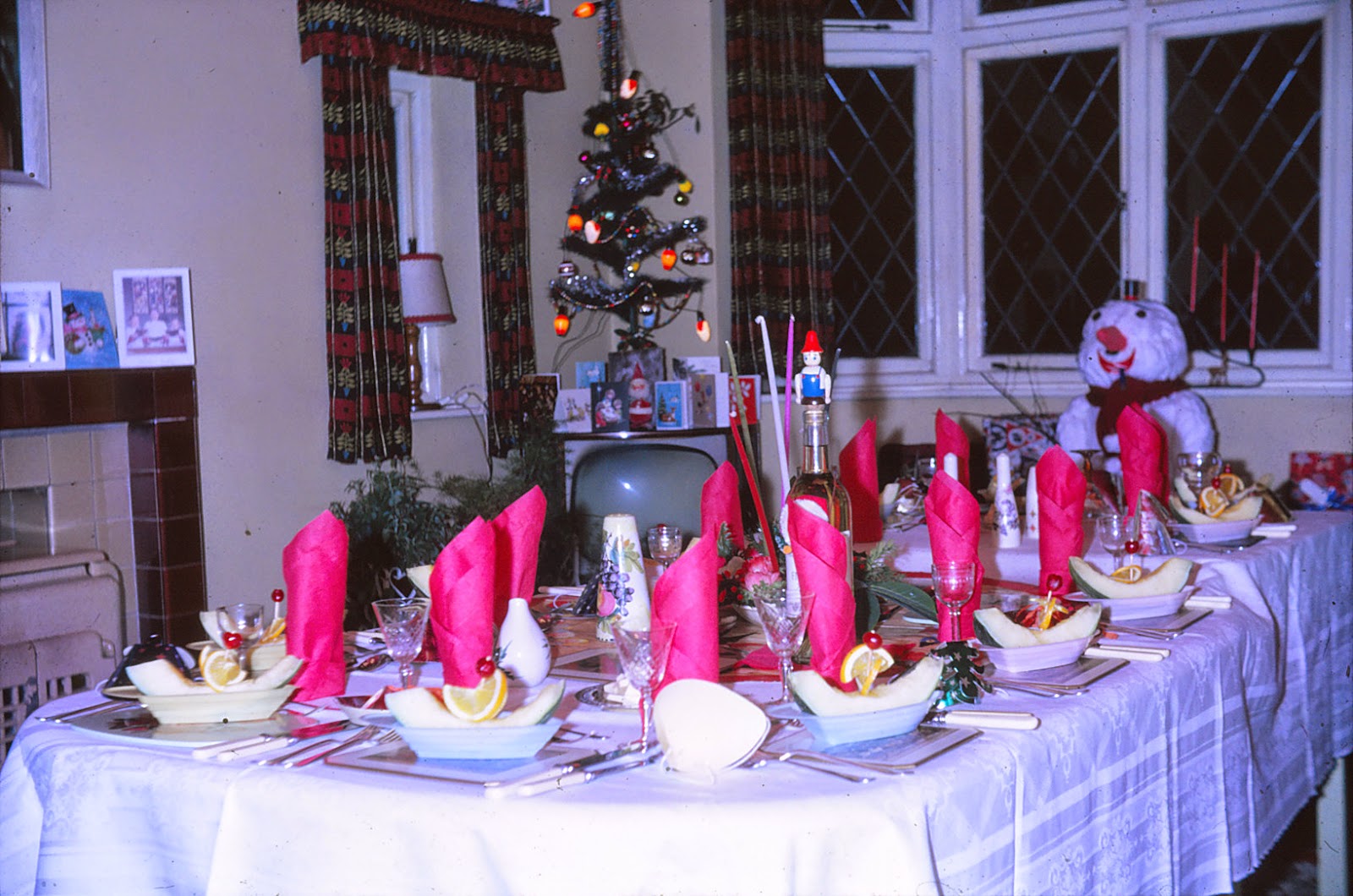 There were eleven places laid (I don’t think Mr Snowman was a guest, although it looks that way). I see we had melon ‘boats’ for starters, and the first pictures shows that we had trifle and fruit salad for dessert, but I have no memory of what came in between. It was probably a cold meat salad of some sort. I was trying to work out what was in the bottle with the quaint wooden bottle-stopper and why it was already opened before the guests were seated. If it contained wine I don’t think it would satisfy ten adults, but I came to the conclusion that it was probably sherry. 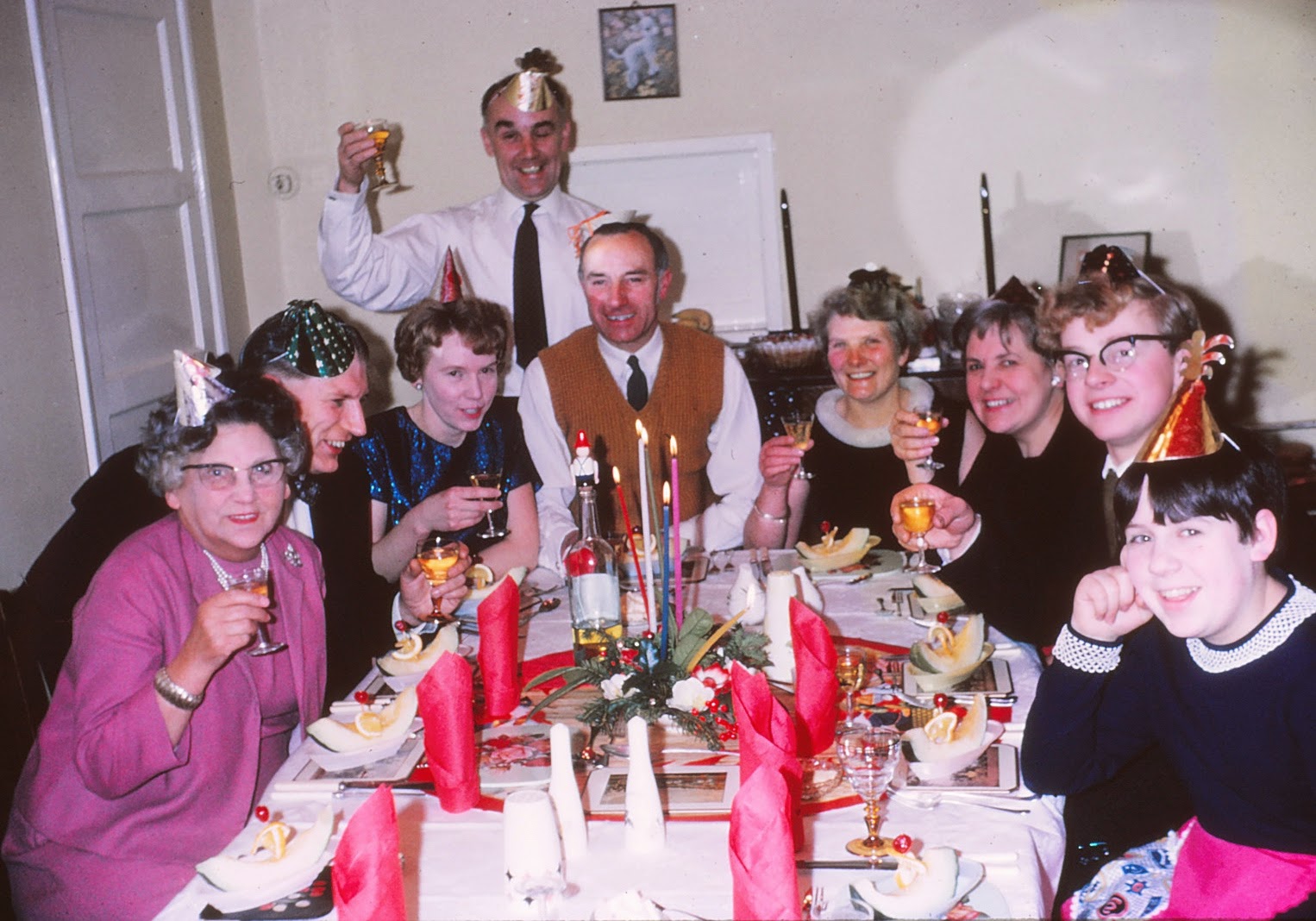 The guests have now been ushered into the dining room and ‘that person with the camera’  has instructed us all to wear our party hats  and raise our glasses, except I can’t as I am a minor so mine is empty. Yes, that’s me bottom right aged eleven and feeling very grown-up with the sherry-quaffers no doubt. I’m sure some orange squash would have been handed to me afterwards. There’s Dad again, standing behind our host and winking at the camera. The lady with the fluffy white collar is our hostess and My Mum is seated on her left. The young man between me and Mum is a family friend. The mystery of at least one of the unused napkins is now solved as I am wearing my party-pinny instead! But who is wielding the camera? Judging by the first photograph, Dad would have resumed his place next to the lady in pink. Ten of us are present at the beginning of the meal, there is an unassigned napkin in the foreground, next to me and even more mysterious three unused by the time we reached the coffee course. 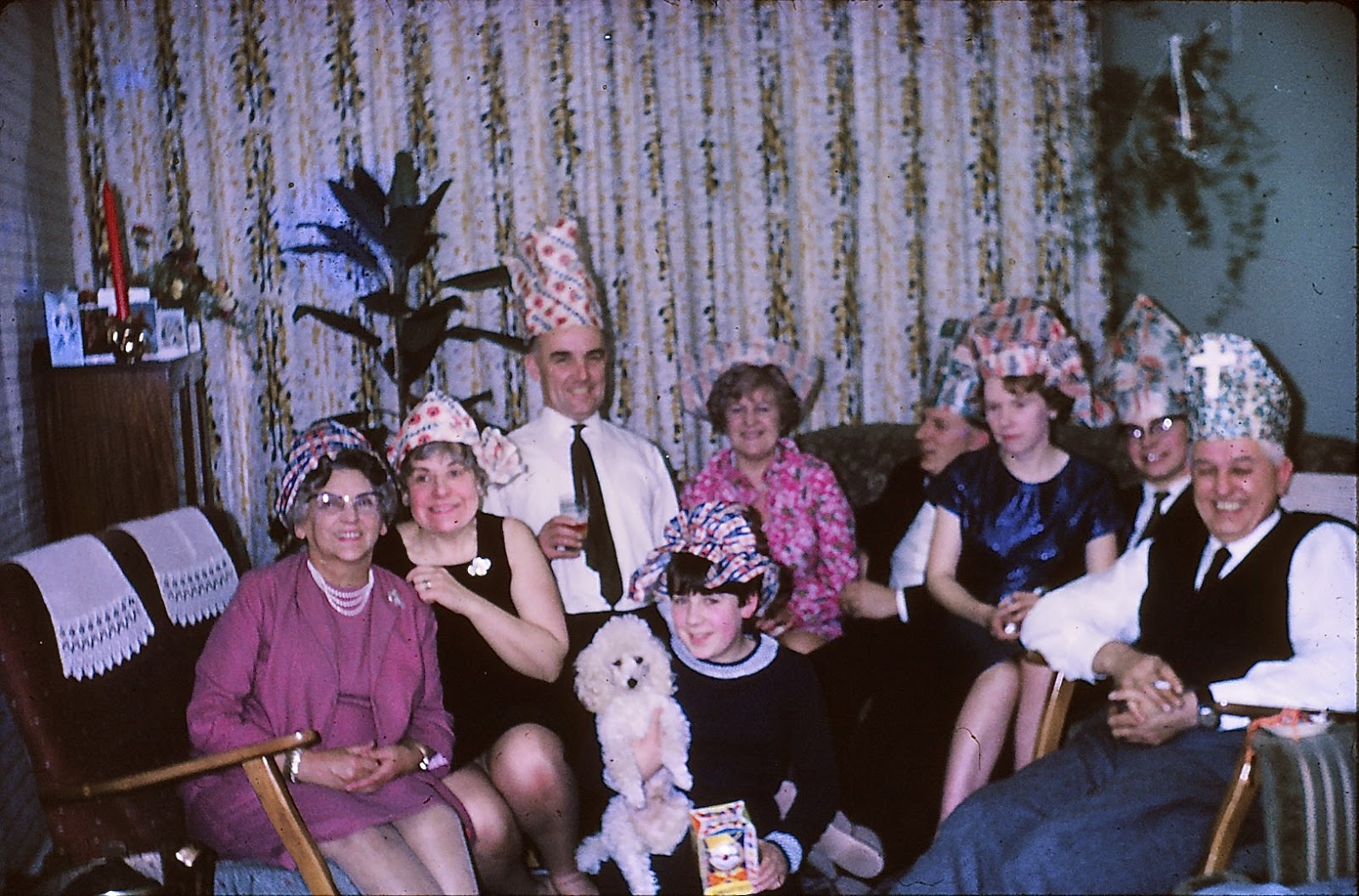 No more pictures at the table and after the meal we’ve moved to what our hostess called ‘the lounge’. Two more guest have joined us, and we are now wearing a new set of headgear. These hats are more substantial than the first set and appear to fashioned from gift wrap. I wonder if it was a party game, if so it appears that I won first prize; no not the dog, he was mine already. It looks like an Easter Egg but I think it was a similar confection brought out at Christmas. The latecomers seem relaxed and this time it was probably the host pointing the camera whilst the hostess washed up and cleared the kitchen (that’s the way it was in those days). So now we have accounted for eleven people, but we haven’t solved the mystery of the phantom photographer - or have we? 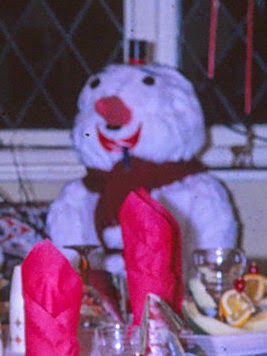 No wonder he looks so pleased with himself! We will never know the answer as sadly, only four of us are left and two are elderly. I prefer to remember the happy times we had more than half a century ago. Walking the short distance back to our own house, the pavements were always glistening with frost in the streetlights. As soon as we got home we would rush to get ready for bed, as the house was unheated, and snuggle down with our (new-fangled) electric blankets to wait for Christmas Morning.

Join other Sepians sometime between now and 4th January, to see who gathered round their Christmas Tables. Merry Christmas and a Very Happy New Year to you all.
Posted by Little Nell at 00:31