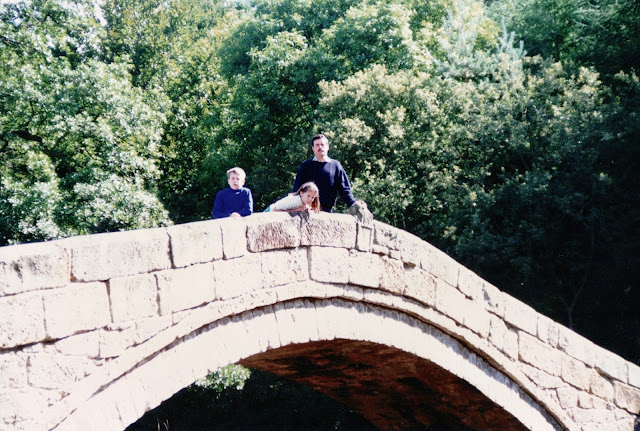 This is my family in 1988, on our holiday at Egton Bridge in North Yorkshire. We weren’t playing ‘Pooh Sticks’ just posing on a famous packhorse bridge called ‘Beggar’s Bridge’ over the River Esk at Glaisdale, not far from our holiday cottage. 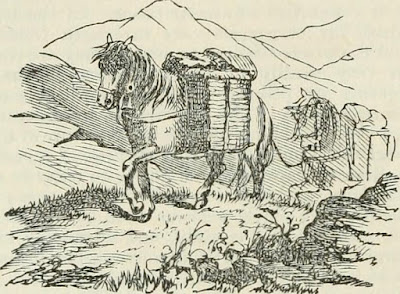 I was looking for a suitable illustration of a packhorse from around the time that the bridge was built in 1619 by Thomas Ferris, but instead I found this one from,

'Chambers’s  encyclopaedia; a dictionary of universal knowledge for the people’ published in 1871*

which also gives the following definition:

PACKHORSE, a horse employed in the carriage of goods, which are either fastened on its back in bundles, or, if weighty, are placed in panniers, slung one on each side across the horse’s back. The saddle to which the bundles were fastened consisted of two pieces of wood, curved so as to fit the horse’s back, and joined together at the ends by other two straight pieces. This frame was well padded underneath, to prevent injury to the horses back, and was firmly fastened by a girth. To each side of the saddle, a strong hook was attached, for the purpose of carrying packages, panniers, &c. Panniers were sometimes simply slung across the horses back with a pad under the band.

The panniers were wicker baskets, and of various shapes, according to the nature of their usual contents, being sometimes long and narrow, but most generally having a length of three feet or upwards, a depth of about two-thirds of the length, and a width of from one to two feet. The packhorse with panniers was at one time in general use for carrying merchandise, and for those agricultural operations for which the horse and cart are now employed; and in the mountainous regions of Spain and Austria, and in other parts of the world, it still forms the sole medium for transport; though the mule has, especially in Europe, been substituted for the horse. 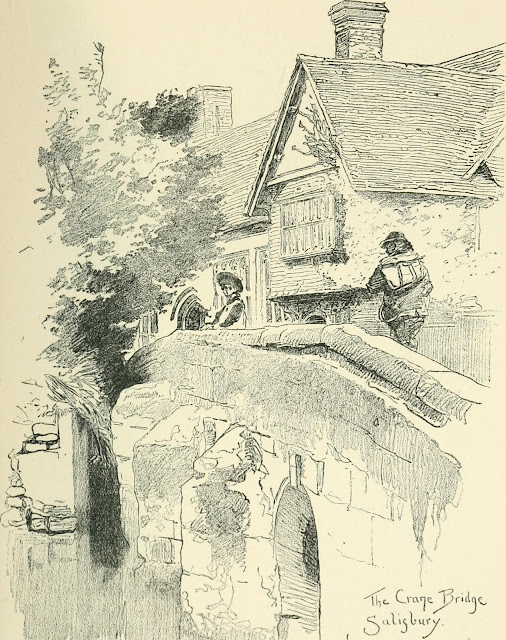 I found the above image of Salisbury, in a book called ‘Vanishing England’ (1911)* which the book describes as:
‘A small Gothic bridge near the Church House, and seen in conjunction with that venerable building it forms a very beautiful object.’ I know that bridge, over the River Avon, very well from the many years I lived in Salisbury, and of course it looks very different today and has listed status. It made me wonder if it had once been a packhorse bridge. Apparently its first archival mention is in 1300, but the name Crane Bridge was not used until the 16th century.*** The bridge has seen various changes, additions and widenings over the years. The artist appears to have presented a somewhat foreshortened view of the bridge as, according to ‘A History of the County of Wiltshire: Vol 6’ written in 1962,***

"The present bridge is part of one of six stone arches standing in Leland’s time, is a 15th century structure with four splayed arches, having traces of a smaller and lower archway at its Eastern end. The south side of the bridge was taken down in 1898 and re-erected to widen the road.”

Salisbury became an important centre of the wool trade among others, as well as holding regular markets and fairs, and so it’s reasonable to assume that a packhorse bridge would not serve at a time of growing commerce in an important cathedral city.

“.......old Bridges are fast disappearing and are being substituted by the hideous erections of iron and steel. It is well that we should attempt to record those that are left, photograph them and paint them, ere the march of modern progress, evinced by the traction-engine and the motor-car, has quite removed and destroyed them.”

Fortunately, the hundred years since the book was written, have seen the massive advances made in technology and we now live in a digital age where seemingly everything is catalogued. Nevertheless I’ve done my bit here. I hope you’ll enjoy it, along with other contributions to this week’s Sepia Saturday. 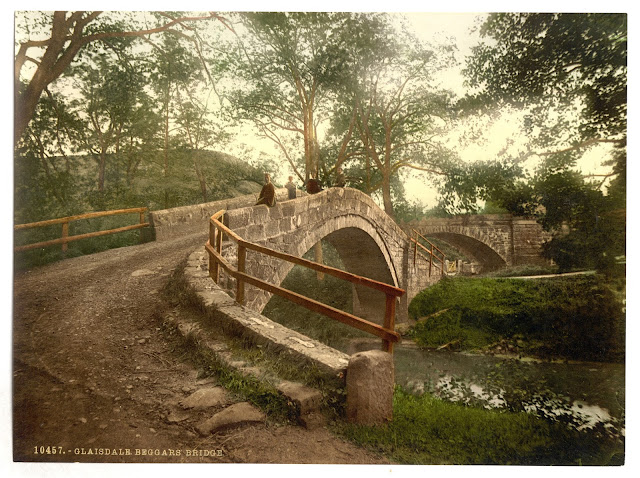 Here in Playa Blanca, Lanzarote, we are in the middle of a week-long fiesta* to celebrate the Patron Saint Carmen. The actual Saint Day is 16th July and from that date on towns and villages on the island hold their own celebrations. Here, and in Puerto del Carmen, there are churches dedicated to Nuestra Señora del Carmen, reminding us that fishing was once the main source of income. At the beginning of the week, the effigy of the saint is paraded through the town. All week we have the fair and lots of activities for young and old, and at the weekend we have live music and fireworks.

On Sunday, the saint is paraded once more, to a highly decorated boat, where she is placed in full view of the surrounding flotilla, whilst the locals and tourists watch from the prom. The old tradition is that she blesses all the small fishing vessels and the fishermen pray for bountiful catches during the coming year; these days anybody can join in. A few years ago, our friends invited us aboard their boat to join the flotilla. I’m not good on boats, but we actually had a good time.

I remember it was all fairly chaotic towards the end, when the circle broke down and it became a bit of a free for all! Sailing back towards the sunset however, gave us a view of Playa Blanca we don’t often see. At this time of year, I remember that day with fondness, and I have good memories of my friend, who sadly died the following year. She was calling out to her husband to move away from some of the boats who were ‘bigger than us’.  This year we’ll be watching from the safety of dry land. 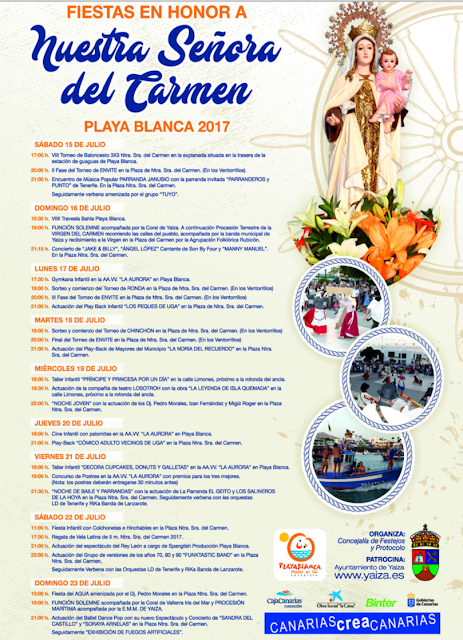 Join other contributors to this week’s Sepia Saturday, where our prompt image was a family watching TV aboard a boat.
Posted by Little Nell at 09:25 8 comments: