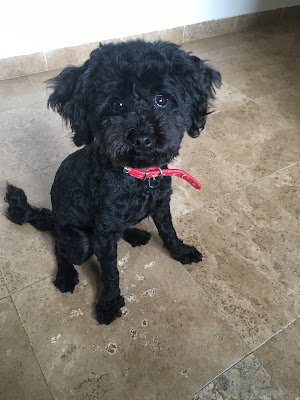 Yes, I do mean ‘tails’ but there are also ‘tales’ to be told. The prompt for this week’s Sepia Saturday shows Anna Finlayson, a 1959 Canadian beauty queen packing her bags for her next competition. It appears that her little dog is unhappy about being left behind and would like to be getting in that suitcase and travelling with her.

We have just become first time dog owners and now have to take another little soul into account when we make any plans for travel. Pico, aged fifteen months, was rescued from the pound when a puppy; unfortunately he was badly treated by his new owners, so has been doubly unlucky. Now that he has come to live with us we can see that there are a few issues we have to deal with, and the thought of leaving him alone to even go shopping has to be quickly dismissed whilst we start from scratch with house-training and building up trust. Eventually he will be able to to stay behind for longer periods, as he slowly gets used to our ways. Time, patience and lots of love, which we have in abundance, will help him defeat his demons. He’s already sleeping all night with no crying or accidents, and the greeting I receive in the morning is joyous. 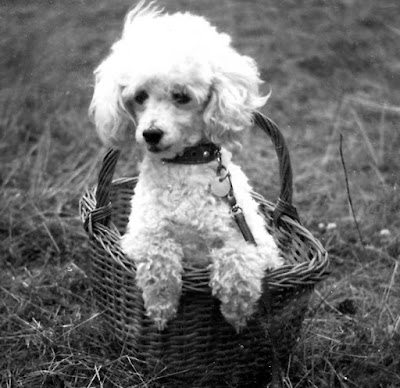 Although this is the first time we have owned a dog jointly, long-term readers of my blog will recall that when I was a girl I had a little white poodle who has often appeared in my blogposts over the years. He was a present for my eleventh birthday and lived for fourteen years; as I moved away to college and then got married, he became more of my parents’ dog than mine.  However, when I was thirteen, I travelled to Austria on an exchange trip for a month and although (as far as I know) Kim did not try to climb into my suitcase, nor pine for me whist I was away, I was homesick and missed my little companion dreadfully. My host family had dogs of their own, but they just didn't take the place of my own beloved pet.

This is my favourite picture of Kim sitting, not in a suitcase, but in my mother's shopping basket. It gives a good idea of his size, and although small dogs are often toted around in handbags, he never was. 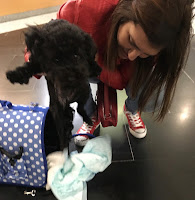 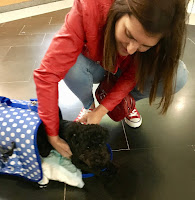 ............arrived in Lanzarote by air exactly a week ago today from Gran Canaria,  having travelled on the charity volunteer’s knee in a bag. It’s only a forty minute flight and allowed with dogs under five kilos. When we met them at arrivals I asked where the dog was and she pointed to her shoulder bag.

And there you have it in black and white travellers’ tails - which are constantly wagging. 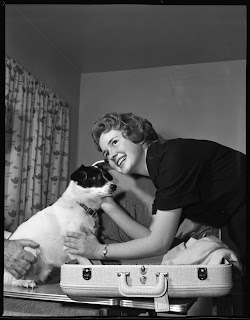 Join other travellers and their best friends for this week’s Sepia Saturday, to see what they made of the prompt, which come courtesy of Vancouver Public Library, via flickr commons.
Posted by Little Nell at 05:27 9 comments: