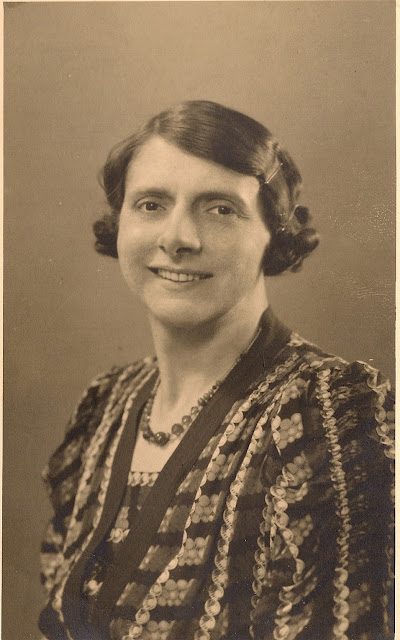 This is Mary, one of my grandmother’s many sisters, and the only one who never married. She was born in 1905 and lived into her early eighties. By the time of the 1939 census her mother and her eight other siblings had married or died, and Mary is listed as still living at the same house that the family occupied at the time of the 1901 census. Now it was just her and her father, and a lodger, Elsie.  The ladies were both listed as working in a ‘Chemical Food Factory’, but which we know was actually manufacturing Ovaltine. She wasn’t blessed with film star looks, but she was loving and kind. She was a generous aunt and great-aunt, and like my mother before me, I would receive cards on my birthday, usually with a ten shilling note enclosed.She would also send me holiday spending money in the Summer and at Christmas, and a chocolate egg at Easter. Her cards were always signed ‘Your aff Auntie Mary’ (aff= affectionate).

When my great-grandfather died, in 1953 Mary remained in the little house in Watford. Elsie had also remained unmarried and still lived in the same house with Mary, into old age. They continued to work together as far as I know, and were good company for each other, taking holidays together and visiting my grandparents in Nottingham.

I only have a few pictures of Mary and I realise that I know very little about her. I do know that she worked hard all her life and that when she retired at the age of sixty, we all went along to her retirement party. Judging by the few pictures of the event, she obviously had a sense of fun. The party wasn’t just an excuse to eat and drink but to play games as well. This was 1965, and it was what you did in those days. You didn’t sit in a corner with your phone or iPad, you sang, danced, played games and had what was known as a ‘knees-up’!

You can get a flavour of the party from the photos below; my grandfather taking part in some water balancing game and my ‘aff Auntie Mary’ being affectionate to my Dad, by grabbing him for a great big kiss. It was all good clean fun; there were children present, and the party probably finished during the afternoon. 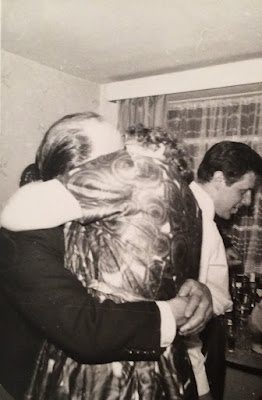 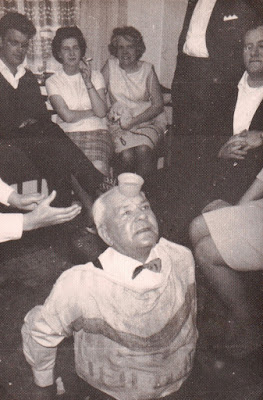 When I was a married woman, and living in my own home with two small children, my parents brought Auntie Mary to visit us, and meet her great-great niece and very new great, great-nephew. It’s the last time I remember meeting her and a happy occasion. It looks as though my daughter has presented her grandma, my Mum, with her dolly and Auntie Mary would have enjoyed watching the children play. 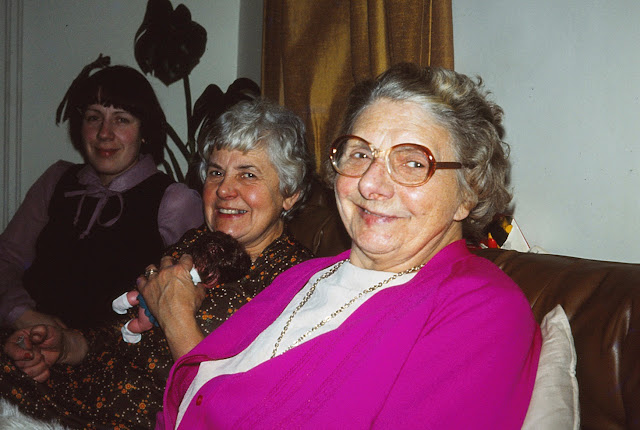 Join us at Sepia Saturday, where our theme for this month is work and play.