Today is St George’s Day, and I thought that rousing quote from Shakespeare’s Henry V was a good reminder of England’s patron saint, as well as remembering that this is the day we celebrate Shakespeare’s birthday in 1564*. George appears to have been adopted by Richard the Lionheart during the Crusades and thus went on to become the emblem of chivalry and victory of good over evil. He is also recognised by many other countries, as either their patron saint or, as being an important figure in legend. There are therefore many images of him, sword in hand, slaying the fearsome dragon.

Fellow blogger Brett Payne provided this first photo, taken in Plaza de San Marcelo, Leon in 2013, when Brett was walking the Camino de Santiago. I was holidaying with my husband in Northern Spain at the time and we had engineered an historic meeting in Burgos with Brett. We went on to visit Leon the next day whilst Brett took a short break from the Camino to see Madrid and arrived in Leon a few days after us. I had failed to get a decent image of George and so Brett kindly shared his own great photo. St George and his strange looking dragon were over the entrance to a bank; perhaps as a warning not to try any funny business. The building, Casa Fernandez y Andres, also known as Casa La Botines, was designed by the architect Antoni Gaudi, famous for the Cathedral La Sagrada Familia in Barcelona. His friend, Llorenc Matamala executed the wonderful sculpture, preparing the plaster model on the Sagrada site, to Gaudi’s instructions and under his watchful eye. When the statue was taken down for restoration in 1951, a lead tube was found behind it, inside of which were the original plans for the whole complex and signed by Gaudi.** 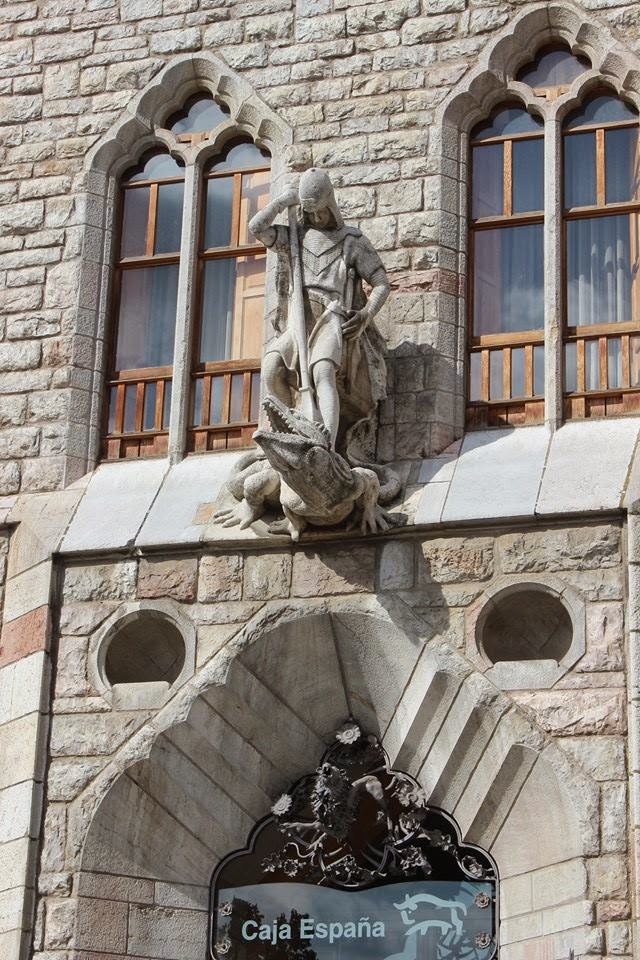 The following year I noticed George in Cordoba, Andalusia, on the walls of the Cathedral. Now I shall be on the lookout for him everywhere. I haven’t seen him in Lanzarote, and don’t think that’s very likely, but I hope to spot him when we return to Northern Spain later in the Summer. 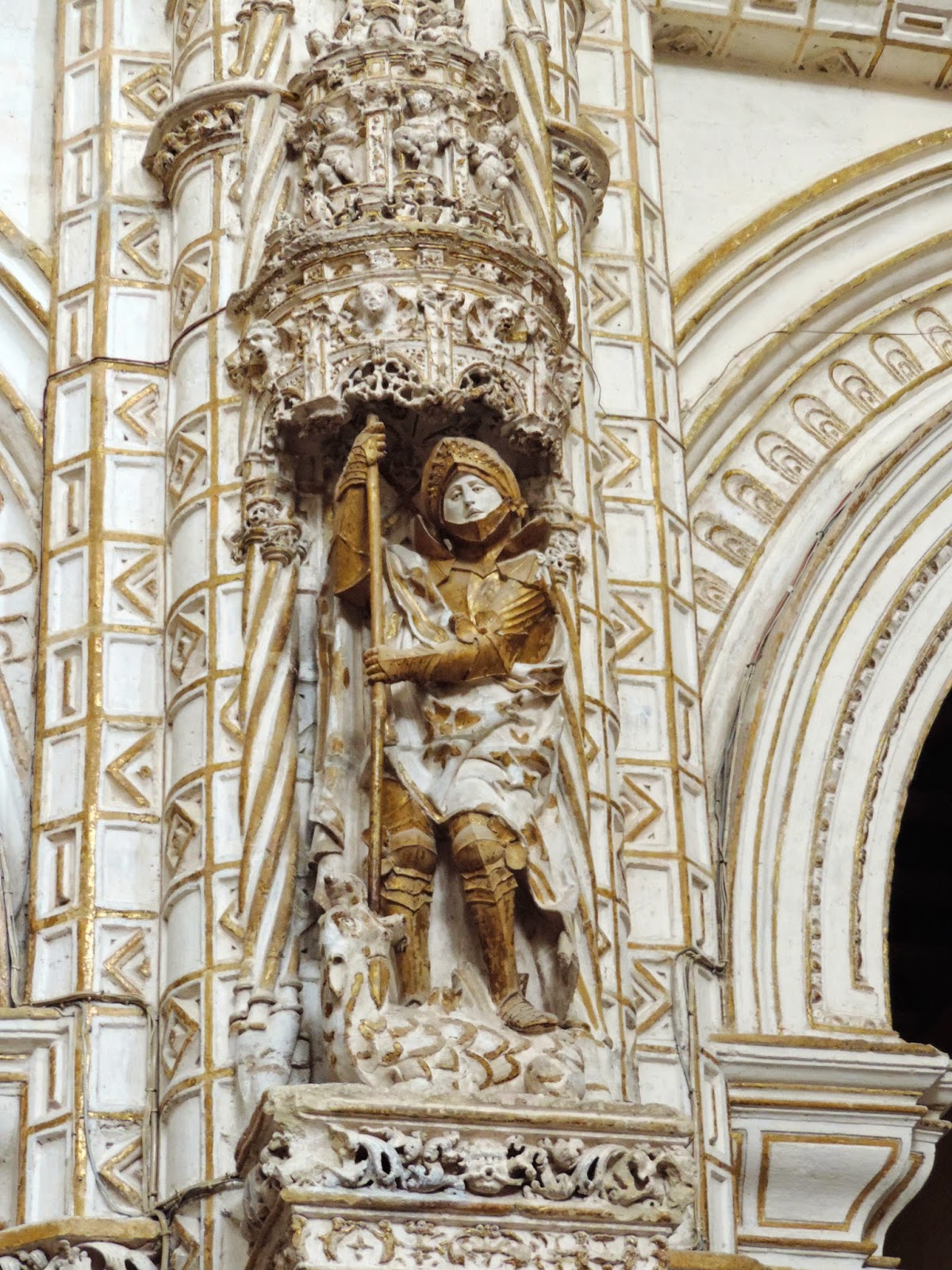 When we lived in Salisbury, England, I took this picture, in the late 1990s, of Gilbert the Dragon who appeared at various locations throughout the city, courtesy of the Parks Department. He was made up of over 6,400 plants, mostly sedums, and weighed one and a half tonnes. I don’t think he’s a particularly ferocious looking dragon, despite the cage surrounding him, and would be more likely to be adopted as a pet by Saint George, than slain with a sword. As far as I know he still appears each Summer in the city centre and is something of a tourist attraction. 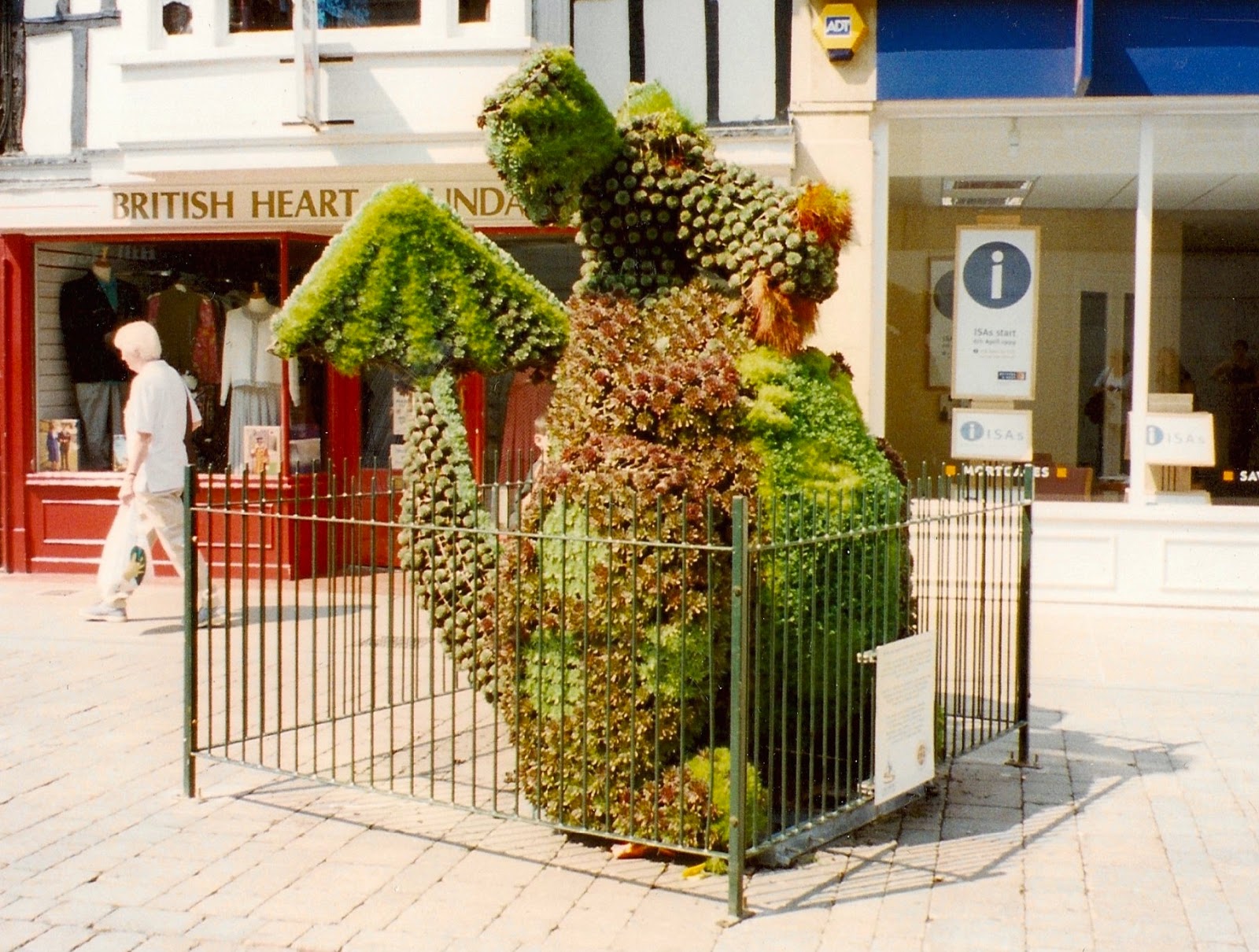 Salisbury is also home to the giant Christopher and the beadle Hob-Nob, who are now part of the St George’s Day parade in the city. The Giant has a long history, the roots of which are uncertain but seem to be linked to folklore. The original was paraded on many historic occasions and is now housed in the city’s museum; his modern contemporary joins the Sarum Morris men for Riding the Jorge, a re-enactment of a medieval pageant when George fought and valiantly killed the dragon.


There will be celebrations and parades all over England over the next few days. Have a great St George’s Day/Weekend wherever you are, and may the sun shine on your parade.

This is my submission for Sepia Saturday. Join the parade and see what others have contributed there in the way of old photos and history.

* "Partly because many babies died soon after they were usually baptized, as the Prayer Book recommended, no later than 'the Sunday or holy day next after the child be born’. for centuries now, Shakespeare’s birthday has been celebrated on 23 April, which happens to be St George’s Day, and is also the date on which he died.” Professor Stanley Wells ‘Shakespeare For All Time’. 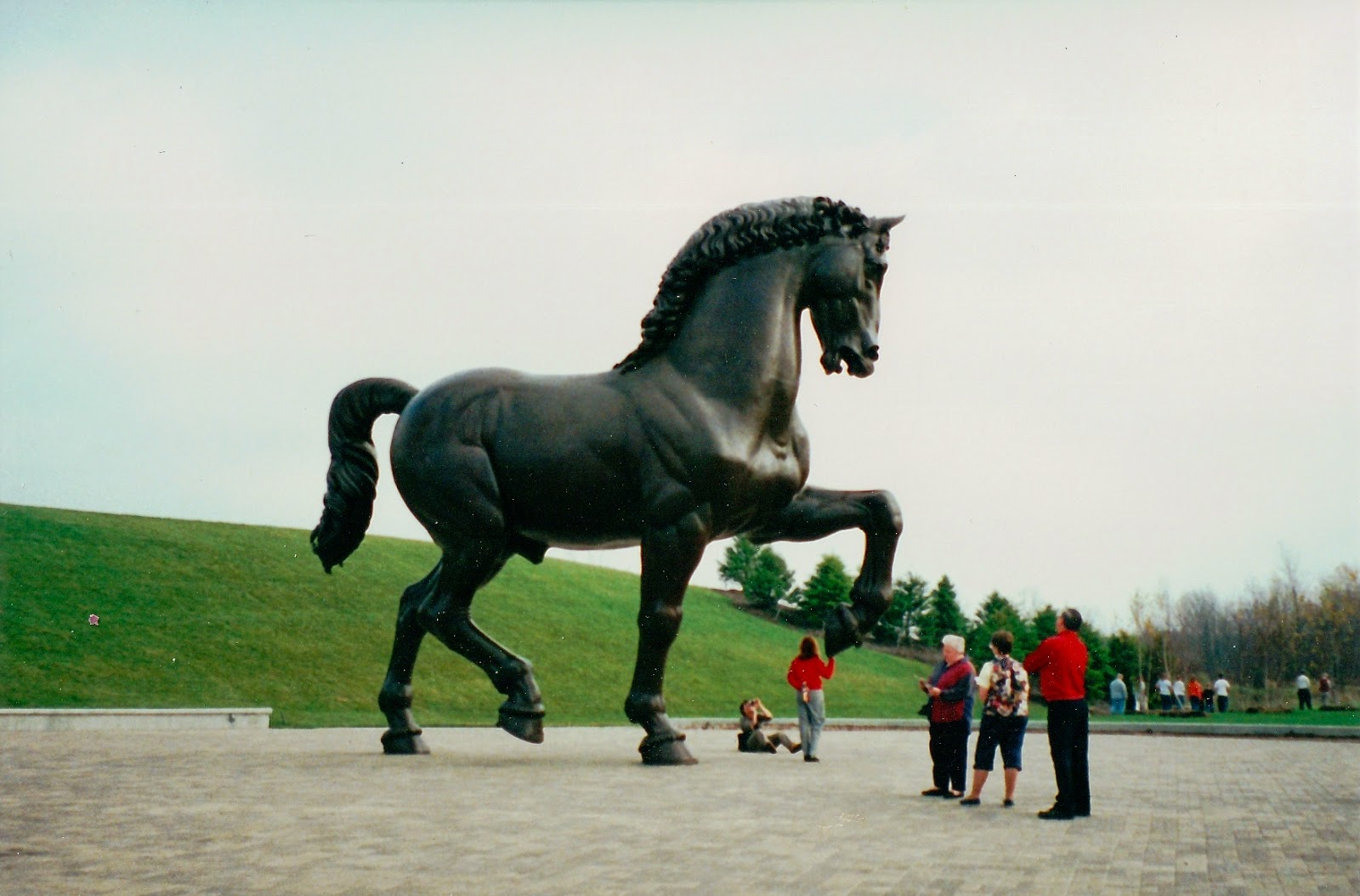 That is one mighty horse! In 2000 we went to the USA to visit friends and family near Michigan. Our friends in Grand Rapids took us to the Frederik Meijer Gardens, where we encountered the gigantic fellow above. 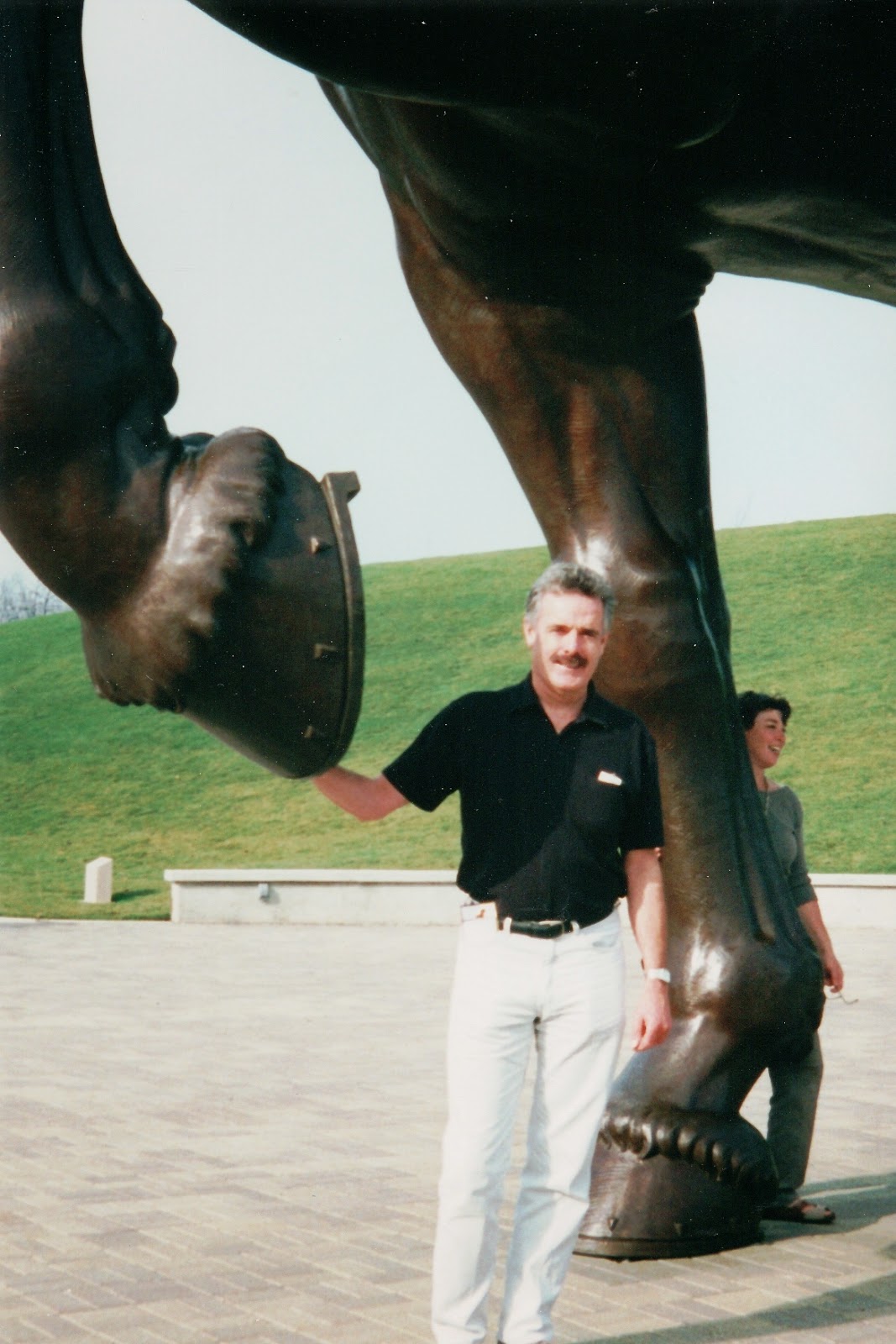 Here’s my husband admiring the statue at close quarters, just to give you an idea of scale. I still have the leaflet which tells the story of ‘Leonardo da Vinci’s Horse; the 24 foot masterpiece’ and this modern realisation (click to enlarge). 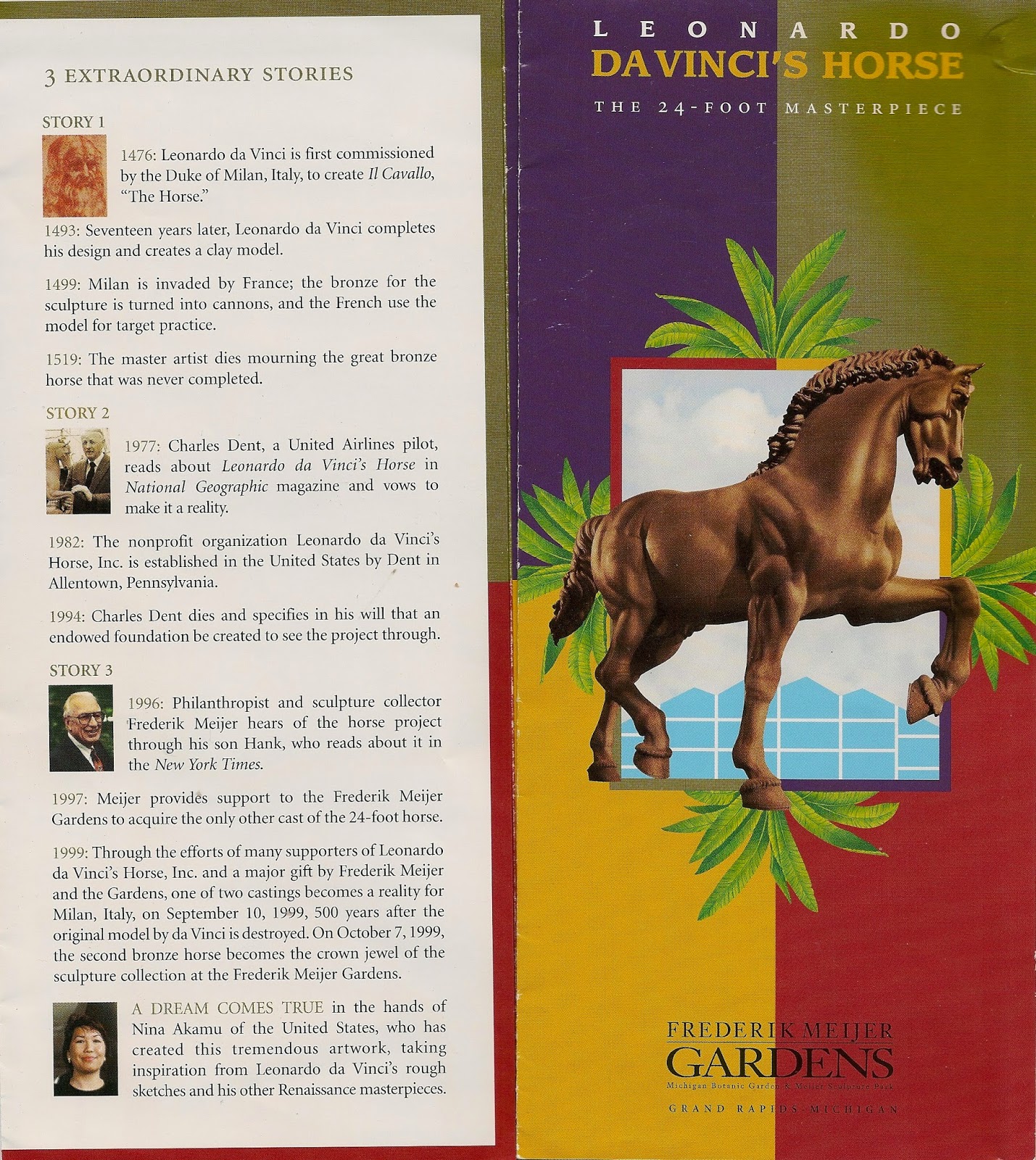 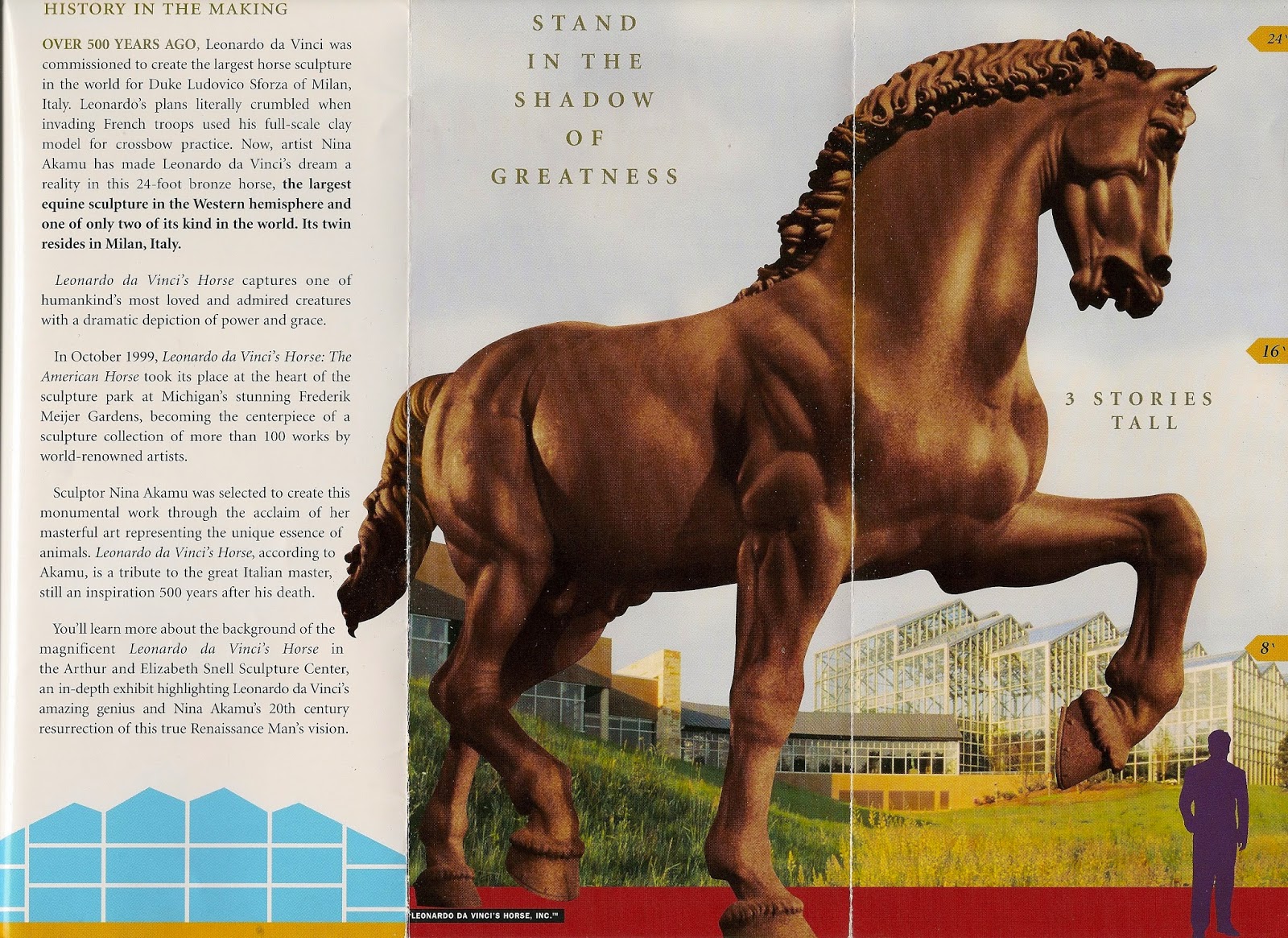 There are many monumental sculptures of heroic and chivalrous figures, some real, some legendary, around the world. For instance the statue of El Cid, which you may remember from my blogpost Beguiled by Burgos, where the human subject is the focus; in this wonderful piece of art above, there is no doubting where the power lies. 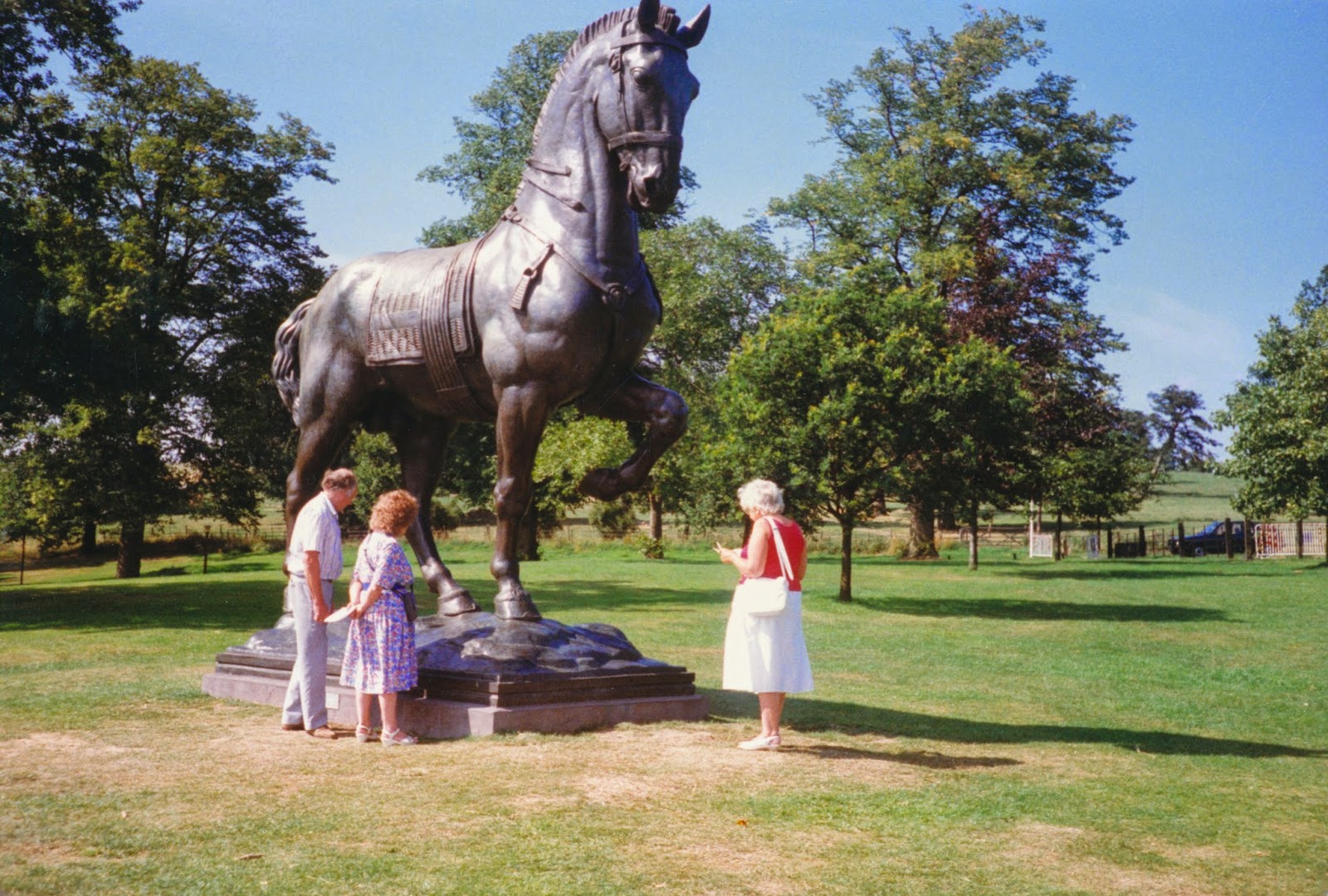 I was pleased to discover, in my parents’ albums, this photograph of my mother, studying a strikingly similar example at the West Yorkshire Sculpture Park in August 1989, when the statue was on temporary loan from France. Smaller, yes, but still a powerful image. I don’t know anything about the sculptor in this case, but I can still admire the artistry involved.

Finally, here is a link to the artist Amy Goodman’s site, which shows the progress of her War Horse statue, a permanent memorial to the thousands of horses shipped into battle during WW1. About 120, 000 of the 1.3 million horses and mules involved in the conflict, passed through a giant military depot  near Romsey, Hampshire, where they and their handlers were trained; only about ten horses survived the war. Here you can read the story behind the memorial park and statue.

This week’s Sepia Saturday had a poster which hinted at horses and power.

Visit other Sepians to see how they interpreted the prompt above. 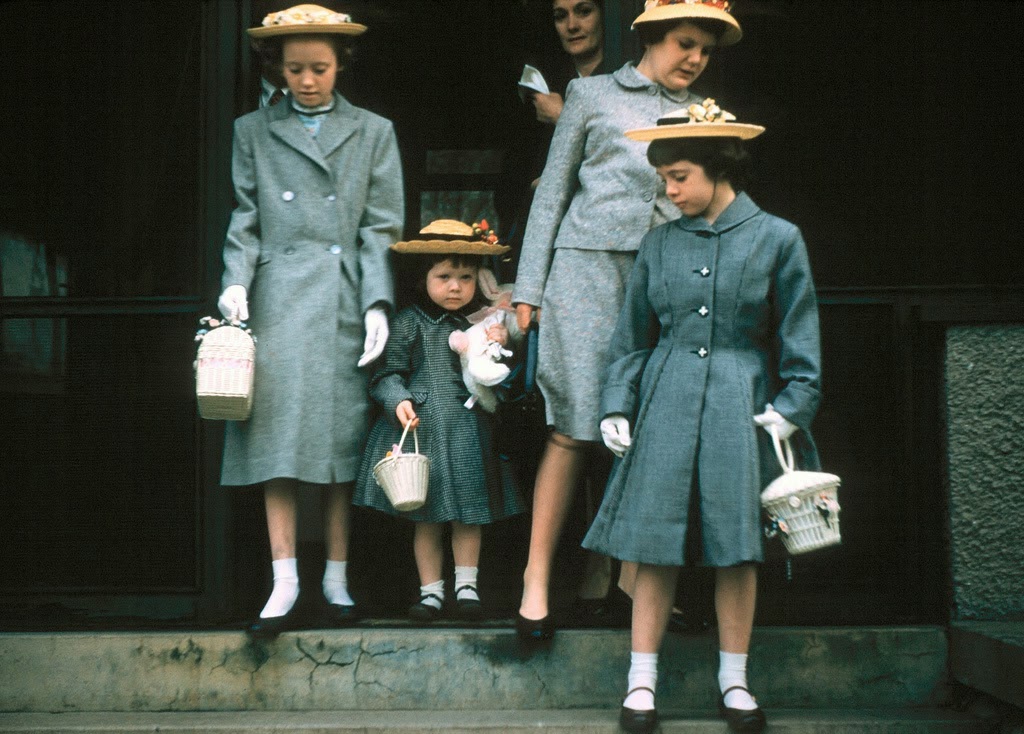 Stepping out from church with Cissie,
In my Easter Sunday Best,
Little bonnet decked with flowers,
Clutching Bunny to my chest,
Holding tight my wicker basket,
Wondering what will happen next.

One white sock needs hoisting up,
And Mary says my shoe’s undone,
Daddy wants to take our picture,
This isn’t really any fun.
I just want to run to Mummy
Go home for my hot cross bun*.

Daisy says it’s time to leave now,
We’ll be there in just a while,
After lunch there’ll be surprises,
Something sure to make me smile.
Chocolate eggs to fill my basket,
Rounding Easter off in style.

I have memories of dressing up for Easter and when I was small my Great Aunt, living in America, sent me a new dress and gloves to be worn to church on Easter Sunday. 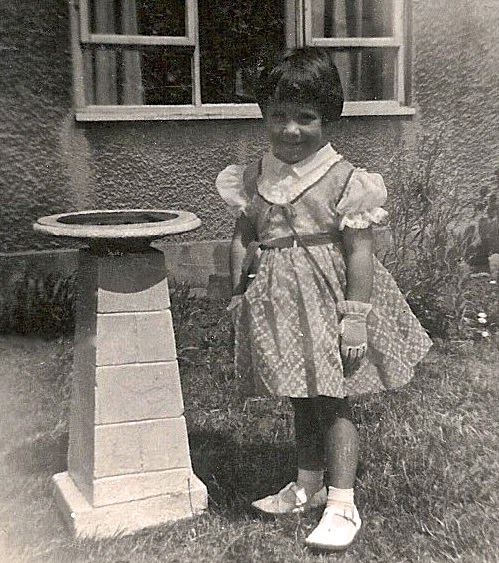 This piece was inspired the photograph at the top of the page and posted by Tess of Magpie Tales creative writing group.

Email ThisBlogThis!Share to TwitterShare to FacebookShare to Pinterest
Labels: Easter, poems, the mag

Girl on a Bicycle 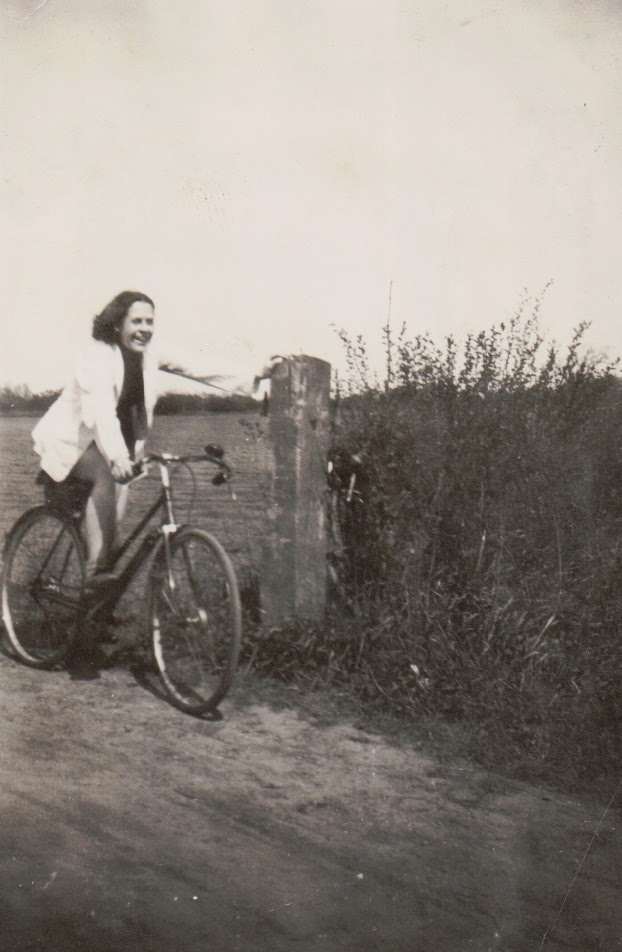 The girl on the bicycle in my picture is my mother, sometime in her late teens. Mum is 94 now and she can’t remember the brand or model of her cycle. My family are from Nottingham, where the world famous Raleigh Bicycles were originally made, so it would be nice to think that this was an example of the kind of product the company was turning out. To me it is indistinguishable from others of the era and I can’t read the badge.

Mum remembers that her bike gave her lots of freedom, she would use it for day-to-day getting around, such as cycling to the local tennis courts and on long Summer evenings she would cycle to Newark and back (about 38 miles); she was clearly very fit! She still speaks with pride about the fact that it had drop handlebars and wasn’t a 'sit-up-and-beg'. 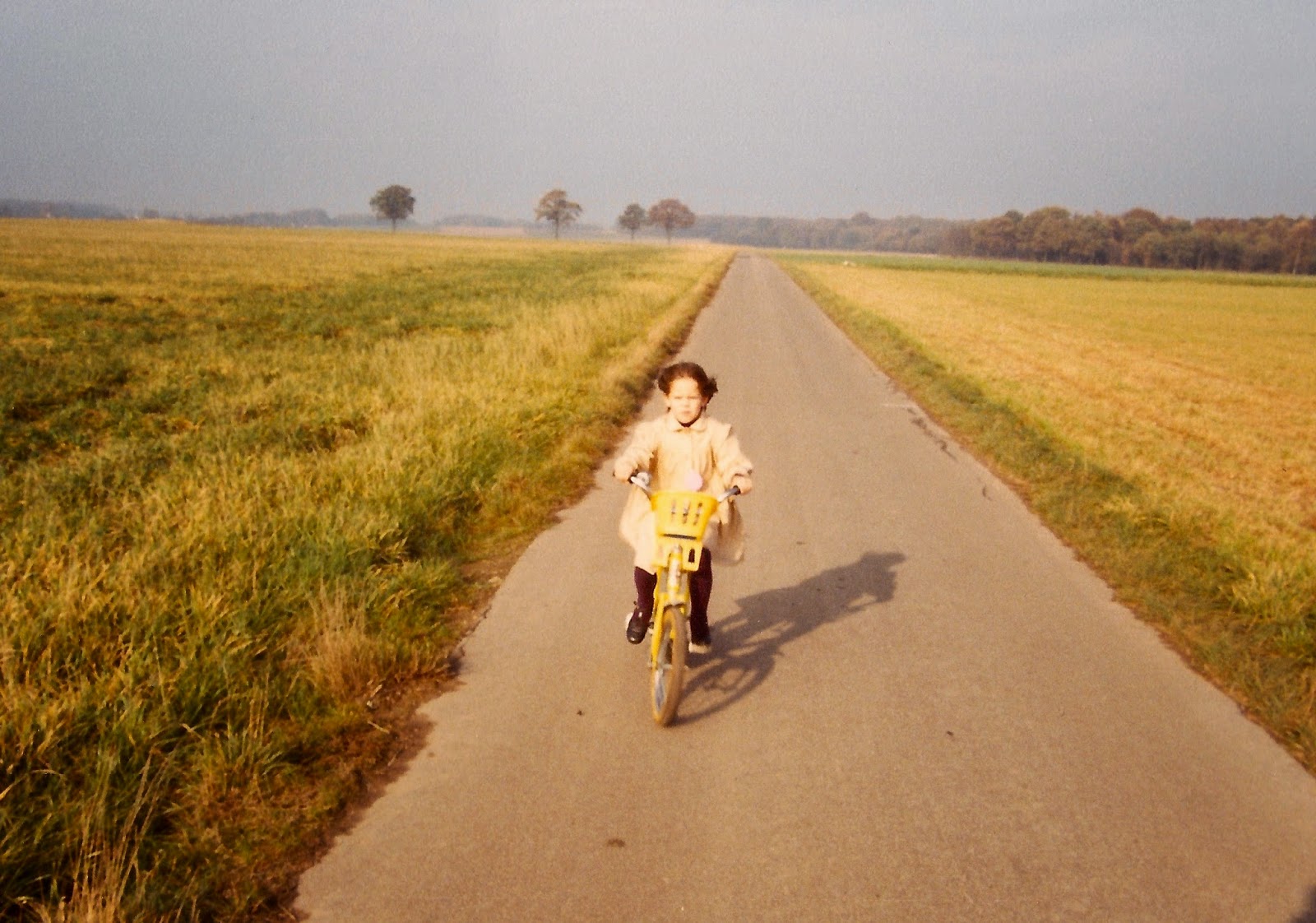 This is my daughter somewhere around 1982, aged about six and demonstrating her first ride without stabilisers. We were stationed in RAF Germany at the time and her Dad had taken her out to practise on the quieter roads. Suddenly it clicked - and so did he - a milestone captured for ever.

The companion piece to this post features my Dad in ‘Boy on a Bicycle’.

Take a ride over to Sepia Saturday and see what other contributors made of the prompt above.