A Record of the Past 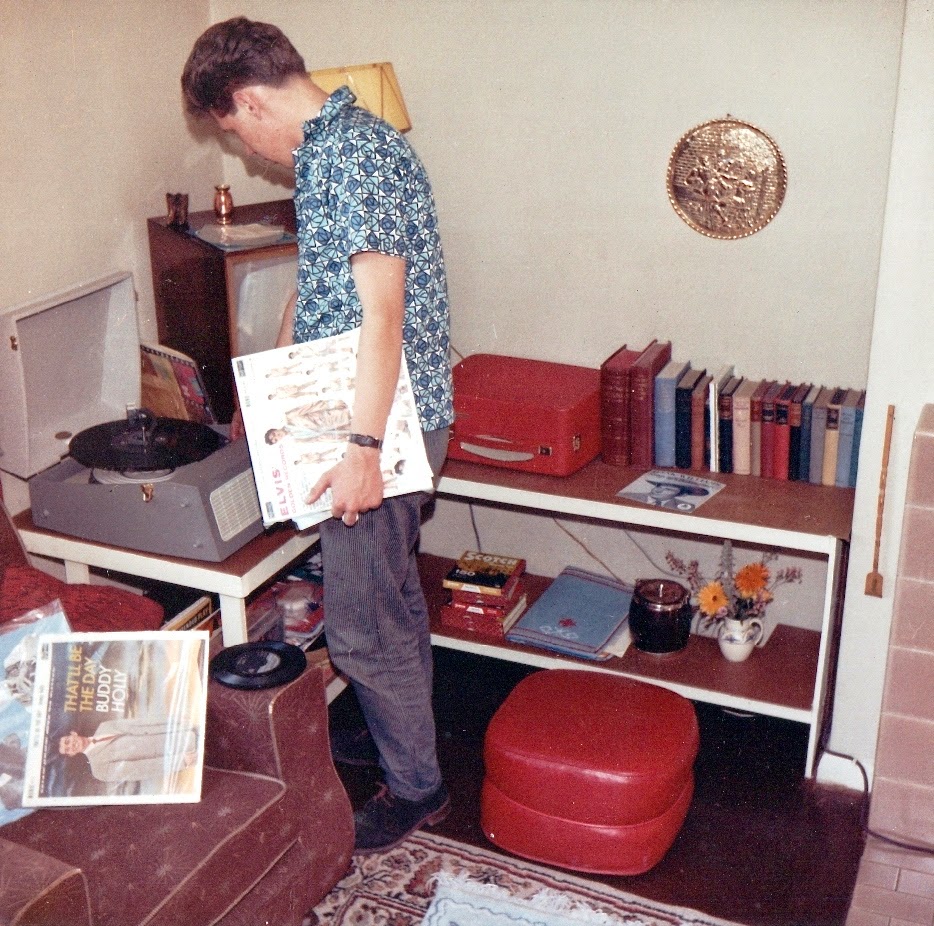 The picture of my brother is from c1962, judging by the record albums on display. My brother is eight years older than me and at that time was a big fan of Buddy Holly, Elvis and Don Gibson, so I grew up with that music.

By the time I was a teenager myself I was moving from Tamla Motown, to heavy rock, and then folk as I discovered the delights of the record player. This may explain why my taste in music is somewhat eclectic to this day.

This would have been taken by my father, and probably specifically to capture my brother’s music hobby and range of albums. Thank goodness he did, because the picture is full of detail of our family Living Room that would otherwise be rather shadowy memories.

The corner unit was made by Dad to house the ‘entertainment’ section of the room. As well as TV, there was a bright red reel-to-reel tape recorder with which we had hours of fun. It was used to record a 1970 Christmas message to my great uncle in Australia and I later transferred it, via c90 tape and CD, to digital. When I play it now I can hear my own grandfather talking to his brother and my newly born niece murmuring in her cot. There too are my youthful-sounding parents and a teenage me, all recorded in that very room.

The record player belonged to my brother; he gave it to me when he left home and it went to college with me in 1970, only being superseded by my pride and joy in1973, a Fidelity UA3 Radio Master which was of course stereo! Yes, those albums my brother is playing would all have been mono recordings and we were yet to discover the exciting stereo sound. On the shelf below is a rack of singles; the albums were on a separate unit. On the armchair is Buddy Holly’s final album, ‘That’ll Be The Day’ and my brother is holding Elvis Presley’s '50,000,000 Million Elvis Fans Can’t be Wrong’. Between the television and the record player is Elvis's 'Blue Hawaii'. I remember seeing the film at the local cinema and I believe I can still sing most of the songs. That’s a Hank Williams EP in front of the books, 'Sing me a Blue Song’, but I can’t identify the album beneath Buddy Holly. 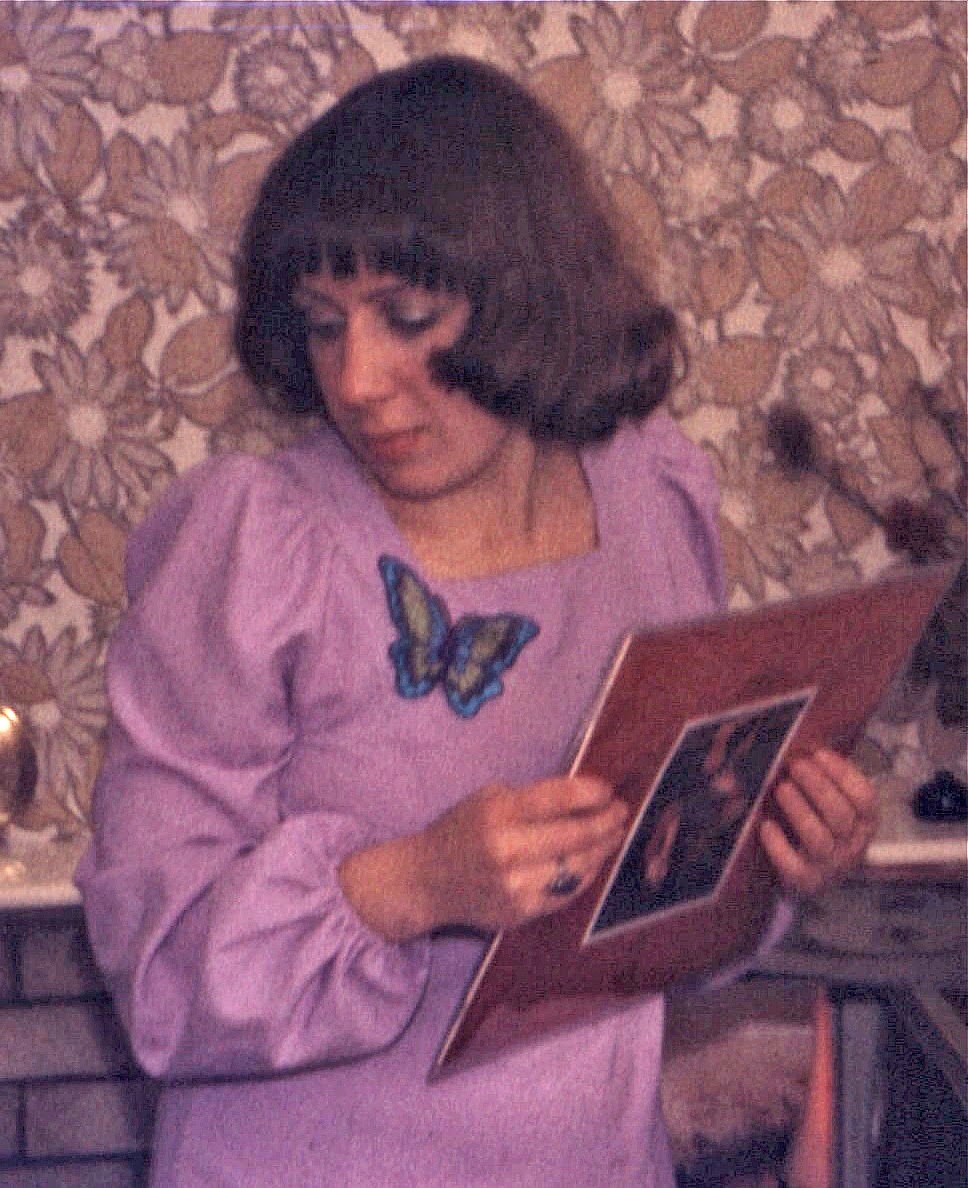 In January last year we had some fun on my blog trying to identify the title of the album  I am holding in this 1974-5 photograph. The mystery was eventually solved, as one or two of my readers will remember. I used it to illustrate a poem I’d written, Just For the Record.

We no longer own any vinyl albums, except for one, my husband’s copy of The Beatles’ ‘Abbey Road', but we’ve nothing to play it on and I think it would be full of clicks and clunks.

Join us this week on Sepia Saturday, where you can see what other contributors made of the musical prompt below. Time for a 'Jukebox Saturday Night’.

“There’s rosemary, that’s for remembrance; pray you love, remember. And there is pansies, that’s for thoughts.”  Shakespeare, Hamlet 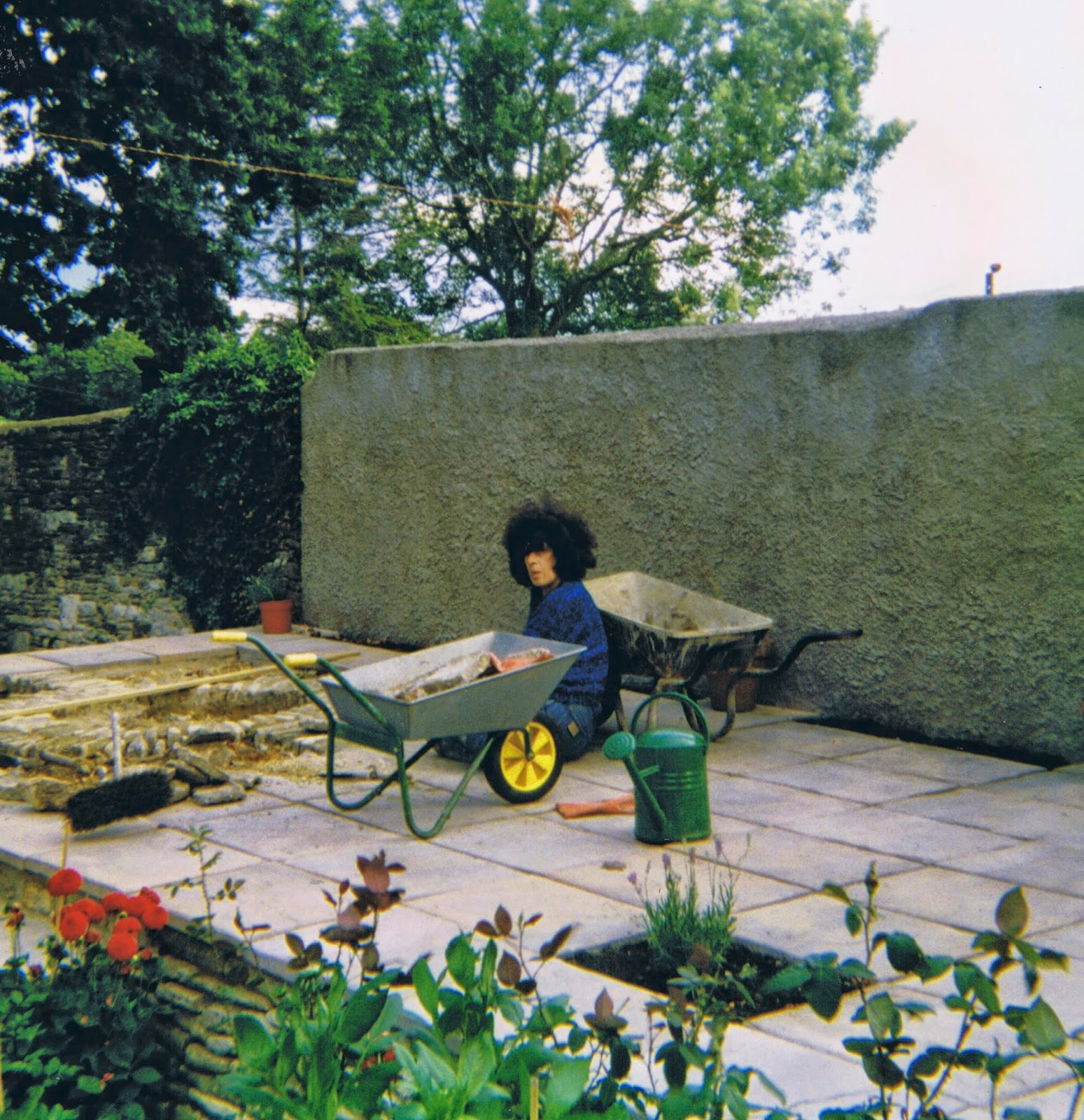 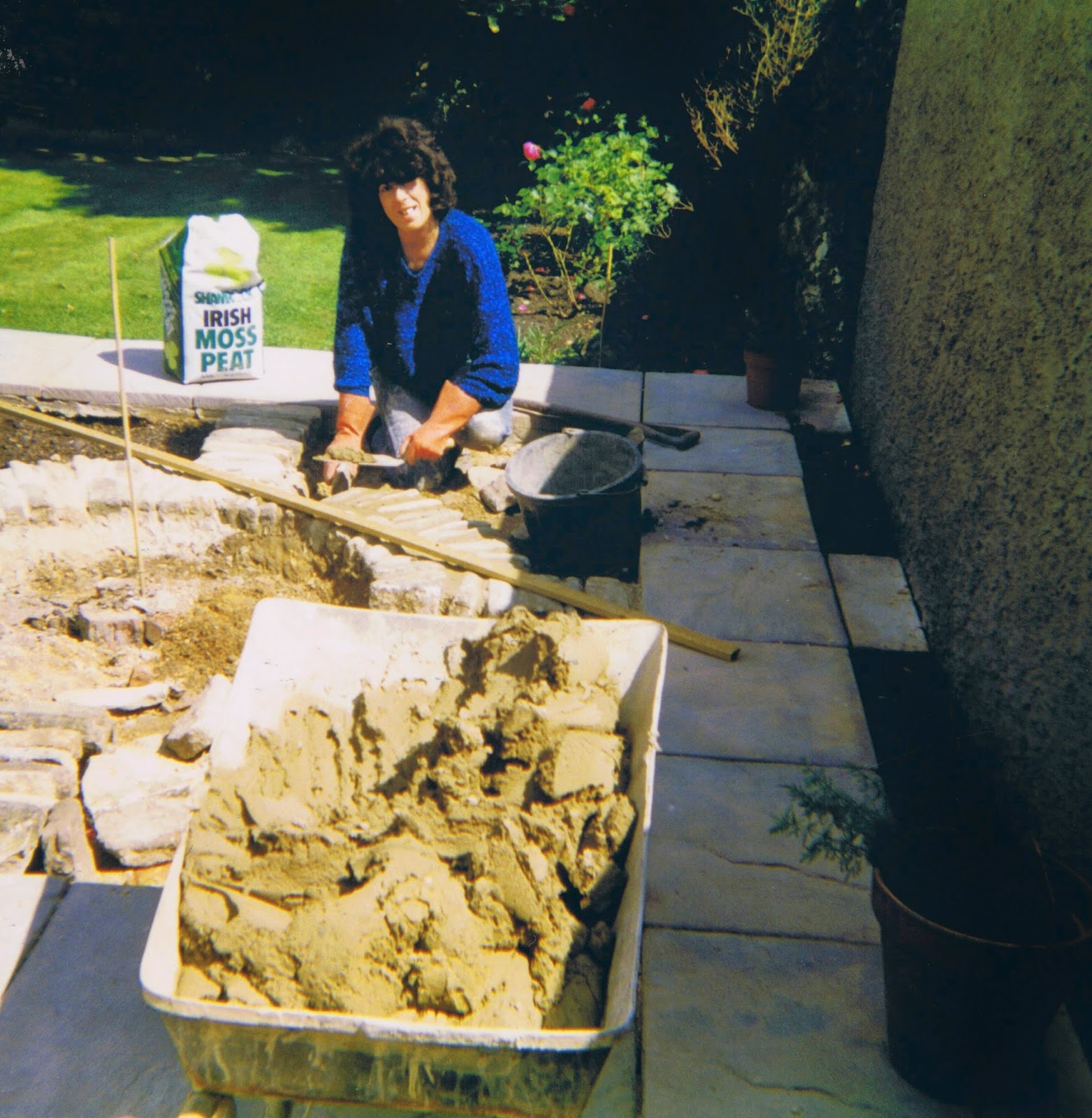 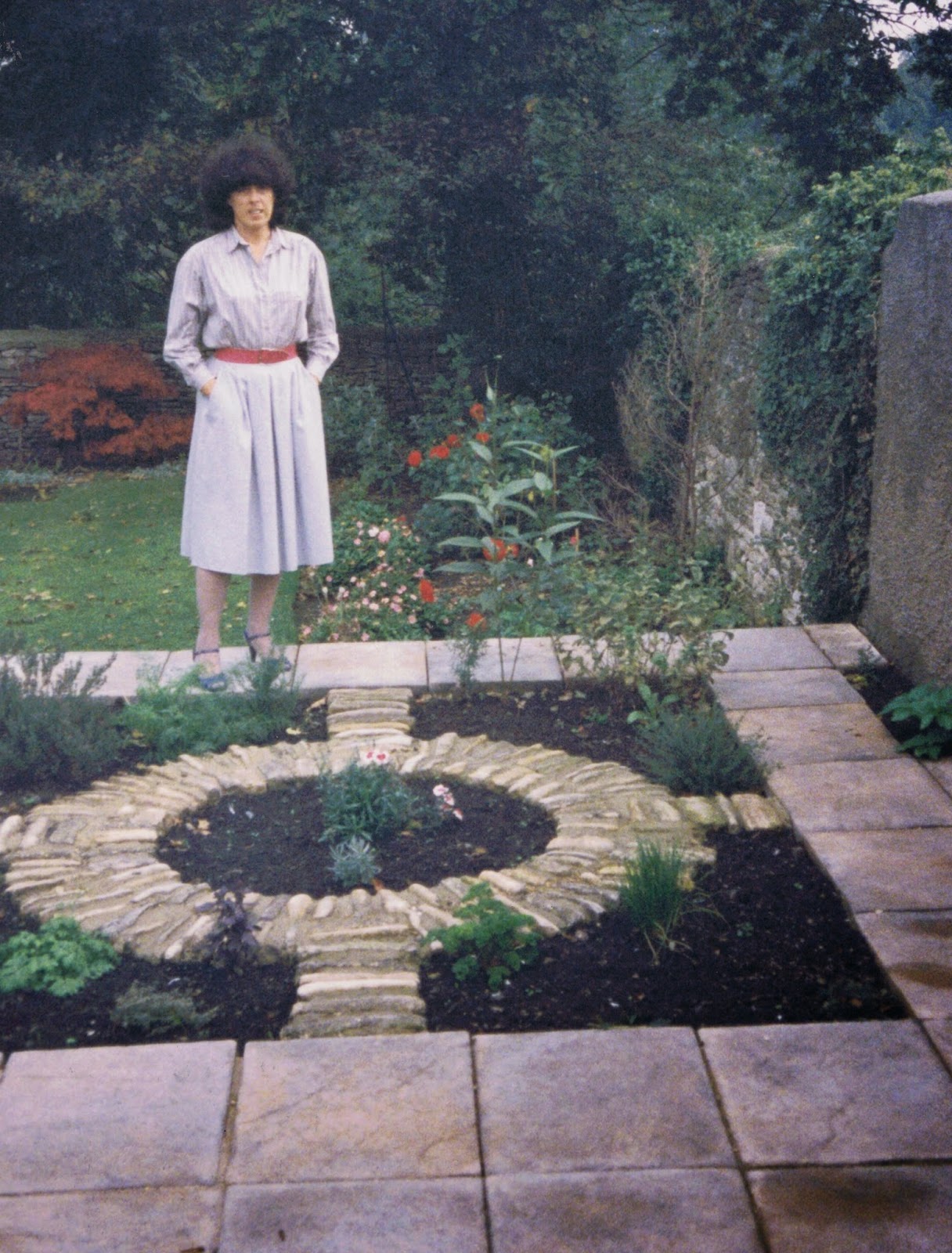 This sequence of photos show my talented and creative late sister-in-law, Gillian, in the process of designing and making from scratch, her herb garden. We have only recently seen them as they came from her own albums, which have been  scanned by the family following her death at the end of 2012.

In the 1980 she and her husband took over an hotel in the Cotswolds and turned it into holiday apartments. They then set about converting the old skittle alley, attached to the building, into a cottage which would be their home. Not content with this achievement, Gill went on to carve a lovely garden from the grounds and single-handedly made dry-stone walls and seats as well as the above herb bed.

I don’t know what it looks like today, as when they retired they sold the business and cottage and moved to a new house. However, the garden does feature in the occasional snap from my own album. 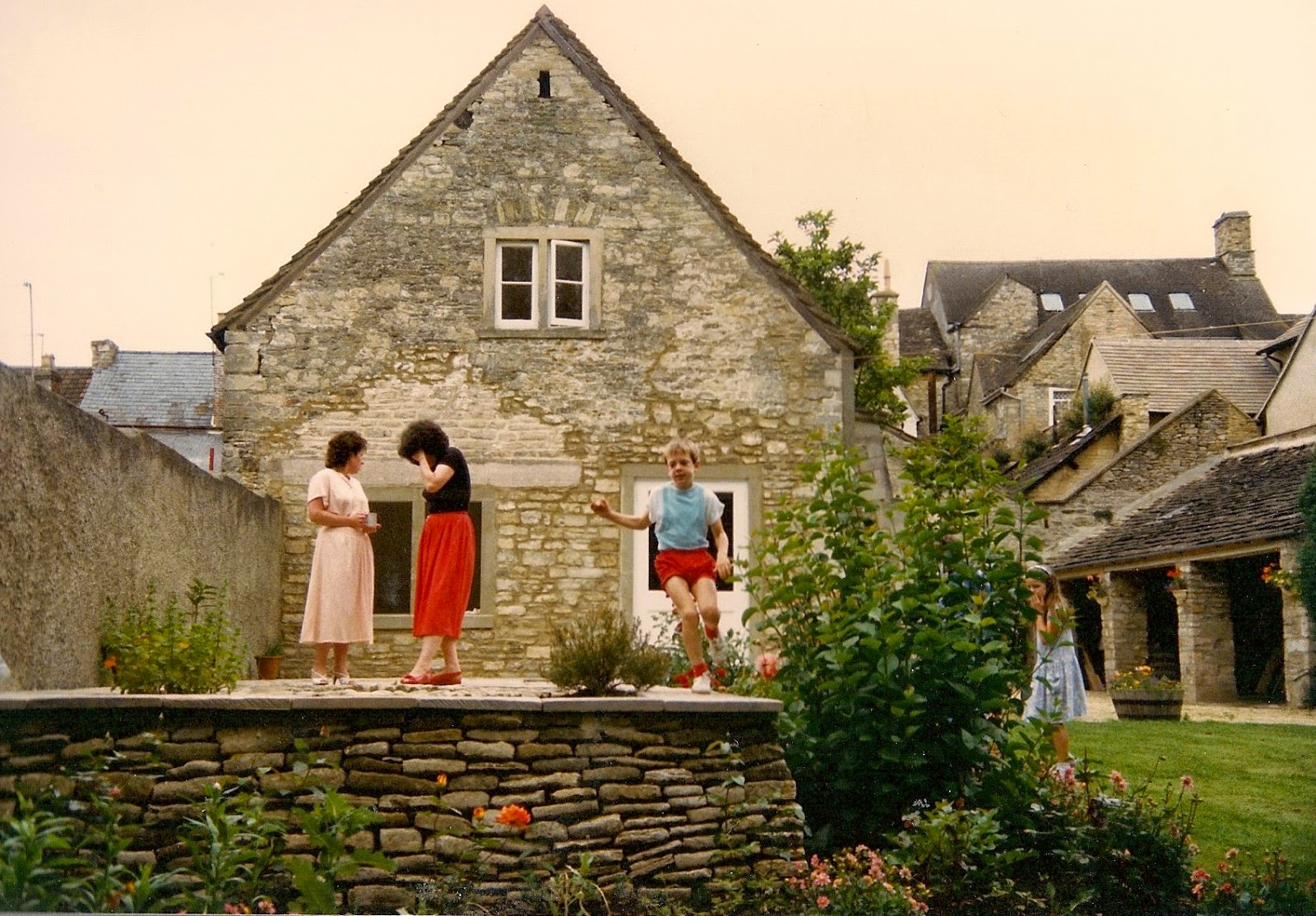 In the snap on the right, where my son is jumping from the patio, Gill and I can be seen admiring the herbs garden’s progress. I appear momentarily distracted by something and my daughter is probably talking to her grandmother (hidden by the tree) who is seated on the stone steps, judging by other shots taken on the day.

"For you there’s rosemary and rue; these keep
Seeming and savor all the winter long.” Shakespeare, The Winter’s Tale 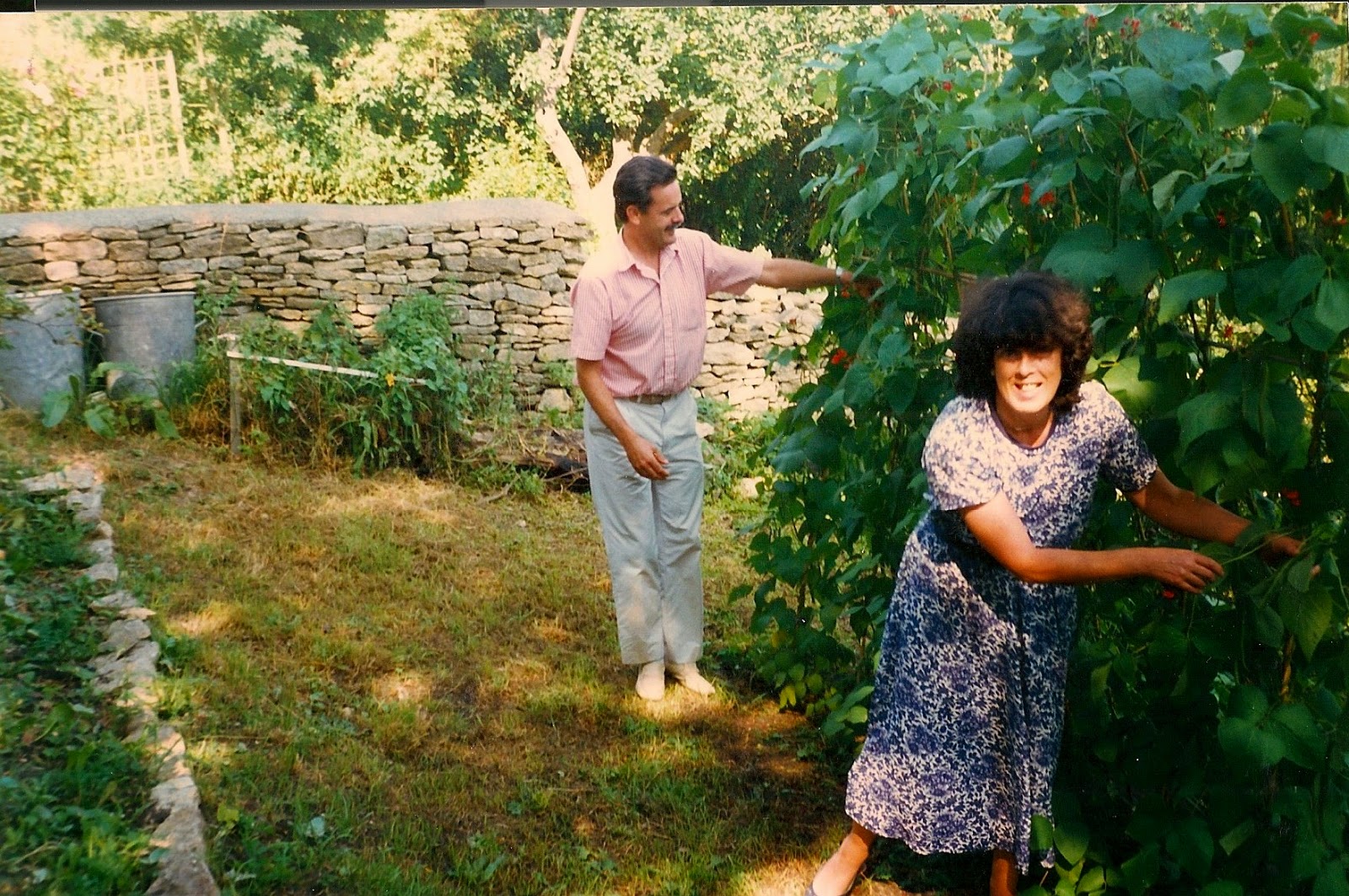 Gill also grew vegetables and flowers and here she is with her brother (my husband) as they show off the runner beans. It looks as if it would be a good harvest that year.

And on the same day Gill and I sit on one of the smaller patio areas. 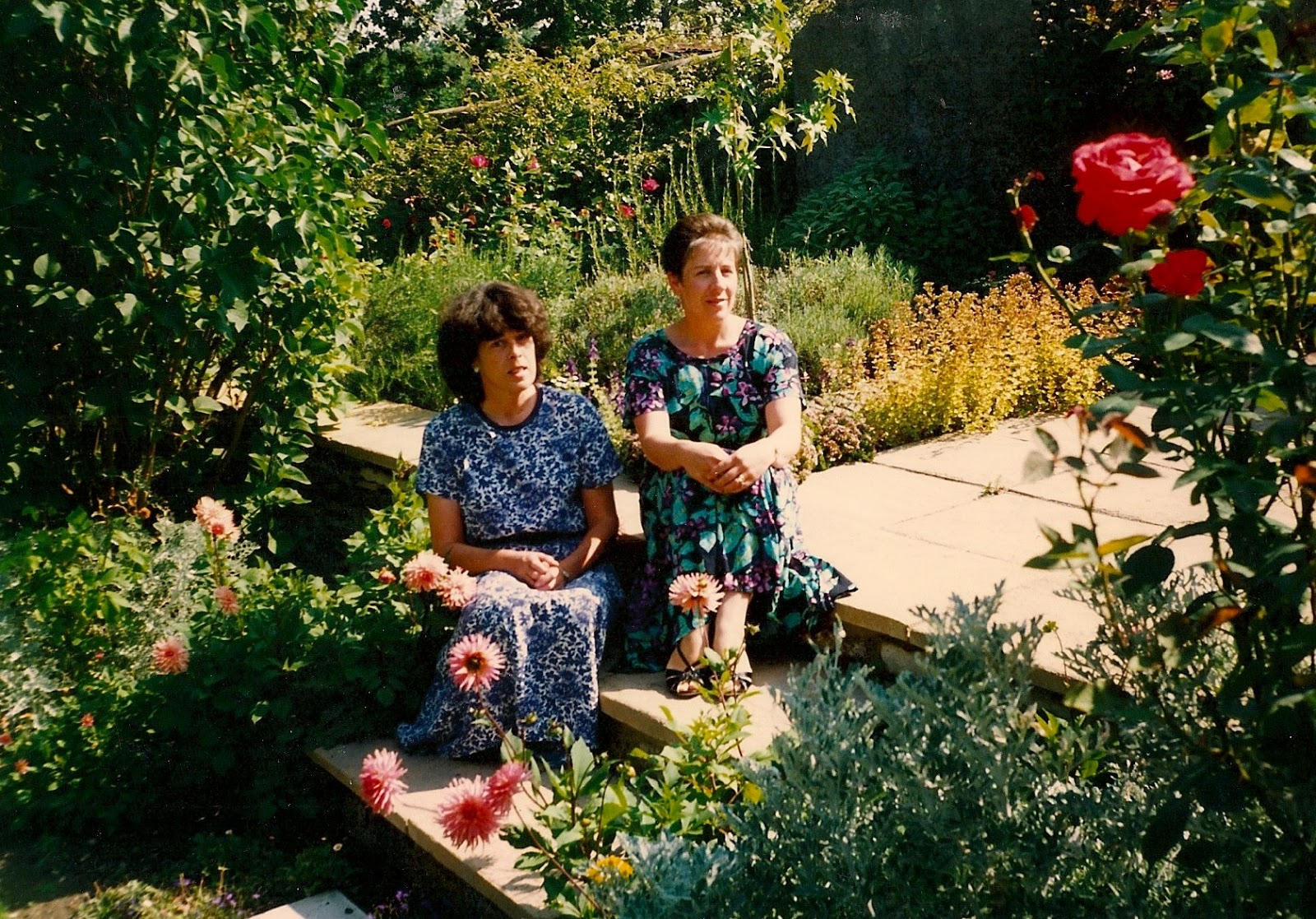 I can see roses, dahlias, spiraea and what looks like lavender and even more herbs. In the foreground there is a contrasting silver-foliage. This little area almost looks like a secret garden; what a wonderful place to escape to with a book. 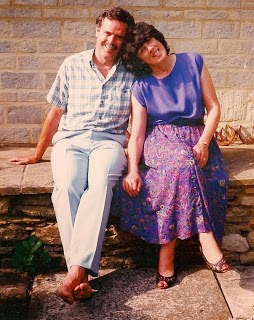 I’ve shown the picture of Gill and my husband before, but it’s my favourite so here it is again. They’re seated on the stone wall seat near the house and the Cotswold stone is shown at its best in the warm Summer sun.

It’s Shakespeare’s 450th birthday on the 23rd of this month, so I chose some of his words to enhance the post. It’s also St George’s Day on that date. St George is England’s patron saint.

For more garden memories visit this week’s Sepia Saturday, where contributors are inspired by the prompt below. 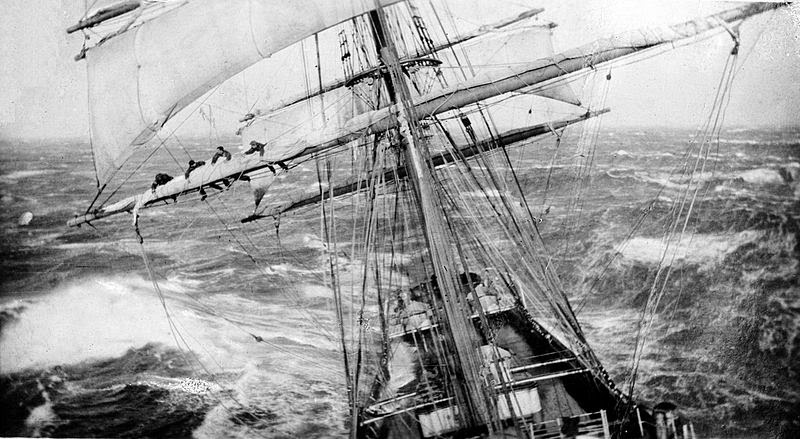 The picture above c1920, comes from The State Library of Victoria, and shows sailors ‘high up in the rigging’ of The Garthsnaid. That’s all we know I’m afraid, but I thought it would serve as my contribution for this week’s Sepia Saturday, where the photo prompt shows some men enjoying a rather lofty vantage point and we are encouraged to think of the concept of danger.

By chance two other items led me to the Garthsnaid picture. The wonderful Europeana blog reminded us that this week was the 125th anniversary of the opening of the Eiffel Tower, and pointed us in the direction  of these quite hair-raising pictures of men working on its painting. I’m away next week so I’ve made a quartet of photographs as suggested by the prompt for Sepia Saturday number 223 to cover both weeks. 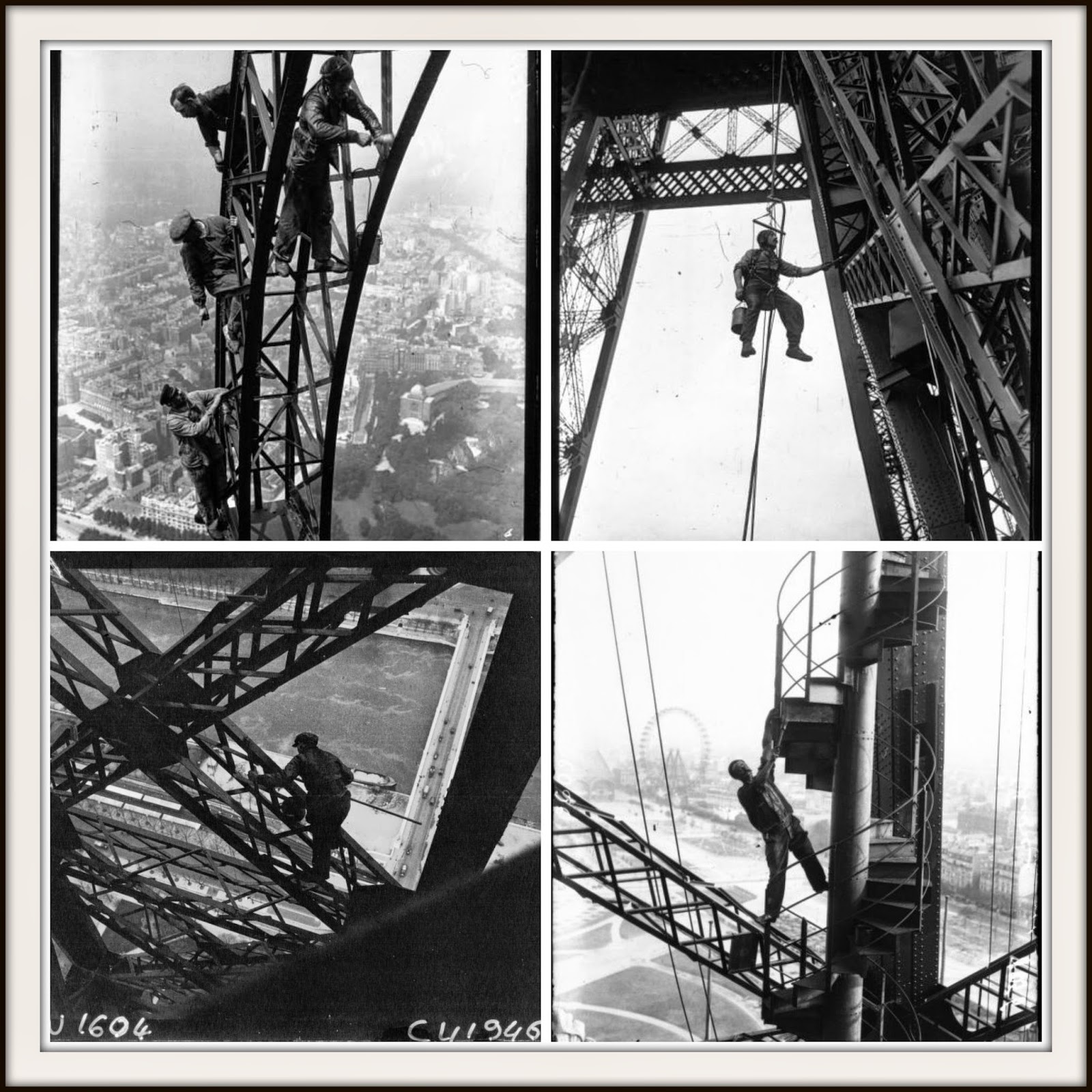 Then, in today’s newspaper I read that the SS Great Britain at Bristol Docks, was inviting visitors to experience life as a Victorian seaman and take a walk up the rigging. I can’t show the picture of course but follow the link to Climb the Yardarm and you will see a scary enough photograph of a brave soul dressed as Isamabard Kingdom Brunel, the designer of the ship, doing just that. You can find out all about it on the Bristol Culture web page and read about a poor sailor named Ramsay Grey who fell from the one of the ‘yards' in 1852. The captain decided that the boat was going too fast and the sea conditions meant that a boat could not be sent to rescue him putting other lives at risk. Now that is scary.

Well the sun is over the yardarm so it must be time for the first alcoholic drink of the day. If you don’t mind I’ll skip the issue of rum the common sailor was doled out (watered down) and go for a gin and tonic instead. Cheers!
Posted by Little Nell at 12:59 18 comments: