In and Out the Dusty Bluebells

According to the 'Weather Eye' in The Times newspaper yesterday, the National Trust is predicting an early display of bluebells in Southern Britain, following the mild and dry Spring so far. The National Trust has a bluebell watch map on its site so that people can view them at their best. 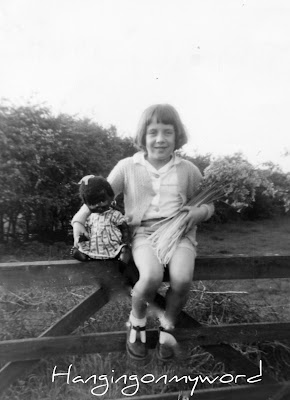 I like the description there of the bluebell flowering sweeping the nation's woodlands in a great blue wave, starting in the South West and fanning out across the UK. It made me think of happy times spent admiring bluebells in various locations in England, and gathering them as a girl. This picture was taken in 1960 when it was probably deemed ok to pick the flowers. These days we would leave them for others to enjoy. No discussion here please about the stereotypical dolly who accompanied on my bluebell quest. As I said it was 1960 and let's just say things have moved on somewhat.


I have photograph of my mother in the 1930s which was subsequently hand-coloured by my great-aunt and made into a wooden jigsaw puzzle, which you can see here. I still treasure both the picture and the jigsaw (which I played with frequently as a child myself). For my mother's recent 90th birthday I produced an anthology of her favourite pictures, prose and poems. To mark the occasion I wrote poem for the book describing that snapshot of a warm spring day so long ago. I hope I captured the mood and the many senses of the day as I imaged it. My mother liked it anyway. 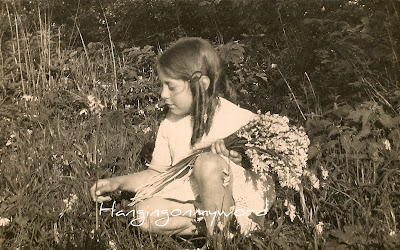 Caught by the camera
You crouch to pick a single bluebell,
crushing others unwittingly beneath your feet,
you add it to the sheaf cradled in your arm.
Just one more, and another, and another
Until the burden of this bounty
becomes almost too much.
Between finger and thumb you grasp the soft and silky stem
and pluck it from the cool earth,
The heady perfume adding to the store of sensations:
Sunday-best dress and tightly-ringleted hair,
A tendril escaping to settle on sun-browned cheeks,
Wet meadow grass on bare girlish legs,
Earthy woodland scents,
Blue haze carpeting the meadow,
A lazy cuckoo’s distant call,
And now this.
MJB

When we lived in Wiltshire we would visit the local Grovely Woods in the beautiful Wylye Valley and marvel at the carpets of blue stretching before us. 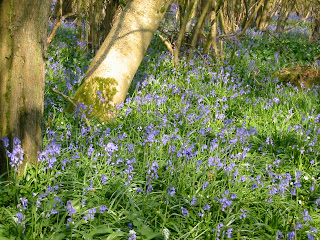 And 'In and Out the Dusty Bluebells'? It's a children's traditional street and playground song, the origins of which are stated as variously as being sung at the Hiring Fairs of old - hence the line: "Who will be my master?" - or for the young girls seeking to know who their lover would be, probably based on the same line! 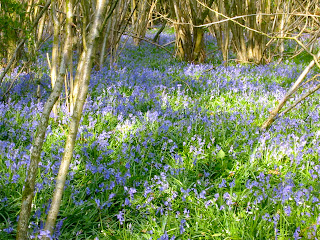