A Tale of Survival

This may look like a just a very old packet of cigarettes, but it is the subject of this week’s Sepia Saturday post. Yes, the cigarettes are still with us, but their owner sadly died some years ago. 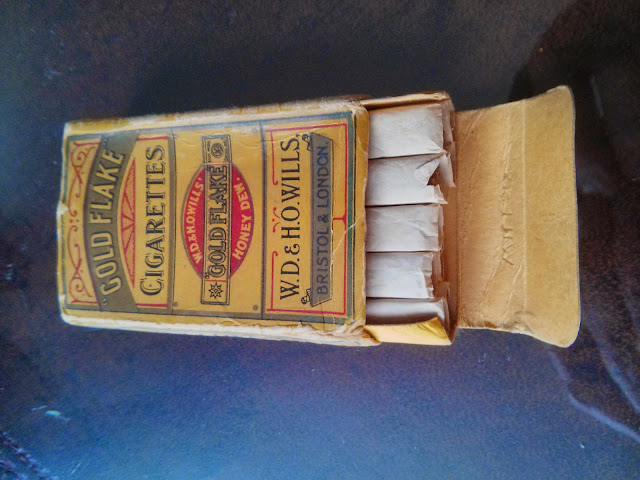 This is my sister-in-law’s father, Joe, and seventy-five years ago this month, he took part in an historic event, The Dunkirk Evacuation, also known as Operation Dynamo. It was the evacuation of around 40,000 Allied soldiers from the beaches and harbour of Dunkirk, France, between 27 May and 4 June 1940. You can read about this in countless books and on the web, and this week’s commemorative events, but Joe’s story has never been written before, so it is my honour to do so now. 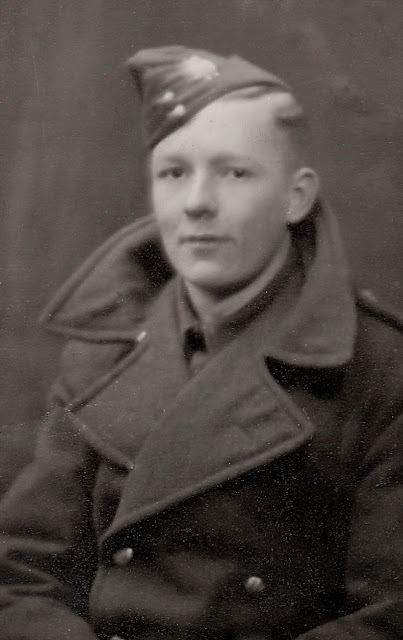 Joe signed up for four years military service with the Territorial Army on 1 May 1939 at Harborne, Birmingham, England, and on 1 September he was called up as a Driver in the Royal Army Service Corps (RASC). He was posted with the British Expeditionary Force (BEF) as an ambulance driver and landed in France on 9 January 1940. It was from there that he was to swim for his life during the Dunkirk Evacuation. Joe survived, though many didn’t, but we don’t know any more details of his rescue; perhaps it was on board one of the fifty or so ‘Little Ships’ which came to the rescue of the stranded allies. He was a very quiet man and didn’t talk much about his wartime exploits. What we do know is that the packet of cigarettes Joe was carrying at the time, also survived and that he kept them as a constant reminder of how close he came to losing his young life that day.


After Dunkirk Joe spent two and a half years stationed at various medical reception centres in Lincolnshire.

In January 1943 he was posted to PAIForce (Persian and Iran Expeditionary Force) where he drove petrol tankers. He remained in the Middle East with spells in Egypt, Palestine and Syria, until he returned to UK in March 1946.

It was exactly seventy-five years ago today that a message was sent to Lord Gort, the Commander of the BEF, to evacuate the maximum Force possible. This British Pathe News clip gives a flavour of the event; who knows? perhaps Joe is one of the soldiers in the water, or one of those later being hauled aboard ship. 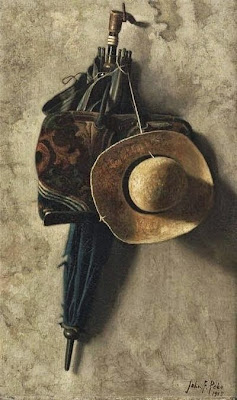 The peeling paint, and rusty hook,
The battered book,
The old straw hat,
The threadbare mat,
The furled umbrella, grey and torn,
The coat quite worn,
The shirt with holes,
The shabby soles,
The tattered bag and empty purse
The life, a curse,
Enough to make
The spirit break.
© Marilyn Brindley

Joining in with The Mag for the first time in ages, and returning also to a favourite verse form, ‘The Minute’ - sixty syllables exactly (8,4,4,4 x 3),  and also written in iambic rhythm and rhyming couplets, making it an interesting challenge. Thanks to Sandy Brownjohn’s ‘The Poet’s Craft’ once more for guiding me in the techniques, and to Tess Kincaid for the picture prompt as inspiration (1907, John Frederick Peto).

See also A Towering Talent and Trapped for other examples of my poems using The Minute.

Email ThisBlogThis!Share to TwitterShare to FacebookShare to Pinterest
Labels: Minute, poems, the mag 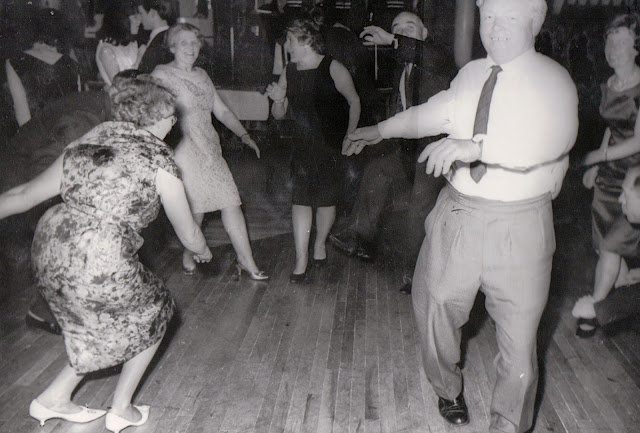 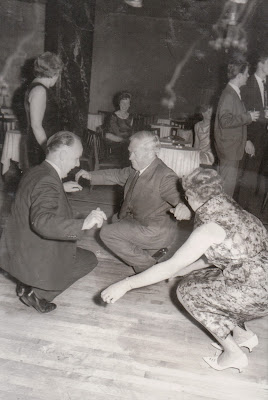 These two photos were taken in April 1965 and show my parents and friends attempting the dance craze, ‘The Twist’, which hit the headlines in 1960 with the song of the same name, performed by Chubby Checker. It remained popular for several years, enjoying several updates, including country and rap versions.

When these photos were taken, at a local dance, my parents were in their mid-forties and clearly weren’t the teenagers the original song was aimed at. Mum is in the centre of the first photo, looking very chic in her Little Black Dress, and to the right of her, Dad appears to be staggering backwards in surprise, but in reality is probably throwing himself wholeheartedly into the dance. My godparents are entering stage right, with my godfather taking the prize in that shot for achieving the position nearest the floor.

In the second photo Mum appears to be sensibly opting out of the ultimate knee-crushing bend that the dance was famed for, whilst Dad and two others go for it.

Mum and Dad were very good ballroom and modern dancers from their youth and were still dancing, whenever the opportunity arose, until a few years before Dad died in 2012.

Whilst The Twist doesn’t look very dignified, it was always a pleasure to watch their waltz and quicksteps. 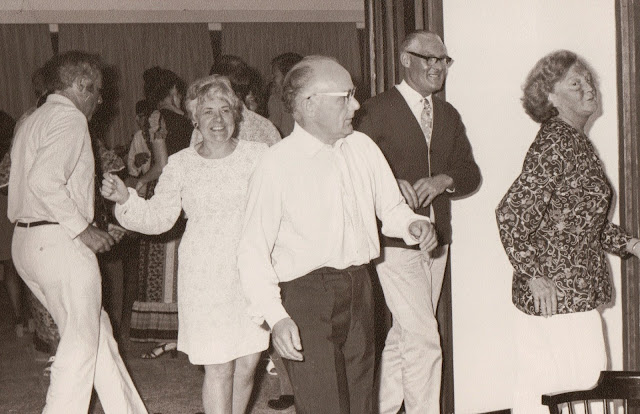 Here they are again, four years later at the Sherwood Rooms in Nottingham, at a dance held by the local Art Group, of which Dad was a founder member. At first I thought they were doing the Conga, but the chap behind isn’t joining in, and their two friends on the right appear to be executing similar moves to my parents. I believe they were ‘line dancing', although it wasn’t called that in 1969. 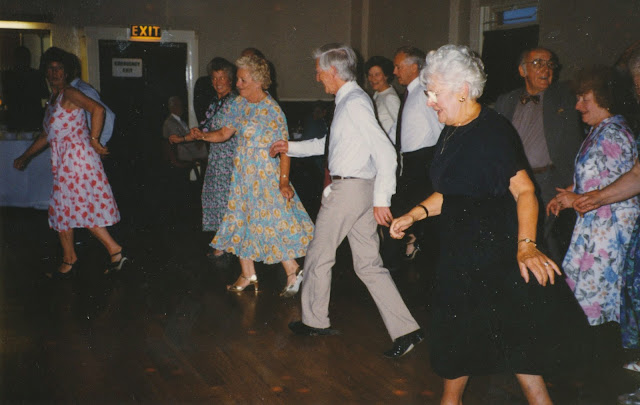 In July 1992 at their Golden Wedding celebrations, they were demonstrating it again; they also took to the floor to show that they hadn’t lost their touch in the ballroom moves either. 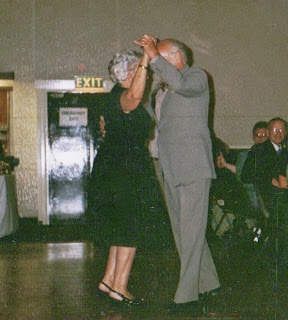 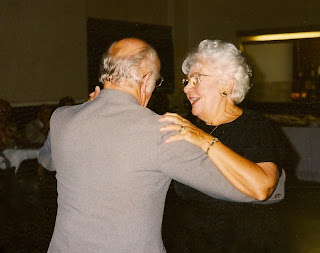 Ten years later, at their grandson’s wedding, they were surprised by the band 'playing their song’ - “Only Forever” by Bing Crosby - and dedicating it to them, as it was also their Diamond Wedding that month - and they were up on their feet again showing everybody how it was done! 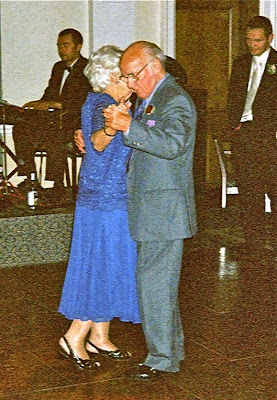 It’s not a very clear photograph unfortunately, but what is clear is my own memory of dancing with Dad on many occasions. He was a wonderful dancer, and even though I never had any lessons myself, Dad was so skilled that he was able to lead me and make it look as though I’d been doing it all my life. Somehow I just fell into the rhythm of the moves and enjoyed being twirled around.When I was young he would stand me on his toes and my feet hardly touched the floor!

They were to have yet another ten years together, celebrating their Platinum Wedding in July 2012. Dad was not very mobile by then and he died later that year. Mum misses him very much of course but she has great faith that they will one day be dancing together again.


Take your partners for the Strictly Sepia Saturday, visit other Sepians and post your own old photographs and memories for all of us to enjoy.

Email ThisBlogThis!Share to TwitterShare to FacebookShare to Pinterest
Labels: dance, sepia, The Twist 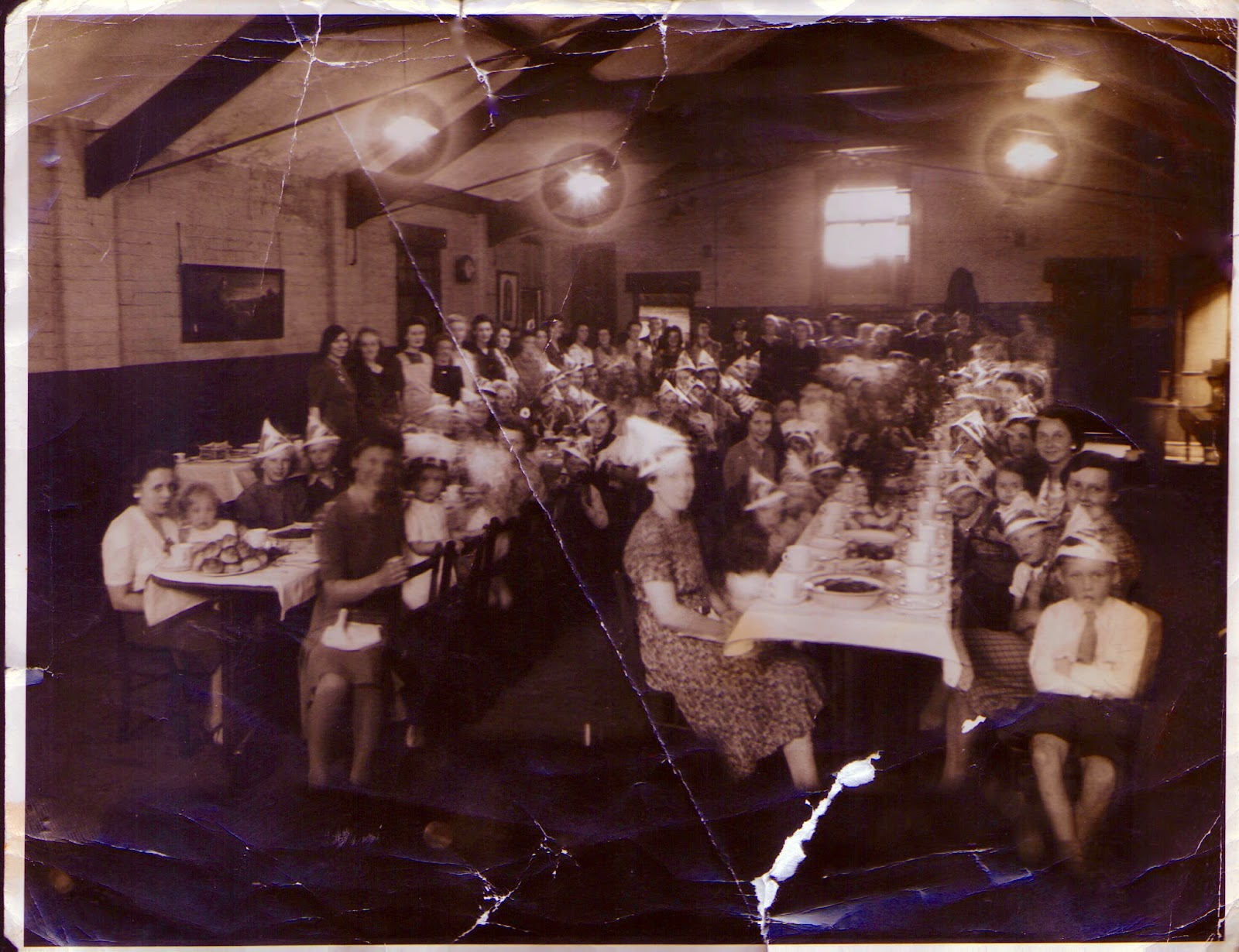 Friday 8th May is the 70th Anniversary of Victory in Europe Day or VE Day, the public holiday declared to mark the formal acceptance by the Allies of WW2 of Nazi Germany’s surrender, and thus marking the end of the War in Europe.

There will be remembrance services and street parties this weekend. Beacons will be lit and the occasion will be commemorated with events all across UK. We can look forward to some interesting radio and TV programmes, where no doubt people will be sharing their stories and pictures.

The Royal British Legion also has a wonderful VE Day webpage full of old photos and memories, just like lots of Sepia Saturdays all rolled into one! Please go and visit. In the meantime here is my own contribution to mark the occasion. On VE Day there were many parties, often hosted by the local church, and the one above is exactly that. The young lady on the far left is my mother, and seated on her knee is my big brother, aged about ten months. That huge plate of buns wasn’t all for them!

The photograph has seen better days and it will be some time before I get round to putting some work into it. This makes it the perfect match for this week’s Sepia Saturday prompt of old photos in need of care and attention.

I can’t leave my Dad out of the celebrations as he would have loved see this weekend's events. The War may have been over but it would be sometime before all the service men and women could be ‘de-mobbed’ and retun to civilian life. Here’s Dad enjoying some home leave with Mum and my brother, in a photo taken around the same time. 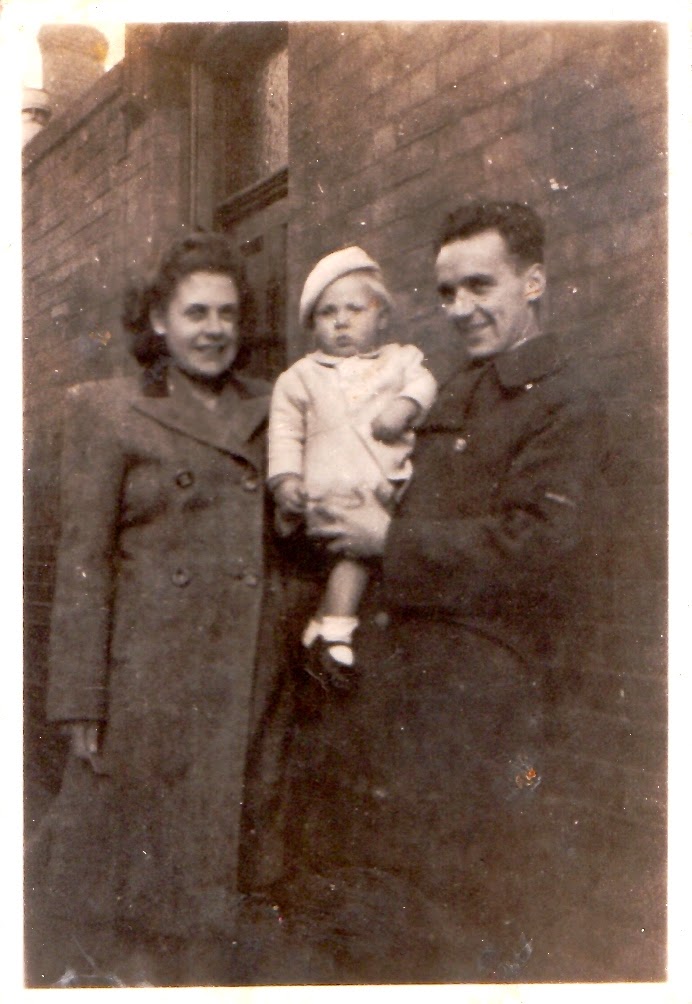 The war in Europe was over, but Winston Churchill, in his speech reminded everyone that a brief period of rejoicing could be allowed but that, “We must not forget for a moment the toil and efforts that lie ahead. Japan, with all her treachery and greed, remains unsubdued. The injury she has inflicted on Great Britain, the United States and other countries, call for justice and retribution. We must now devote all our strength and resources to the completion of our task, both at home and abroad. Advance, Britannia! Long live the cause of freedom! God save the King!”

Stirring words, and I expect Winnie allowed himself a glass of something and a celebratory cigar after that. Others toasted with cups of tea and a bun.
Posted by Little Nell at 11:34 16 comments: