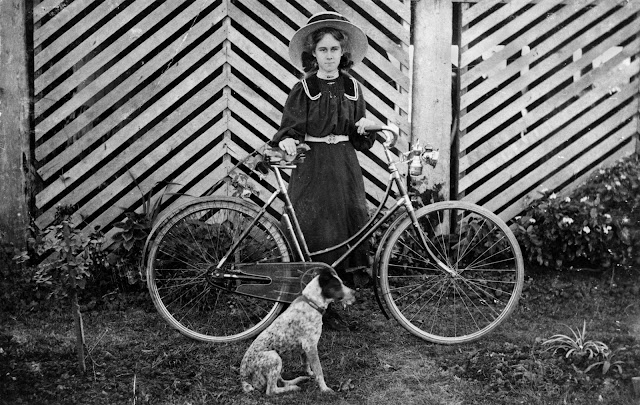 This was our prompt picture for this week’s Sepia Saturday;  it comes from the State Library of Queensland, Australia, and it features: Miss Ida Zornig of Maryborough c1911. I'm a little short of time, photographs and ideas this week; however, a quick trawl through my photograph collection yielded one or two, (although I'm sure they have been seen before). 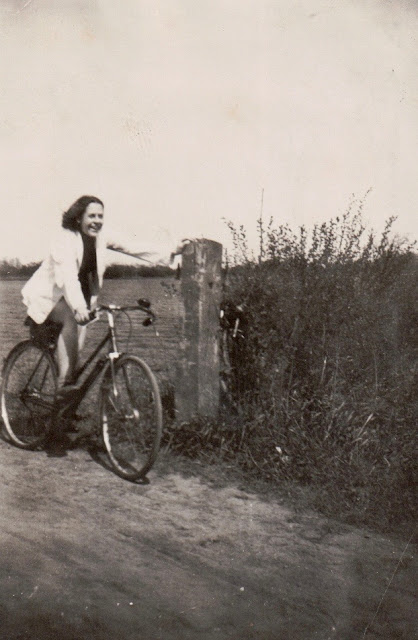 This is my Mum, aged about eighteen on her treasured bicycle. It featured in Girl on a Bicycle back in 2015, along with the one below of my daughter, learning to ride, in 1982. 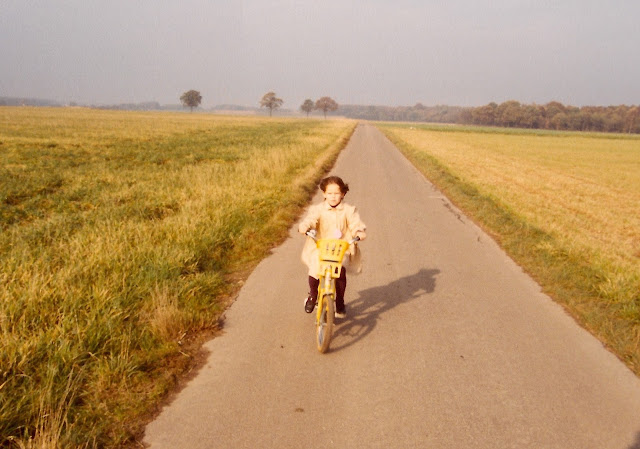 Here’s my daughter again, in 1990, with a friend’s dog, Spark, and three years ago, making friends with a young Podenco who followed us on our walk. Podencos are Canarian hunting dogs. 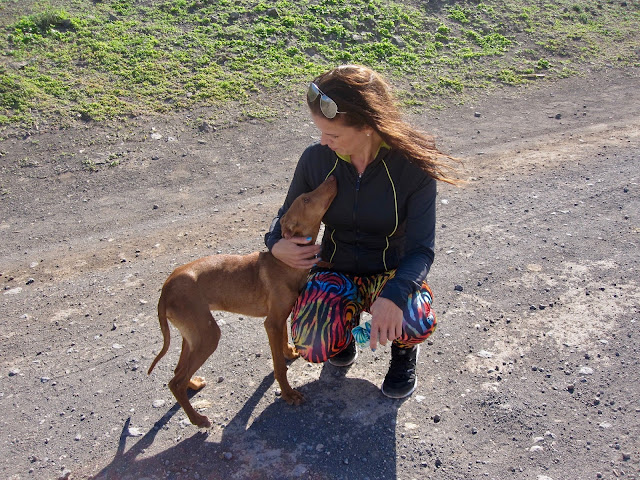 Just for fun, here’s a dog on a bicycle; well, in a basket on a bicycle, strictly speaking. I snapped this just a couple of weeks ago, so aged him using editing tools to fit in with the sepia side of things. 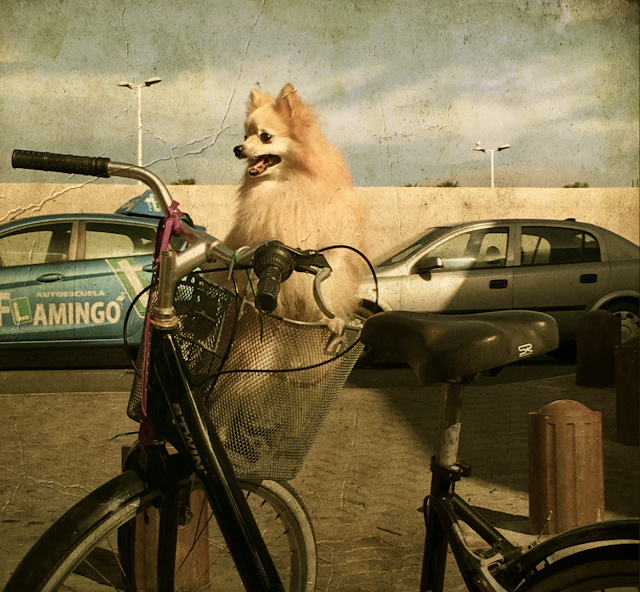 Today is the Golden Wedding Anniversary of my brother and his wife. I was a bridesmaid and I can’t believe it was fifty years ago - I bet they can’t either! We’re all grandparents now. 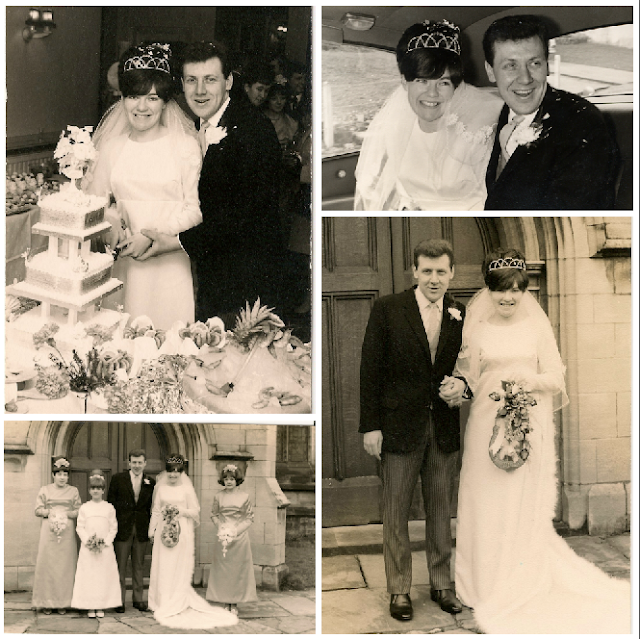 My sister-in-law’s faux-fur trimmed train was a nod to the chilly conditions of a February wedding, but fortunately the sun shone and everyone had a lovely day. I believe my sister-in-law made her own wedding cake. They were married in the same church where I would be married seven years later, and where our parents worshipped for fifty years.

Mention of the parents reminds me that our own parents had long and happy marriages and so set a good example to us all. The family has its share of divorced and separated couples, as do most, but my parents made it to their Platinum Wedding (seventy years) and my parents-in-law to their Golden Wedding, as did my grandparents, before one partner passed away. My sister-in-law, sadly lost her own mother just three years after the wedding, just as her first grandchild was being welcomed into the world.

Here are my grandparents cutting the cake (made by my sister-in-law) at their Golden Wedding, as featured in my post Golden Years, and my parents at their own Golden Wedding; cake also made by my S-i-L. 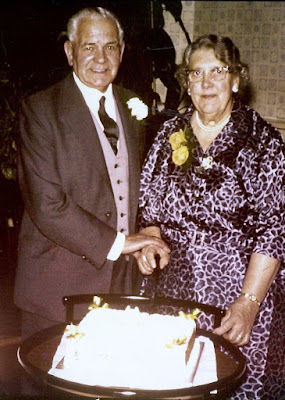 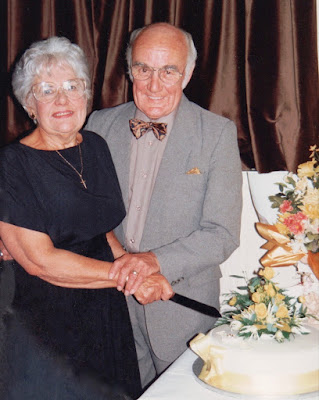 And for good measure, here we are at our Silver Wedding - guess who made the cake - and celebrating our Ruby at the largest telescope in the world on La Palma, in the Canary Islands. Just a few more years before we join the ranks of our families’ Golden Couples. 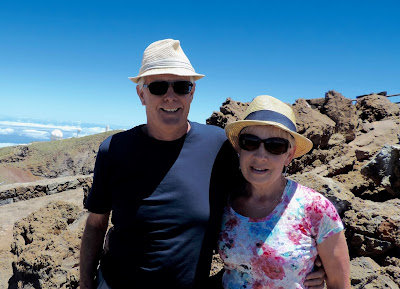 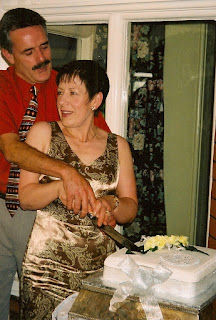 Join us this week at Sepia Saturday, where the prompt image is couples, very appropriate so close to Valentine’s Day. 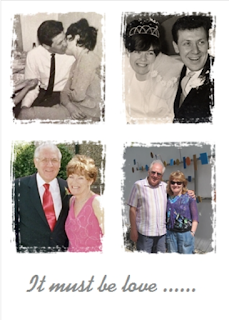 Today is the birthday of my maternal grandmother, born in 1897. Even though she died forty years ago, the date came into my head and reminded me, possibly because I’ve been tweaking the family tree recently, and delving into the history of her family.

I have written about her many times on this blog, and early readers may remember that one of my first ever posts was about her wedding, a hundred years ago this year, in Wedding Day Delay. I also covered her rôle in WW1 as a munitionette, in She Did Her Bit. In Golden Years she appeared with mygrandfather at their 50th wedding anniversaary. I’m not going to reprise all the posts here, nor repeat my many memories of her; instead here is a collage taken from the family albums. The first, taken in 1916, is the earliest photo we have of her, and the last, taken by my father, is when she had moved in to live with my parents and was quite frail. She died in 1977. 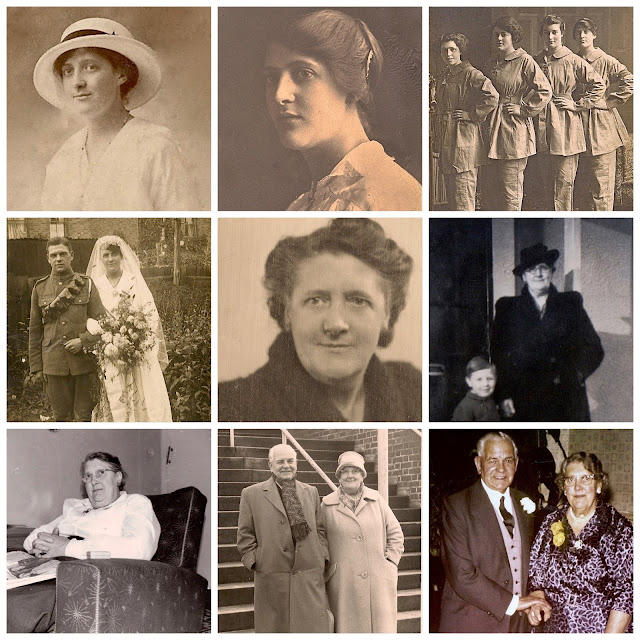 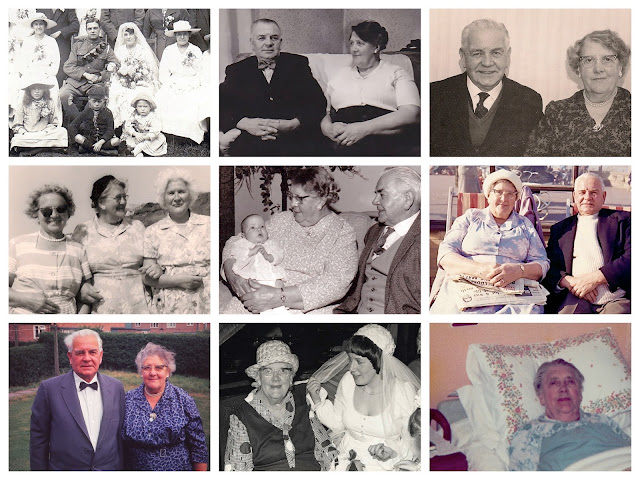 This picture, shows her very much as I remember her in her later years. My grandfather died in 1971, and for a while she managed to stay in her own home, with some help. 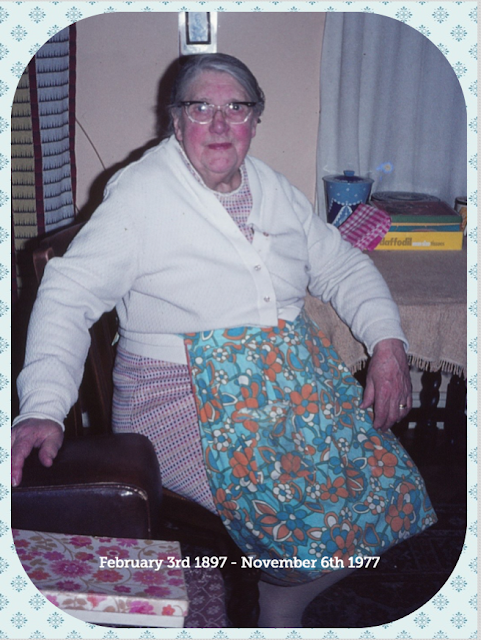 Join others at Sepia Saturday this week, to see more old photographs and memories.
Posted by Little Nell at 00:10 8 comments: