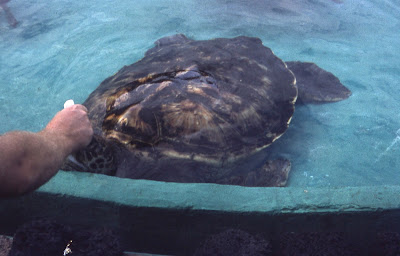 No I haven't made a mistake with the title of this post and all will be revealed in due course.

Unbelievably, nearly forty years separate the above photograph and the three below. The turtle above was pictured by my husband in a shopping mall  in Waikiki Beach, Hawaii in 1974. It must have seemed a novelty to him as I can't think of any shopping centres in UK where one could stroke giant turtles at the time.

My daughter loves the sea, fish and aquatic animals, and in 2011 we combined a short trip back to UK with a visit to Oceanarium, a sea front aquarium in Bournemouth, Dorset, where we were staying. There was a section called Turtle Beach and we were fascinated to watch the turtles at such close quarters. 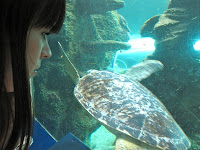 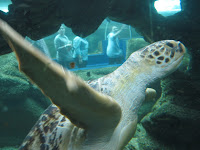 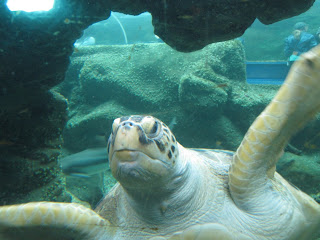 This week's Sepia Saturday has a tortoise with a soldier in the old photo prompt, and Alan invited us to choose a theme from any item in the picture, generously allowing turtles in place of tortoises. Old, the picture at the top may be but it is not sepia; there is, however, a sepia connection. Did you know that reptiles, especially tortoises and turtles, enjoy cuttlefish bones? 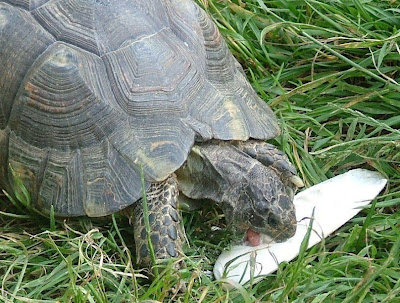 Co-incidentally I picked up a couple of bones on the beach here in Lanzarote on Monday. I don't have a tortoise, turtle or even a budgie (for they too have a liking for the cuttlebone, as a source of calcium) but had another, more crafty, use in mind, which may be revealed on my other blog in due course. The tortoise above seems to be enjoying his treat, and there is even a YouTube clip of a tortoise munching happily away, here.

And the sepia connection I can reveal at last is this; cuttlefish are marine animals of the order Sepiida. They range in size from 15 to 25 cms (5.9 to 9.9 inches), with the largest size, Sepia apama reaching 50 cms (20 inches) in length and over 10.5 kg(23 lbs) in weight. The Graeco-Roman world valued it as a source of the unique brown pigment the creature released from its syphon when alarmed. The word for it in both Greek and Latin, sepia, is now used to refer to a brown pigment in English, (but that last bit we all knew of course).

If you want to see what other contributors have made of the unusual prompt picture above, hurry on over to Sepia Saturday and don't be caught napping. 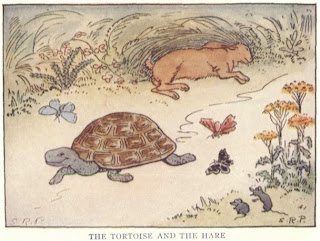