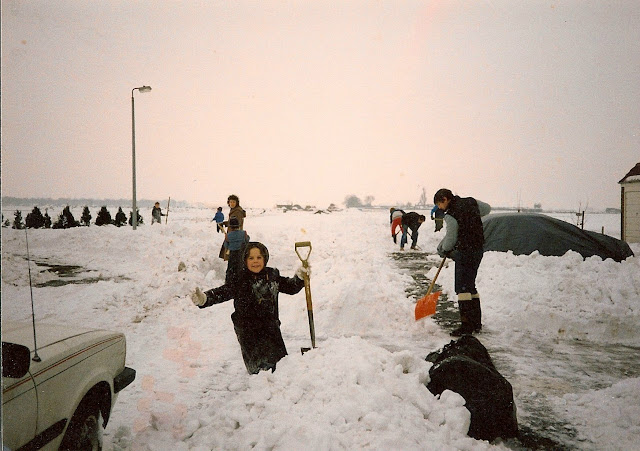 Alan has given us a snow picture as our prompt for this week's Sepia Saturday theme.

The prompt picture has someone, underneath a lamp-post, digging in the snow with a spade or shovel and this is the nearest match I could get. It's my daughter with the spade, and my son is in the background, under the lamp -post, and my friend is wearing a long coat, so I score three points! The date I have written on the back is January 11.1987. That day the BBC weatherman, John Kettley said: "The only bright thing on this forecast is my tie!" He rightly predicted freezing temperatures and blizzards all week, but this was an underestimation. During the day temperatures kept on falling as snow showers became more intense. I was living in our house in Coningsby, Lincolnshire, where my husband was stationed with the RAF. Unfortunately for me he was on the other side of the world in the in the sunshine of the Falkland Islands. Our friends and neighbours came to dig me out as I was marooned with two children, and rapidly going down with a severe case of tonsillitis. It was a bleak time I remember. The wind was blowing straight off the airfield, seen in the background, and we were running out of fuel to heat the house. The village was cut off and there were no deliveries; everyone was borrowing from each other and huddling together.

According to The Weather Outlook site, the following day was probably one of the most remarkable days of the 20th Century, as temperatures stayed below -5c throughout England, and below -8c in some places in the Home Counties. The weather log for January 1987 describes the 12th-14th as the coldest spell of weather in southern England since January 1740. Over the next few days the U.K. was swept by blizzards and freezing temperatures. It was widely accepted as the most severe spell of weather in southern England since The Little Ice Age, and it ocurred in an otherwise average winter. 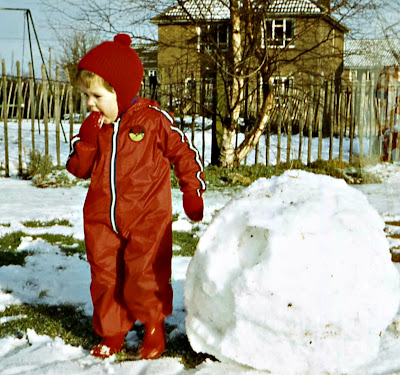 Digging for more snow pictures I found this one of my daughter aged about fifteen months in the garden of our married quarters at RAF Wittering near Peterborough. This would be the Winter of 1979 and she was getting her first taste of snow, quite literally by the look of it. 1979 was the most severe winter of the 20th Century. It wasn't as cold as 1963, nor as snowy as 1947 but was memorable because much of UK experienced long cold spells with heavy snowfall. It was also the most severe winter since colour photography became widespread so there are many archive colour photos to record it. The entire winter, the third coldest overall of the 20th century was bitterly cold and miserable, particularly in January and February. The Weather Outlook site is probably correct in summising that it compounded the industrial unrest in what became known as 'The Winter of Discontent'. 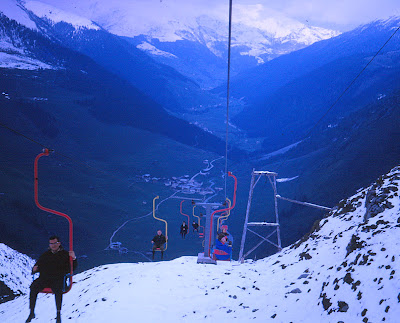 The above picture of me in the Austrian Tyrol, only came to light recently when we were copying 35m slides from my parents' boxes. Of course I'd seen it before but had forgotten it until now. I'm not too good with heights so I was probably looking back to Dad for reassurance. We'd gone on a holiday to Mayrhofen in 1966 taking advantage of a cheap holiday offer. We were a little unsure as the price seemed to good to be true, but in fact it turned out to a lovely, happy holiday. The scenery was spectacular of course and we enjoyed staying in a comfortable guesthouse and visiting the local bierkeller for entertainment and music. 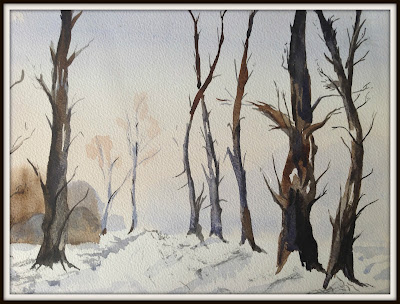 And for something a little different, here's one of my favourite snow pictures, painted by my Dad. There were several to choose from, and treescapes were his forté, but this one seems to sum up the simple pleasure of a brisk walk through the woodlands near where he lived. A cold winter afternoon with the sun casting long shadows of the tall trees in the snow. There would be the occasional passerby, a couple with a child, someone walking his dog, and all would exchange a greeting as they hurried on, buttoned up against the cold. The birds would already be roosting for the night and it would be time to head for home and warmth. I've walked that walk with my parents and family many times and this picture is another reminder of those happy times.

To see how other Sepians (for that is how we are now known) have interpreted the prompt, you may need to don your snowshoes as you set off for the round of wonderful pictures, memories and anecdotes that is Sepia Saturday. We also have a Facebook page, where we have nearly as much fun.
Posted by Little Nell at 09:05