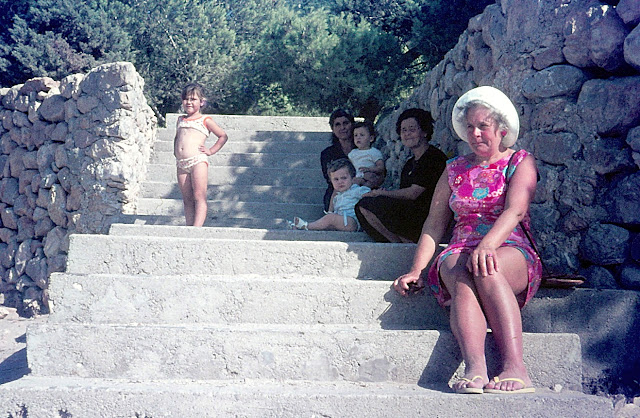 Our photo prompt for this week's Sepia Saturday challenge is a family group who remain unidentified. Amongst my own albums there are no pictures where at least one person isn't known by name, so I have settled for images where strangers have either unintentionally entered the frame, or, as in the case above, been invited to be part of the scene.

In this picture, scanned from a 35mm slide from my Dad's collection, Mum joins an unknown family group, seated in the shade of the steps. The picture of the 'step-family' was taken on the Spanish island of Ibiza in the Balearics. It was my last summer holiday holiday with my parents as I was due to begin my teacher training at college in the September of 1970. I therefore naturally have very fond memories of the trip. It was August and almost unbearably hot, but Mum looks cool enough perched on the steps wearing her 'flip-flops' and sunhat, with earrings chosen to match her dress. I've mentioned before that Dad's artistic eye meant that he sometimes posed the family in interesting settings or at unusual angles, often not looking directly into the camera, as above.

On their trips abroad in the 70s, 80s and 90s Dad would be on the look out for 'the little old lady' as she became known to the family. In Mediterranean countries these women were usually dressed head-to-toe in black and and probably weren't very old at all. I haven't got access to any of those yet, so I've settled for the photo above. I expect Dad thought they made a charming group, but would have hesitated to take a picture of them on their own, so placed Mum in the foreground, thus capturing both his lovely wife and a little local colour.

It's difficult to tell the ages of the two women in black, although I suspect one is the mother and the other the grandmother. Times have changed in the forty odd years since this scene was captured and these days most Spanish women dress in modern styles, with very few wearing black. My mother in her short, vivid pink dress must have been something of a curiosity to this family. I wonder what happened to them. In the intervening years the children would have gone to school, begun work, married and started their own families. It's strange to think that they are very likely parents and could even be grandparents themselves now. 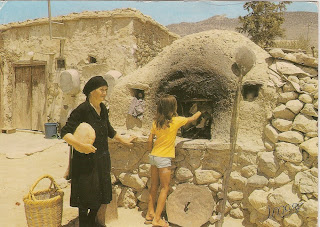 'Little old Lady spotting' for Dad's collection became a family joke and in 1995 when I was in Cyprus, visiting British Army schools as a headteacher, I saw this postcard and couldn't resist sending it to my parents.


For more unknown family groups, or even Little Old Ladies, head over to Sepia Saturday to see what other contributors made of the prompt. Regular Sepians are also invited to join our Facebook group, where age is no barrier, and you can dress in black or vivid pink as the mood takes you, as no-one will know.