The Box of Delights

'The Box of Delights' by John Masefield is a 1935 children's classic. It has been reprinted many times with different illustrations and its 1980 televised version became a TV cult classic in its own right. John Masefield was an English Poet Laureate, and although the style is very much of the 1930s, it is also beautifully written prose, with elements of poetry. 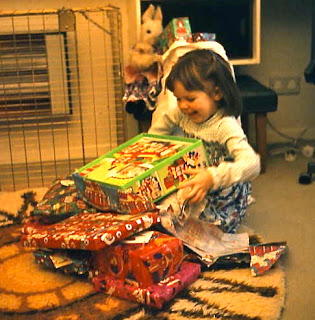 Here is my daughter in Christmas 1981 opening her very own 'box of delights'. The picture is a family favourite as it encapsulates the sheer joy of a four year old girl opening her presents on Christmas morning. There were more delightful boxes to be opened that day but none seemed to match the pleasure that this box of Lego Fabuland could bring. This was the hospital set with its buildings and cartoon animal characters. My daughter spent many happy hours playing with it and eventually it was passed on to my son's twins. 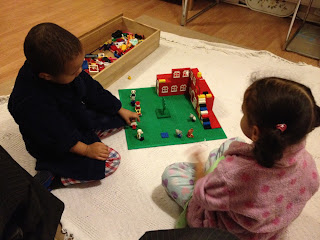 And here they are with another 'box of delights'. 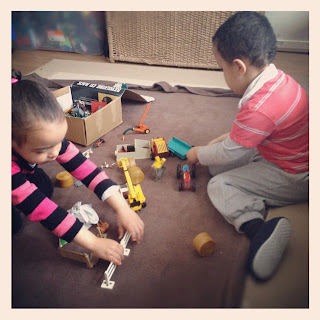 This box is obviously not the original container of the farm models, which were collected over a number of years on a weekly basis with pocket money. How do I know this? Yes, you've guessed it, these were my very own delights, the Britains Farm set from the 1960s. They were played with by me, added to in the seventies by my own children, and now give pleasure to my grandchildren; what could be more delightful than that?

Our photo prompt for this week's Sepia Saturday challenge was a worker in a cardboard box factory.

As a student I worked in the Boots Company printing works in Nottingham in the early 1970s. Unfortunately I have no images, nor could I find any on the web. I do have my memories of some of the jobs we did. As well as printing cardboard packages, we produced flyers, posters, patient information leaflets to insert in drug packets, labels for the many Boots products and the famous Boots Diaries. The latter were a favourite amongst the students as we often worked together as a team on the production line. One of the jobs was simply to insert the little pencil in the spine; do diaries come with pencils these days? I don't know. We would often be so busy chatting that it wasn't unknown to send a whole set down the conveyor belt without the pencils! When we left at the end of the six weeks a parcel of the various diaries would be given to us, the favourite being the giant Scribbling Diary'.

I only worked in there one year; the other summer holidays I was employed at the Boots vast factory plant at Beeston, in the building called 'Pastes'. The pastes were filled in their individual containers, checked and packaged in boxes all on one conveyor belt. It was one of the most mindlessly boring and repetitive jobs I have ever done. I remember 'Horses' Cough Paste' and 'Piglet Anaemia Paste', but also 'Udsal Cream' for protecting cows' udders from cracks and mastitis. It contained lanolin and my hands had never been so soft!

For more delights unboxed clock in at Sepia Saturday where Alan is the overseer and others have been busy on their own production lines. You may like to join us in our Facebook Group, where we also have a productive and delightful time.