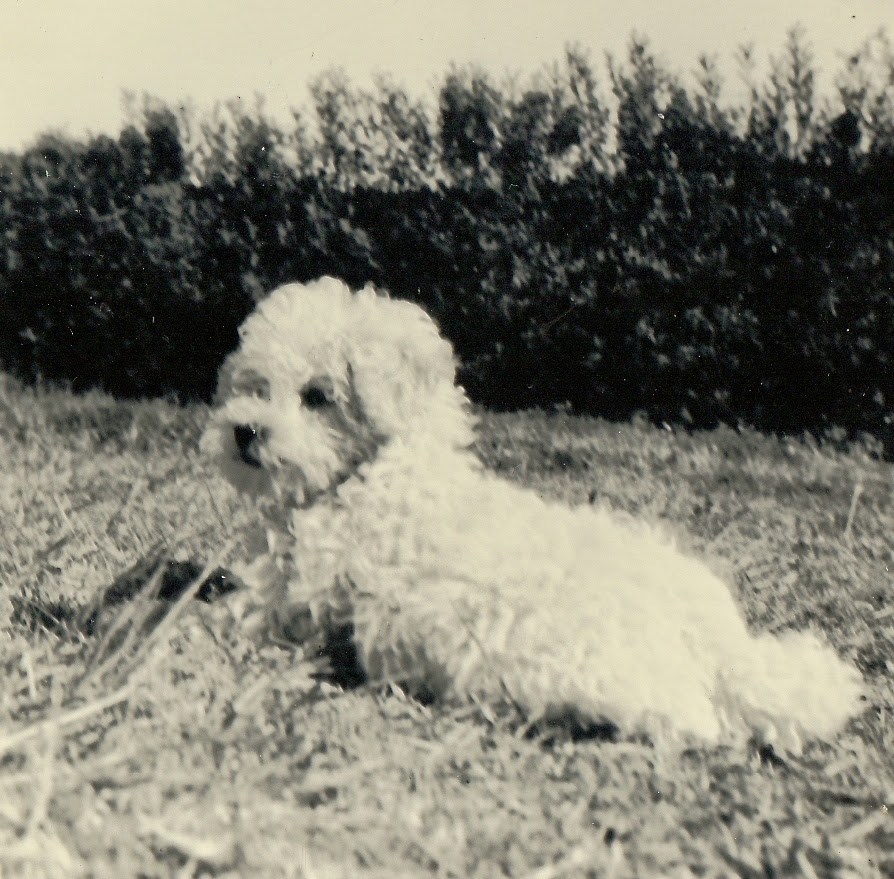 This is my puppy, Kim, bought for me when was eleven.  He is the only dog I have ever owned and of course I loved him. He was a Miniature Apricot Poodle and he lived for fourteen years.

Because he was around so long there are many photographs of him and has often appeared in my sepia posts, such as 'A Bag of Bones’.

One of my best ever posts was ‘To Say Nothing of the Dog’ in which and other family dogs appeared. I don’t think I can top that one as far as the dogs are concerned; however, this week’s Sepia Saturday picture prompt is a dog, being held in the arms and being hugged. In 'Window of Opportunity’ you can see Kim in just such a pose, where he is being held in my Dad’s arms. 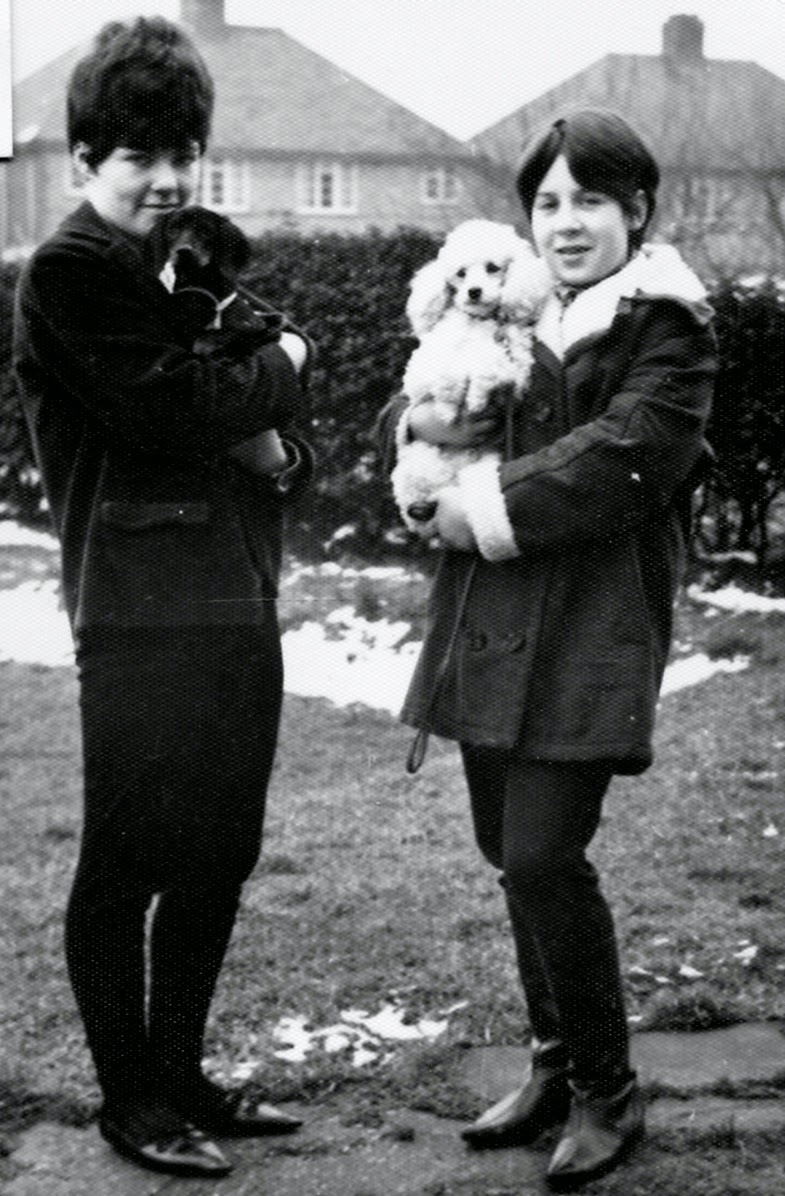 For a picture that fits the bill, and which has never appeared before here to my knowledge, here’s two for the price of one. This is my future sister-in-law (though we didn’t know it then), with her dachshund, Heidi, and of course that’s me, and Kim, a few years past puppyhood, but with many years left in him.

Head over to Sepia Saturday 270 for more pictures of huggable dogs and possibly huggable stewardesses; we never know what the prompt will suggest to fellow Sepians but it’s guaranteed to have lots of old pictures and perhaps some shaggy dog stories too.

I first met this talented young man last year, whilst visiting London’s Docklands Museum at Canary Wharf, where this striking portrait of him immediately grabbed my attention. The museum is housed in an historic warehouse and contains objects, personal stories, artwork and music that have left a strong mark on the capital. It is the music which provides me with the perfect link to this week’s Sepia Saturday. 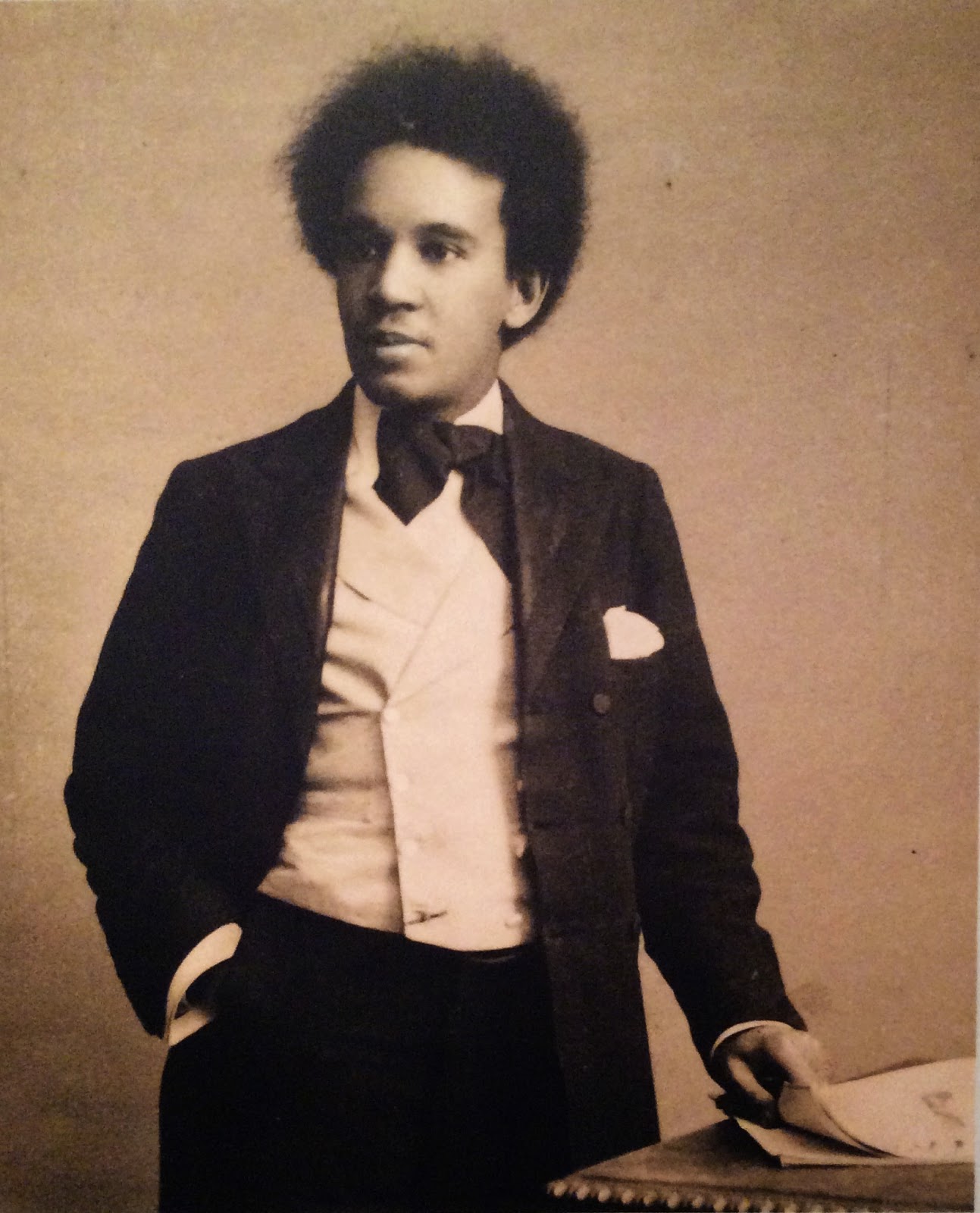 The sheet music pictured here was in the same glass display cabinet as the picture of the young man, and the one on the left in particular was to make his name. He was Samuel Coleridge-Taylor (1875-1912), a talented  composer and conductor who flourished in late Victorian London. Sadly he was to die far too early, at the age of thirty seven, of pneumonia, possibly brought about by overwork as he struggled to make ends meet for his family.  Of mixed race, with a black doctor father and an English mother, he was brought up in the London suburb of Croydon and began taking violin lessons at a very early age, before later studying at the Royal College of Music. He went on to become one of the country’s most popular composers of choral music well into the early Edwardian age. 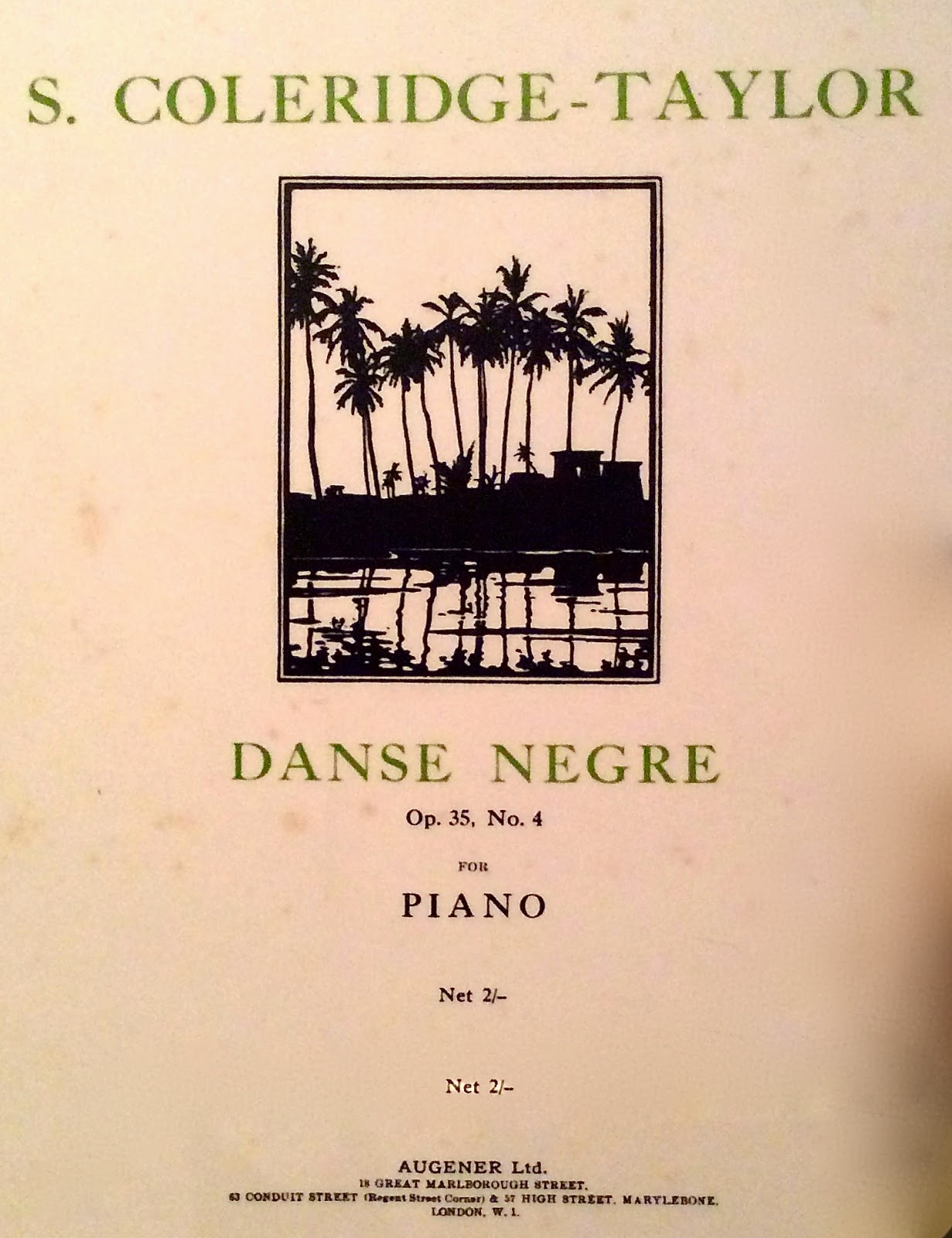 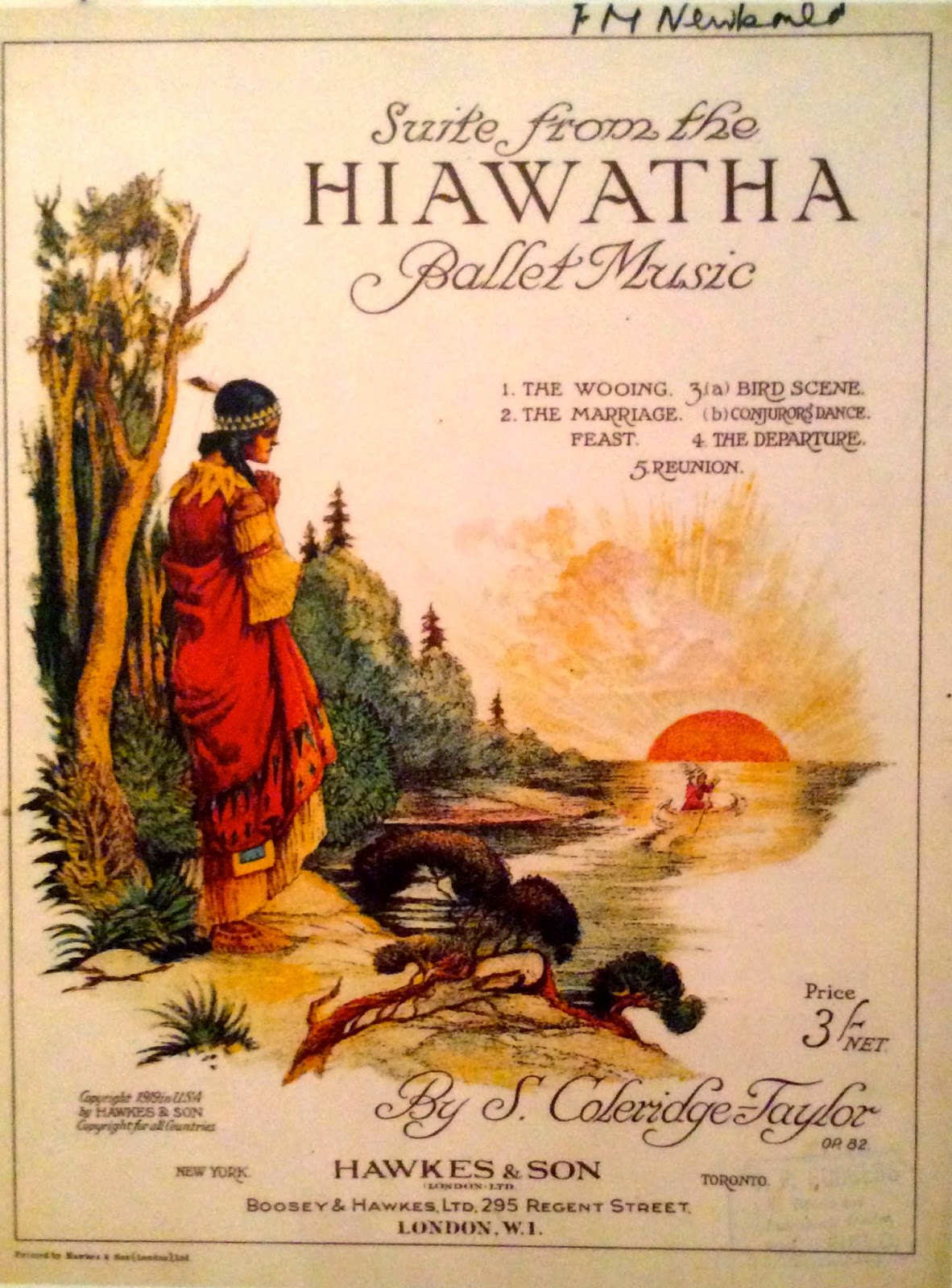 Black Mahler, the website of Charles Elford, Samuel’s biographer explains: “ Coleridge-Taylor’s epic choral trilogy 'Song of Hiawatha' makes this funny, generous and modest young man a worldwide sensation overnight.”  He undertook several tours of America where he was hailed a cultural hero by African Americans, but “Coleridge-Taylor struggles against financial ruin, personal tragedy and seismic obstacles throughout his short life.” There’s a link to a radio interview on the Black Mahler web page, given by his biographer, which furnishes us with more details. And here is a link to the BBC Music page where you can hear clips of his music and a brief audio-portrait of the composer,  and where an explanation is given for his impoverishment. He sold the rights to his cantata ‘Hiawatha’s Wedding Feast, for just fifteen guineas. It became a huge success but Samuel was to see none of the royalties. When he died King George V made an allowance of £100 a year to Samuel’s widow and two young children, one of whom he had named Hiawatha, so moved had he been by Longfellow’s poem. A memorial concert also raised a tidy sum of £1,440 for the family, but the scandal of the family receiving no benefits from the commercial success of 'Hiawatha’s Wedding Feast’ was the impetus for the formation of the Performing Rights Society. The guildhall School of Music arranged bursaries for his children, who both went on to be professional musicians themselves.

The British Library Online Gallery has more information and pictures, including his gravestone, with a memorial written by his friend, the poet Alfred Noyes, and at the base of the plinth a few lines of his music are engraved, along with the words: Thus departed Hiawatha, Hiawatha the Beloved.