Eye in the Sky


The Eye in the Sky happens to be one of my all-time favourite tracks on one of my favourite albums, by the Alan Parsons Project. It’s a 1980s classic, and hearing it recently meant it popped into my head when I saw this photo below. A recently issued movie of the same name is apparently about drones and terrorism - something far from minds of the writers of the song, who I think were writing about love and betrayal.  Please skip any ad or trailer that may appear before this video, and hang on in for the ride, it’s worth it! 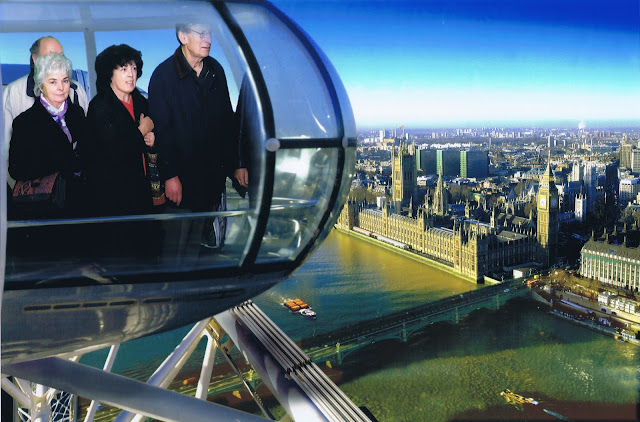 This picture shows my husband’s late sister and brother-in-law, in a capsule of the London Eye, enjoying the panoramic views of London. We know the date exactly as Gill also stored the entrance ticket with her photo; the ticket clearly shows 4th December 2000 and a time of 1.30 in the afternoon. It looks as though it was bright and clear and they would have been able to see for miles- whether they were able to read anyone’s mind -as per the lyrics - I somehow doubt. 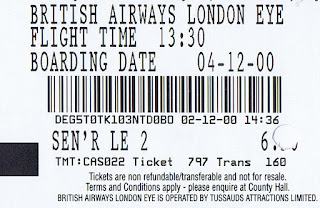 You can read about the London Eye’s history by following the link to the Wikipedia article.


Despite the difficulties it seems to have encountered over the years, it appears to be still going strong, and here is my daughter’s snap taken this week on her iPhone, from Charing Cross Station, whilst travelling around London. 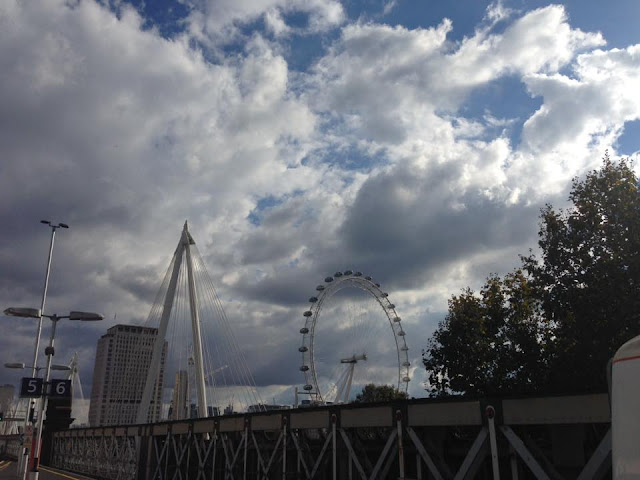 Meanwhile, Sepia Saturday this month has us travelling in all directions, even up in the sky.

My late father was a sales rep (aka commercial traveller) for most of his life.  Each company he worked for provided him with a vehicle which doubled as a family car. This was very useful, because he would never have afforded such a luxury on his salary. The council estate where I was brought up had virtually no cars parked outside, and of course there were no garages, so Dad’s car stood out somewhat. I remember he had to park it a couple of streets away in a private garage. Having a car meant a bit more freedom and comfort for our family holidays, usually taken in a caravan somwhere on the East Coast. On one occasion we had a holiday in Scotland, and another in Wales. I don’t remember much about the journeys, except feeling travel sick and wanting them to be over as quickly as possible; cars weren’t built for comfort in those days! In my parents’ photo albums are a a few photos of these cars, as well as some slides of varying quality.

Join us for Sepia Saturday, which this month is all about coming from, getting there, and travel of all kinds.