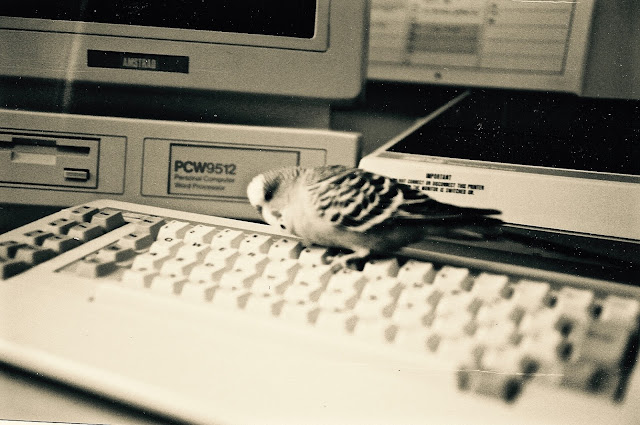 "The infinite monkey theorem states that a monkey hitting keys at random on a typewriter keyboard for an infinite amount of time will almost surely type a given text, such as the complete works of William Shakespeare.” (Wikipedia)

Here’s our budgie, Pippin, putting this to the test (for monkey, read, budgie) at Christmas 1993. It’s not a typewriter of course, because we had moved on to computers by then. The computer itself almost dates the picture, as it’s an Amstrad PC and a rather clunky keyboard, typical of the times. I’ve sepiarised them for fun and because the picture quality is so poor. 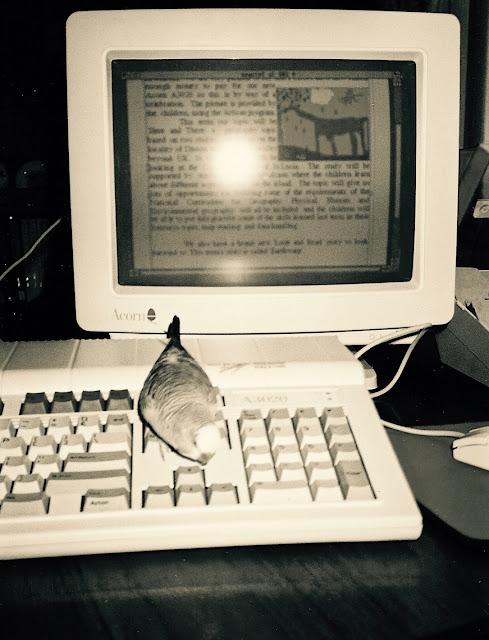 Pippin also helped me out when, during my first Headship, I brought a school computer home to prepare some work for the children (no laptops then).  That’s not the result of his efforts on the screen however. 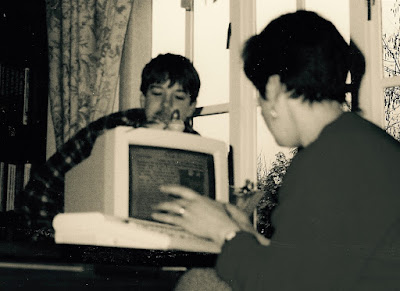 To distract him my son placed one of Pippin’s toys on top of the computer, so that I could get on with some lesson preparation in peace.

Pippin was very inquisitive and would ‘help’ with any activity the family were involved in. ‘Pippin Helping’ became  a family catch phrase. He would ‘help' with jigsaws, by turning over all the pieces back to the blank side. He would ‘help' by grabbing my sewing needle and trying to pull the thread through. 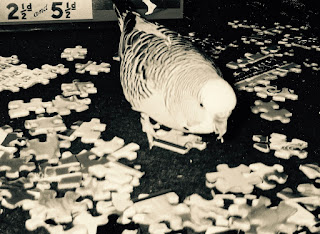 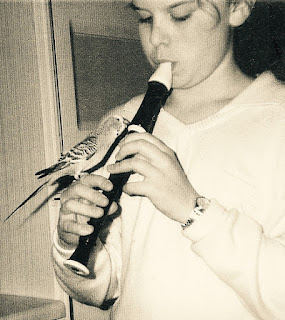 He would ‘help’ my daughter by tidying her hair ribbons and ensuring she hit the right notes in her recorder playing. 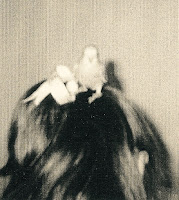 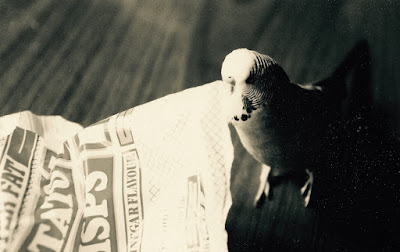 He liked to check that the salad was thoroughly washed and that there was no leftovers in the cereal bowls. Any empty crisp packets were ‘tidied up’ by being marched to the corner of the table and dropped over the edge. Pippin also liked to groom anybody who was willing to sit still long enough. 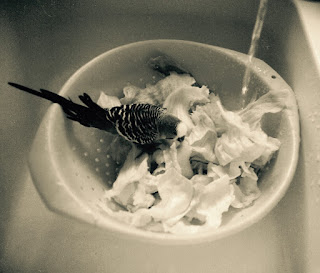 What he wasn’t very good at was helping with any writing. He never wrote a report or assisted with homework. No matter how many keyboards he was allowed to run along, he never produced anything worthy of a mention.

He certainly inspired us all to write our own memories when he died in August 2000. He’d been part of the family for ten years and his antics were a source of joy to us all.

Fly over to this week’s Sepia Saturday today and see what this old image of a typewriter has inspired others to post.

Erected for Counsel and Welcome 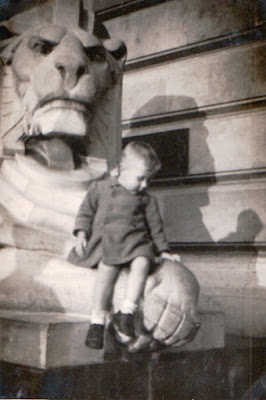 This is my brother in 1946, perched on the paws of a rather disdainful stone lion. This isn’t just any old lion,  it’s the famous  Left Lion,  well know rendezvous in front of Nottingham's magnificent Council House in the Market Square. There is also a Right Lion, and the pair are know locally these days as Leo and Oscar. They were designed by Joseph Else, principal of the Nottingham School of Art.


There would have been an added significance at the time of this photo, as my grandfather  had worked as one of the team of builders who constructed the Council House almost twenty years earlier. 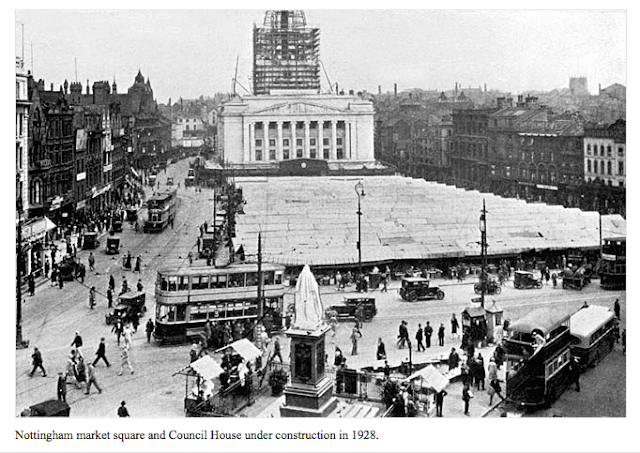 The above picture is taken from Arthur Mee’s 1938 ‘The King’s England: Nottinghamshire’, courtesy of the excellent ‘Notts History’ website * and where we can read a very detailed description of the new building and its significance for the ‘Queen of the Midlands’ as Nottingham was known. Mee uses the image to show how the old Market Square looked during the Council House construction; he then extols the virtues of the new Nottingham, which has tidied itself up, got rid of its slums and ‘shabby’ market and built many new houses, schools, hospitals, boulevards, parks and playing fields, making itself “one of the most wonderfully equipped cities in the kingdom." 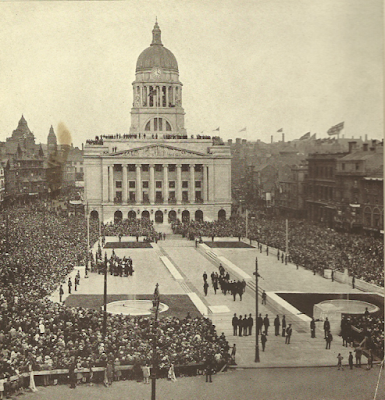 The Council House official opening by the Prince of Wales, on 22nd May 1929** attracted large crowds. I wonder if my grandfather took his family along; perhaps they are somewhere in this picture. The market had been moved to an indoor venue and the old market square was laid out with lawns, flowers and marble walks. Perhaps that’s when the local nickname change to ‘Slab Square’.

Arthur Mee wrote in 1938 that: "The dome looks down from its 200 feet height to the floor of a spacious arcade of shops and offices, approached by great arches from the streets. Round the bottom of the dome we read that the Corporation of  Nottingham erected this building for Counsel and Welcome, and to show Merchandise and Crafts.”

This is how it looked in August 1994 in a picture taken by my father. 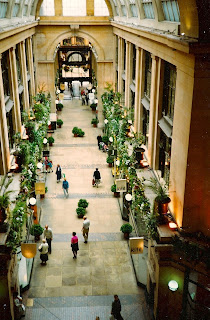 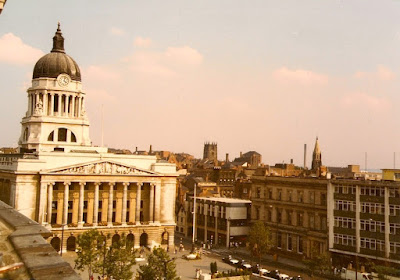 Over the years the square has changed several times. The picture above was taken sometime in the late 70s, early 80s, and where the iconic black and white taxis are lined up on the far side of the square, now runs part of the city’s vast new tramway.

Visiting in December 2012, for my father’s funeral, I took this picture. The Christmas Market was on and, for some reason, this is the only image I took; I found it curiously uplifting. 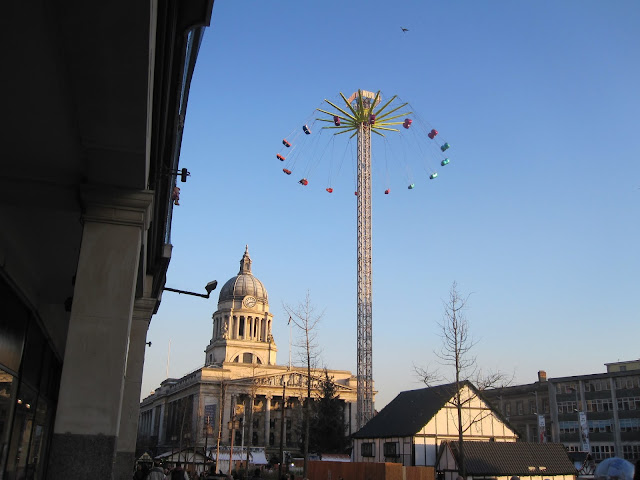 When I was there last month I took this picture, showing the new fountain/water feature. The flowerbeds and walkways are gone, but in their place is a large space which serves the city as a venue for celebrations, Christmas Markets, and other events. Sometimes it becomes an ice rink and sometimes it is filled with sand and becomes ‘Nottingham by the Sea’. 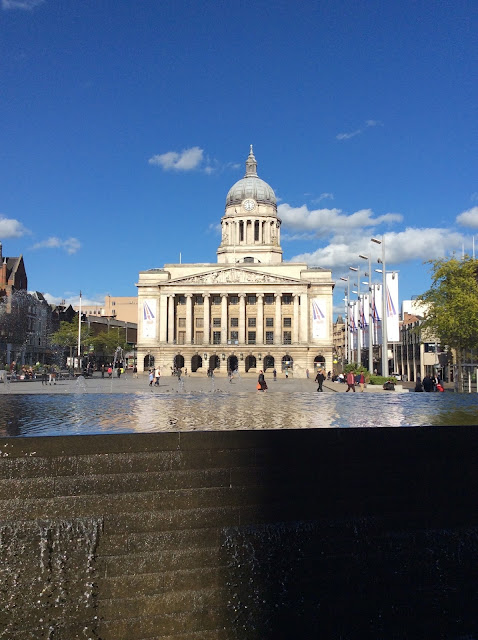 The Council House remains unchanged, and Leo is still there too. 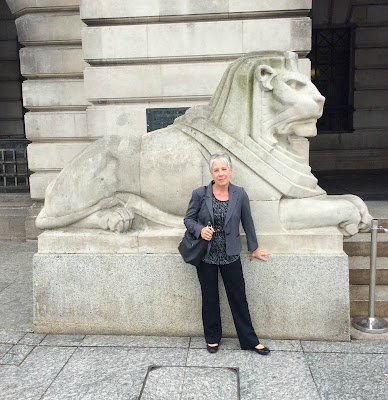 One of the themes suggested by this week’s Sepia Saturday prompt was construction work, tunnels or significant dates. Step back in time and see what other Sepians have found in their old photo albums.

*Andy Nicholson holds the copyright and in 2012 graciously granted me permission to use his pictures. Do go and have a look at his labour of love at nottshistory.org. The Arthur Mee volume was only added this year and is full of interesting information.