We are such stuff, as dreams are made on; and our little life is rounded with a sleep. 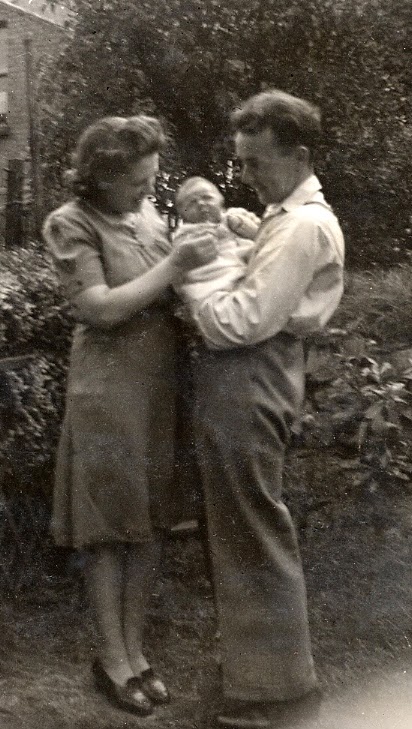 Here are my parents in 1944 proudly showing off their first baby, my big brother. Mum and Dad married in 1942 and sadly Mum’s first pregnancy ended in miscarriage, so my brother’s birth was a cause for great celebration.  They were young; Mum was 23 and Dad would also be 23 a few days after my brother’s birth. They always wanted a second baby but there was quite a gap before they found themselves expecting twins, due to be born in the Spring of 1950. They were probably both delighted and surprised; there were no other twins in the family that we knew of.

Everything was ready; layettes knitted by my Mum and the female relatives, cots and twin pram, and no doubt my brother was primed to expect the new babies too. Mum went into labour two months early, and the babies were born on February14th 1950, St.Valentine’s Day. A boy and a girl, ‘the ‘Pigeon Pair’. The names were already picked out; Paul and Rosemary, but according to my Mum it was the nurses who named the little boy ‘Valentine’ and so he was. Sadly the babies, being so premature, were not very strong, and both died after a few days. My mother never even got to hold her babies and my father was only afforded a glimpse of them in incubators in the premature baby unit.


Today is St. Valentine’s Day and would have been the twins’ 65th birthday. There was no memorial, no grave, no picture, sepia or otherwise, for my parents to remember them by, and yet they were living, breathing souls, who were fleetingly present on this earth. In the 1950s there was far less understanding of the grief and sense of loss felt by parents who had lost their newborns or suffered stillbirths. The attitude was very much one of getting on with life; in that respect little had changed throughout history, when parents had large families as infant mortality was so high. These days parents are given time to hold the baby, spend time together with them and even take pictures. The Victorians would have understood this as they were very fond of memento mori pictures. It’s quite sad therefore that following WW2 there seemed to be an attitude of stiff upper lip, pulling yourself together, soldiering on and keeping calm and carrying on. 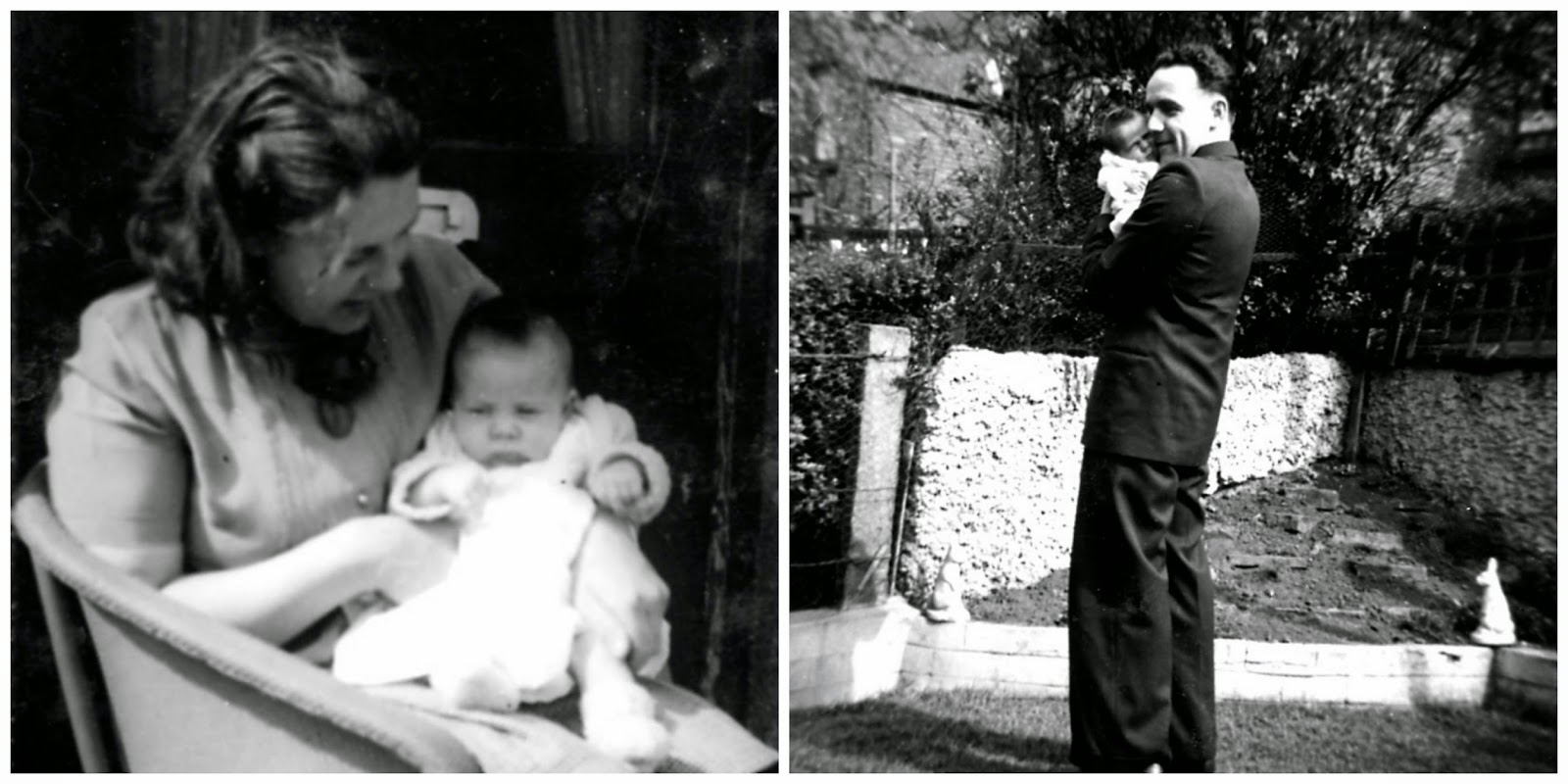 When I was born two years later my parents would have been relieved as well as delighted to have a healthy child. The twins were rarely mentioned when I was growing up, as was the way then, but later when they spoke of them it was always with a good deal of sadness. Thereafter they never celebrated St. Valentine’s Day romantically as the memories were too painful. Had they been allowed to express their grief fully, and not had to suppress their emotions, they could instead have used the date to remember and celebrate the very brief lives of their lost children.

It has always troubled me that it was as though the twins had never been, as there is no tangible memorial, other than a combined birth/death certificate, I am told, though I have never seen it. In UK, the Sands (Stillborn and neonatal deaths) charity now ensures that this need never be the case again. A link to their website here, shows the many wonderful ways they have of helping parents and families. There are bereavement support packs, ‘Lights of Love’ services, a National Memorial Arboretum (2000), Baby Loss Awareness Week and a poetry anthology. 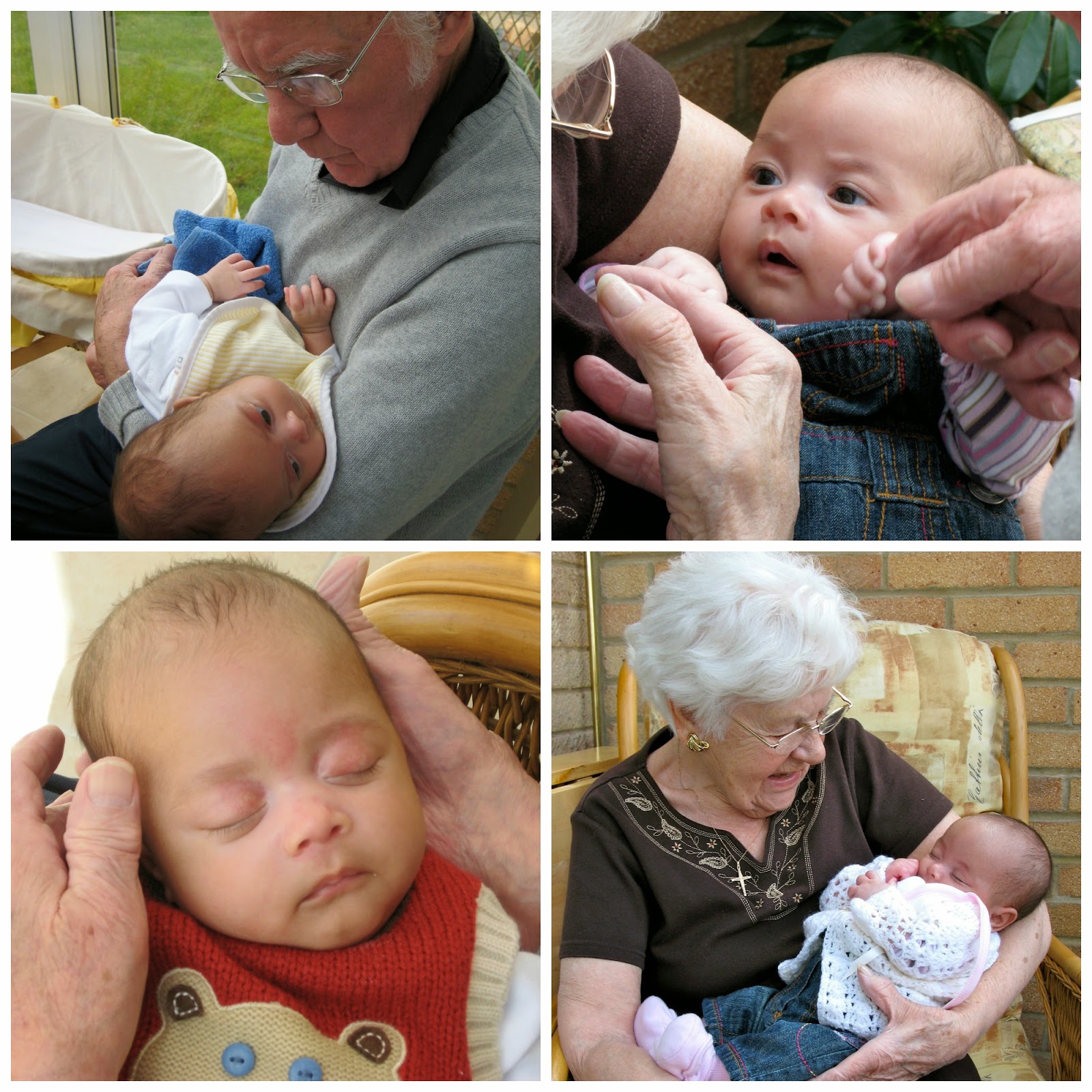 When my twin grandchildren were expected in 2008, also in February,  many memories and emotions must have surfaced for my parents, but I hope their obvious delight in their new great-grandchildren (not born on Valentine’s Day) helped them to overcome them.

This weeks’ Sepia Saturday has fallen on St.Valentines’ Day and I thought it was a golden opportunity to remember those brief lives of my siblings. Perhaps I would not have been born myself if they had lived, and fate can play a curious hand, but as I am here and they are not, I wish their spirits, wherever they are, peace and love. Whether there is life eternal I do not know, my parents certainly believed so. Dad is no longer with us but I’m sure Mum still holds the memories of her babies in her heart, as tenderly as she holds her great-grandchildren in these pictures.