This is a painting done by my late father, of the place where he lived from about the age of four to ten years. The family moved from here around 1930 when my grandfather Sam, who worked on the railways, was allocated a railway house at Barnsley Terrace, on Glapton Road. All those houses are gone now, as they were demolished in the 1970s and new houses built in their place. Anything with ‘terrace’ or ‘street’ in the address seems to have been re-named ‘gardens’ or ‘walk’, thus Uppingham Terrace is now Uppingham Gardens, and Lammas Street, where Dad was born, is now Lammas Gardens; not exactly gentrified, but a far cry from The Meadows area of old.

The Meadows suffered from overcrowding and unsanitary conditions during its history. In the 1890s the fields surrounding the city were developed and a rapidly expanding population was crowded into a restricted city area where outbreaks of cholera and typhoid were common. After the 1845 Enclosure Act, Victorian brick terrace houses, shops, pubs and factories were built. By the 1920s, when Dad was born, the scene above would have been a familiar one.

Dad and his siblings and cousins enjoyed a reasonably happy childhood in the area. Dad remembered the gas street lights being changed to electricity whilst he lived there. Around the age of seven Dad was allowed to play out on the street and nearby waste ground, which is where his lifelong love of football began. The area also offered Life Boys and Boys Brigade at Bridgeway Hall, swimming at Portland Baths and River Trent Baths. Dad also sang in the church choir at St. Margaret’s and St. Saviour’s and had a newspaper round at a newsagent’s on Arkwright Street. He was allowed to keep some of his earnings for pocket money, which he supplemented by running errands for neighbours and Nottingham Forest footballers. The proceeds usually went on books. 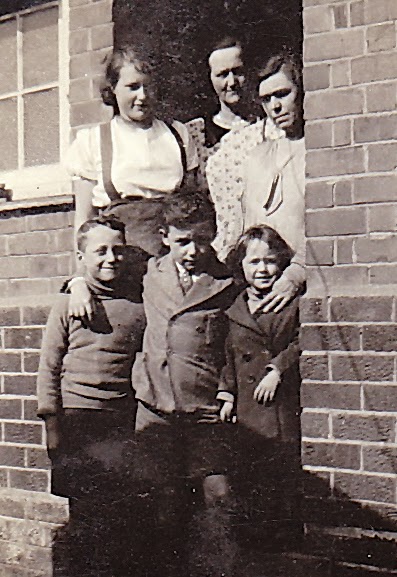 The picture above shows Dad (centre front) with his mother, aunt, cousins and sister, probably at his aunt’s house in Lammas Street, The Meadows,where he was born in 1921.

Here is the photograph I believe Dad may have used to help him with his painting. I’ve recently discovered that he took a number of pictures during the 1970s of his old haunts and this was amongst them. Clearly at that time it hadn’t changed very much from his memories of the place. 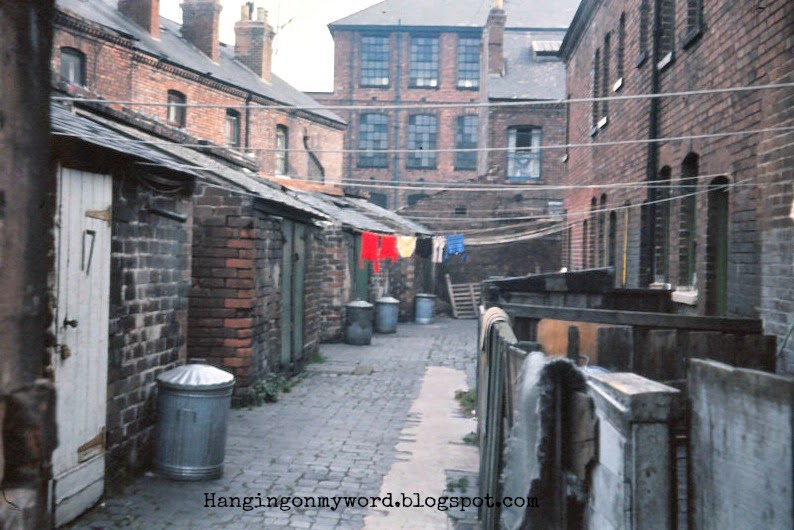 For more stories of backyards, gardens, fences or terraces, go over to Sepia Saturday this week and see how other contributors have matched the prompt picture.
Posted by Little Nell at 01:43

Email ThisBlogThis!Share to TwitterShare to FacebookShare to Pinterest
Labels: Nottingham, sepia, The Meadows