In Xanadu did Kubla Khan
A stately pleasure-dome decree:
Where Alph, the sacred river, ran
Through caverns measureless to man
Down to a sunless sea.
Coleridge 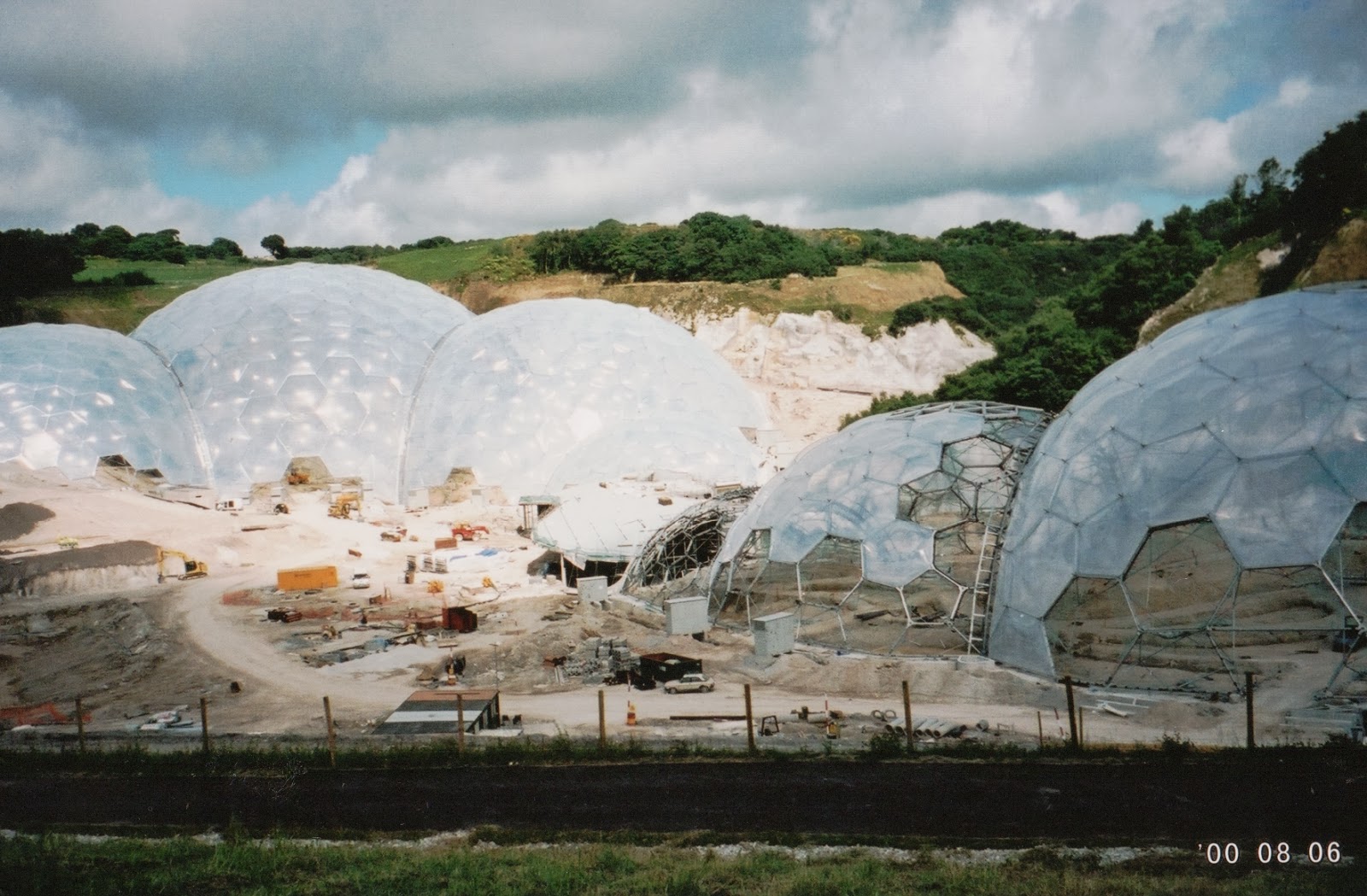 Sepia Saturday’s picture prompt this week suggested domes as a possible theme. My domes are not those dreamed of by the poet Coleridge, after taking opium, but they brought pleasure nevertheless. This picture was taken on a visit to the Eden Project, near St. Austell in Cornwall in 2000. Some of the giant domes or ‘biomes’ were still incomplete but the site was open to visitors. We were on holiday with friends and it was the place to go that summer. The project was the vision of Tim Smit, who had also been responsible for restoring 'The Lost Gardens of Heligan’.

Once again, I think we took more movie film than stills, but there are a few postcards and souvenir snaps of our friends enjoying the day. If my memory is correct we were put in trains and driven round the site, hence the hard hats as it was still under construction. The domes consisted of hundreds of hexagonal and pentagonal inflated plastic cells supported on steel frames, and housed thousands of plant species. You can read more here.  I think we later re-visited with the intention of seeing how the project looked once it was established, but didn’t get further than the main door as the entrance fee was around £50 for the two of us. I know there was a lot more to the attraction than the biomes; art displays and exhibitions and so on, but we’d already enjoyed those the first time round. 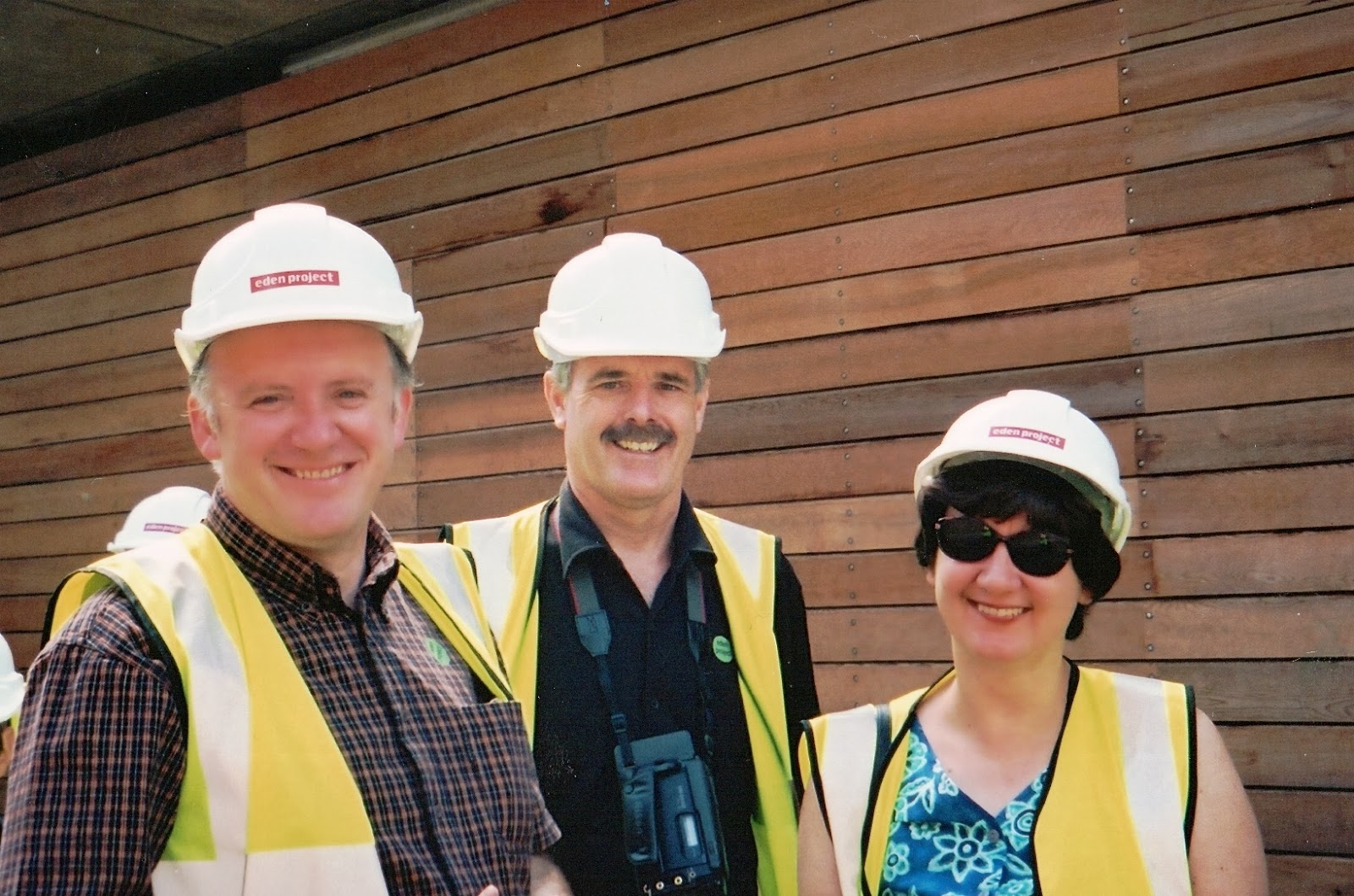 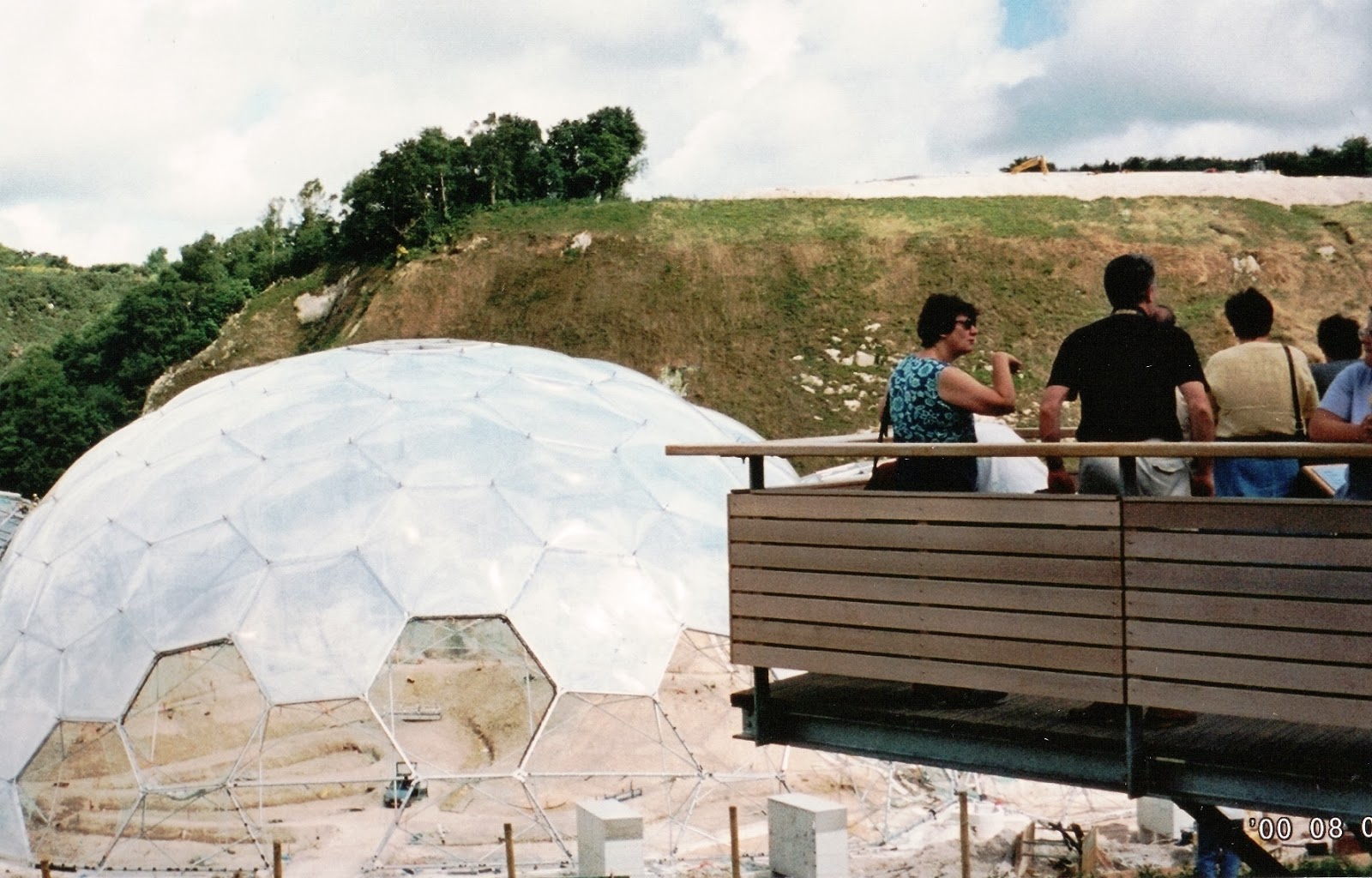 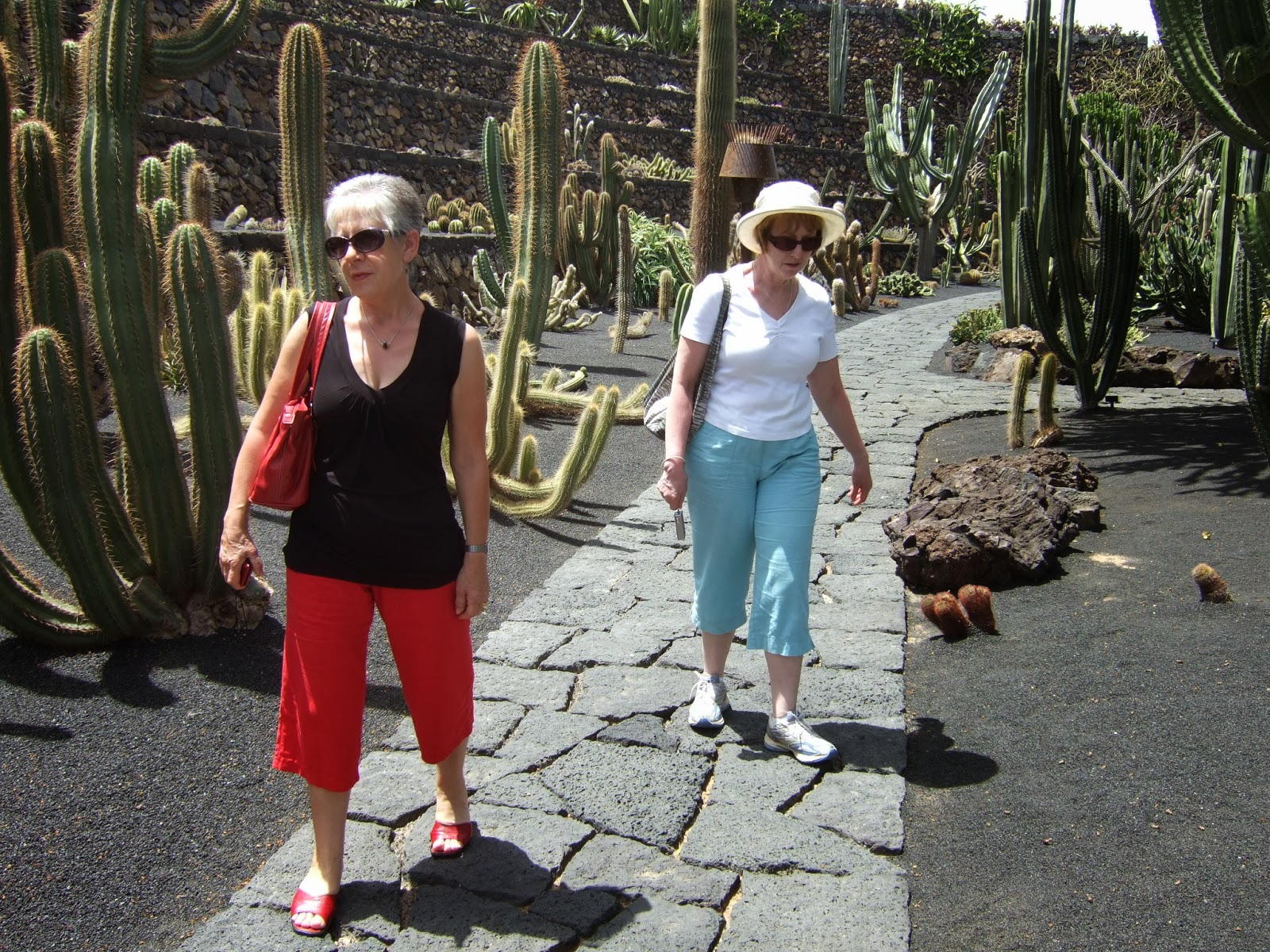 The Eden Project is housed in a disused China Clay pit and here in Lanzarote we had our own man of vision, César Manrique, who designed practically all the visitor attractions and ensured that it did not become an island of high-rise hotels. I have written about the Jardin de Cactus (Cactus Gardens) before on my blog, but it’s worth mentioning again as a contrast to the Eden Project. Manrique started work on his gardens in the 1970s, although they didn’t open until 1990. They are also built in a disused quarry and the old mill stands above the the gardens, serving as a great lookout for the surrounding landscape. My friend and I are pictured taking a walk last year amid some of the amazing cacti. 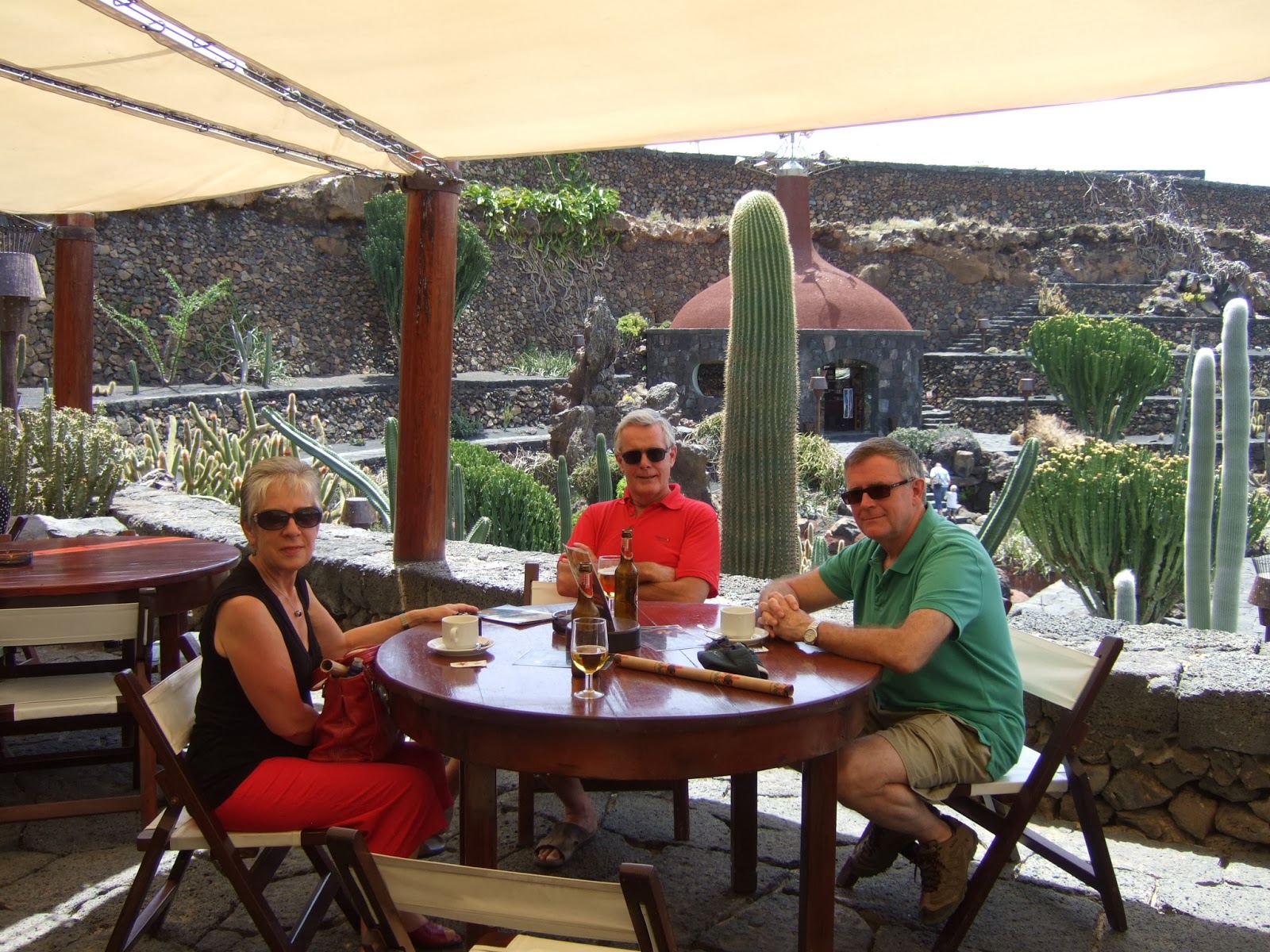 On the Lanzarote Information site you can see some pictures of the gardens under construction in 1971 and at the inauguration in 1990. It’s one of my places to visit here and only costs a few euros so nobody has second thoughts at the entrance. In fact most people are already in awe of the giant cactus sculpture in the car park and can’t wait to see what delights the garden itself holds. The answer of course is hundreds of species of cacti collected from around the world.

Manrique was responsible for initiating the proposal to declare Lanzarote a UNESCO Biosphere Reserve which was achieved in 1993; sadly he had died in a car accident the previous year.

I had to end with that last picture of us enjoying refreshments in the restaurant, because it includes another dome-like structure (which houses the tiny gift shop) in the background.

Lanzarote is a volcanic island and there are caves and lava bubbles aplenty creating domes of their own, but that would require another blogpost. I’ll leave you with this link however, Into the Lava Dome, which describes some of the beauty to be found there.

For more domes, arches or libraries travel to Sepia Saturday and see what other contributors have found.
Posted by Little Nell at 11:26