Yes, a familiar tree, not a family tree, which is what my genealogist blogger friends (and many fellow Sepians) would recognise.The above mighty oak is one which I have known since childhood. It is known as The Major Oak and my family and I would enjoy visits to the ancient woodland where it grows in Nottinghamshire. On one occasion, c1964, we took my friend along and my Dad snapped us inside a much smaller but still impressive tree. 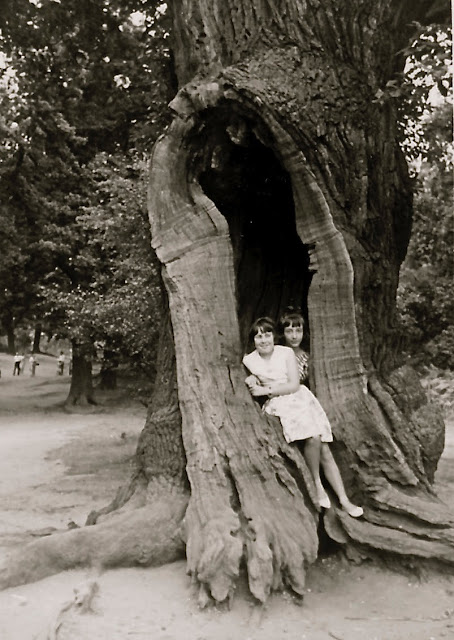 I wrote about this particular tree in Going Back to My Roots in 2011:

"Here I am aged about ten years, with my childhood friend, Pearl, on a visit to Edwinstowe to see 'The Major Oak'. I was born in Nottingham and many of our family outings in the 60s would be to Sherwood Forest, legendary home of the outlaw Robin Hood. The forest is home to hundreds of ancient oaks like the one above, but of course the Major Oak was the most famous. It is over 800 years old and has a history all of its own. I was brought up on stories of the oak being the hiding place or larder of Robin and his Merry Men, and I never failed to feel excitement and wonder whenever we visited. Just walking into the wood and getting that earthy tang of trees, fern, bracken, fungi and moss was enough to lift the spirits."

In 2014 The tree was voted England’s Tree of the Year; here is a link to the Guardian Newspaper article about it.

A few years ago I 'became the tree' in my imagination for a creative writing exercise, where I imagined my special relationship with the legendary Robin Hood. Here is the piece I wrote. I hope you enjoy it.


They have made me part of his legend. I stand in the heart of Sherwood Forest, my massive girth dwarfing my younger brothers. My twisted branches, home now only to woodland creatures, were once his childhood hiding place. Then the forest was deep and dark and not a place to venture lightly, but he was always fearless, climbing to my uppermost branch, to survey the land. A skinny lad, fleet of foot, quick-witted, he always had a gaggle of followers, hanging on his word and aping his actions. Later, when he had fallen foul of the law and with a price upon his head, he would whisper his secrets and fears to me. Once he brought a lovely young woman by the hand, and laughingly drew her into my hollow trunk, and there.....but no, I will not tell.

I would watch them as they sat on my gnarled roots. The scraggy boy now grown tall and muscular, with a commanding presence, his playmates replaced by trusted and devoted men. They would practise their archery in the nearby clearing, eat, drink, laugh and sing together, the young woman watching with adoring eyes.

It was not all merry, there were dark days too; violence, bloodshed and eventually, death. Centuries have passed and men have woven stories about his deeds until no-one can be certain of the truth anymore. I know, but I will never tell; I have sworn to keep his secrets for eternity.

Join us at Sepia Saturday this week, where our prompt picture is a wonderful old image of the tree which stood at the centre of England in Leamington.** 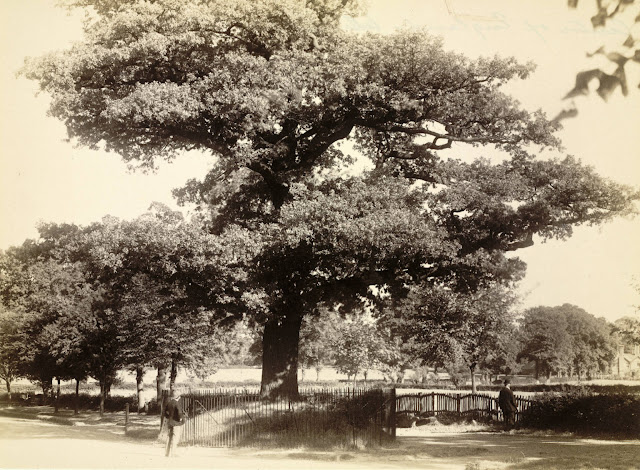