The Foleys shut up shop and turned the ‘OPEN’ sign
to CLOSED, They packed their bags and filled the travel chest:
Her novels, sketchbook, pens, his fishing rod and line,
Their walking shoes and sticks and Sunday Best;
Her dress, her lacy ‘smalls’ and Summer hat so fine,
His boater, suit and tie, his drawers and woollen vest.
Then last, the caged canary, dog and flowers, were stowed,
The caravan was ready for the open road.

The above charming photograph is our prompt image for this week’s Sepia Saturday challenge, and comes to us courtesy of The National Library of Ireland via flickr Commons. The poem is a flight of fancy; I’ve no idea whether the Foleys (if the lady is indeed Mrs Foley, there is a question mark on the caption of the post in flickr) had a trade. Nor do I really believe that the caravan was towed, complete with flower pots,  from Sweetbriar Terrace to Tramore.

I haven’t any similar bucolic scenes in my family albums, but we recently acquired a photo of my husbands’ grandparents taken two years later. They too are on holiday, in Colwyn Bay, in August 1920 and are similarly attired. Alice wears her best dress and a style of Summer hat which matches Mrs Foley's, whilst George too wears a smart three-piece suit, just as Mr Foley does. Last week we saw him in a bowler and a trilby, but here he favours his golfing cap. Those were the days when people really did dress up on holiday. 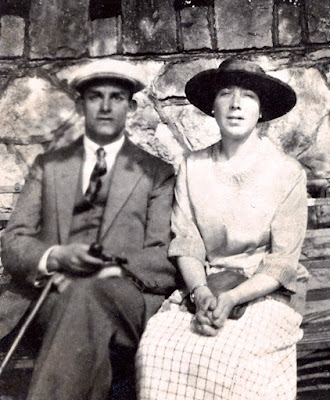 And the shy teenager on the right is my own grandmother in 1916, wearing her Summer hat at a similar jaunty angle to Mrs Foley's. 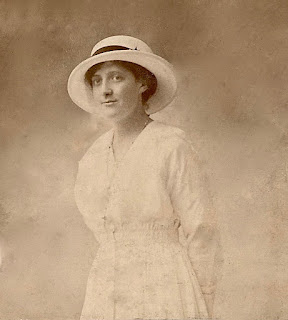 Join us this week on the Sepia Saturday caravan, to see how other contributors were inspired by the prompt image.
Posted by Little Nell at 09:23