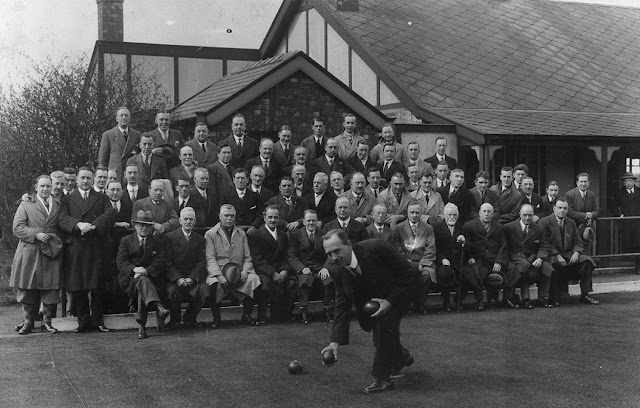 The above photograph is one of several similar images which were from my husband’s grandfather, George. He is the gentleman seated front row on the right. The occasion was the official opening of the Bowling Green* on 18th April 1930. It was Good Friday when tradition dictated that the bowling season would be officially opened by a local dignitary or club member being invited to bowl a jack and three woods. I have no idea what that means as I am not a bowls aficionado, but clearly it was deemed an honour to do so, and was never offered to the same person twice.

What we have discovered by scanning across the faces of the other members, is that my father-in-law is also in the picture. At that time he was a young man of twenty-two and probably already courting my mother-in-law. He is third from the left. 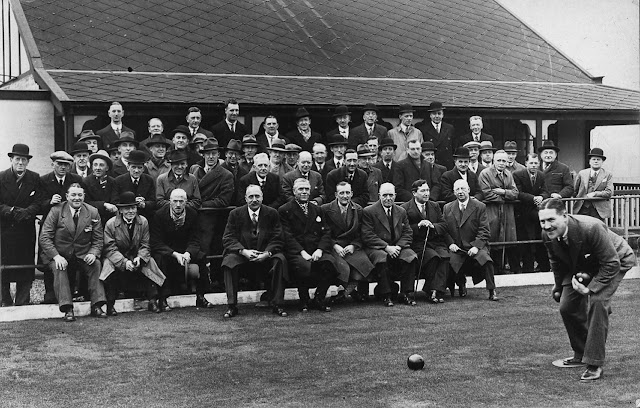 I also discovered him on the 1934 photo above, taken again on Good Friday, 30th March. He is the scarf-wearing chap, smiling away three rows from the front and three in from the left. He was already a married man by then and was standing a little closer to his father-in-law, who is peering over the head of the bowler-hatted gentleman in front of him.

Which brings me to another bowler altogether, the bowler hat, of which there are several examples here. It has nothing to do with bowling and owes its name to its designers, Thomas and William Bowler of London.

In the few pictures we have of George wearing a hat it is is usually of the flat, golfing type or a trilby. However, those with a long memory will know that he carried off the wearing of a bowler with aplomb, at the age of about fourteen, around the turn of the last century. He featured in a piece I wrote about his sister called The Eyes of Margaret, where you can read more about George. 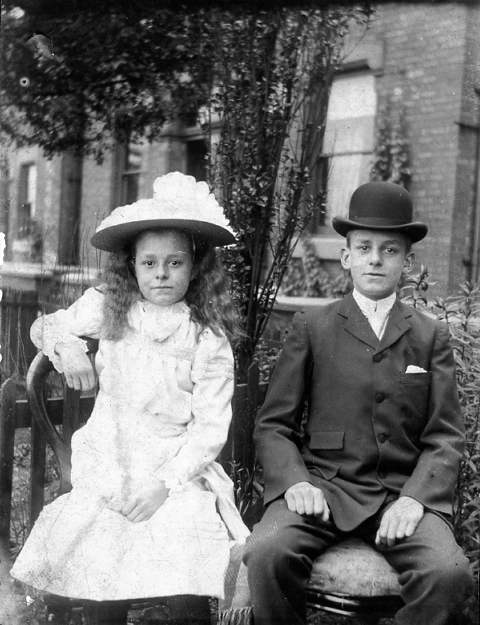 Our prompt image this week has a bowler-hatted gentleman making, or packing, boxes in a yard. I decided to 'think outside the box’ and bowl you over with my play on words. I hope you are duly impressed. For more impressive posts join the bowling club that is Sepia Saturday and see what other contributors have come up with.

* We think it may be Ashton-under-Lyne.