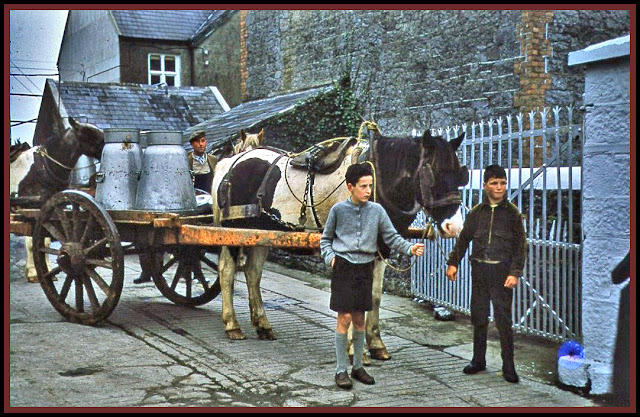 The wonderful image above by Don O'Brien is called 'Irish Boys and Milk Cart'. Don tells us that the boys were delivering milk to a creamery somewhere in the south of Ireland." I recall that we landed at Shannon in mid morning during October 1962 and drove south to observe dairy operations that were simple and picturesque. The folks we met were cordial. The cart-puller appears to be a Holstein."

It reminded me of the first time I heard the word 'creamery' when we were holidaying in Ireland in 1997,  and passed a sign that read 'Danger Creamery Exit'. For some reason this caused us both to laugh out loud because it conjured up an image of gallons of cream pouring out into the road (and no, we hadn't been at the Guinness!). In England we were more familiar with the word 'Dairy'. Creamery seems to be a word more used in Ireland and America.

Our Sepia Saturday picture prompt this week has an Australian farmer astride a horse, and carrying a milk churn, with the caption 'Off to the Creamery'. Don O Brien's picture has the horse and the milk churns, and the family are indeed 'off to the creamery'

Dairies and saucy dairymaids had often appeared in English and Irish folk songs, in old advertisements (for Fry's Chocolate) and in paintings. Thomas Hardy (1840-1928) wrote a both a poem, called 'The Milkmaid' and a novella, 'The Romantic Adventures of a Milkmaid'. Occasionally there is mention of the milk churn or pail itself. In Shakespeare's poem, 'When Icicles Hang by the Wall', he evokes the bitter cold by telling us that Dick the shepherd blows his nail, Tom bears logs into the hall and milk comes frozen home in pail'. Dylan Thomas in 'Under Milk Wood' describing the early morning scene in the town, adds: 'Milk churns stand at Coronation Corner like short, silver policemen.'

Flickr Commons has a whole category given over to Milk Churns (or cans) where we are spoilt for choice with images ranging from black and white pictures of rural life, through Cezanne's 'Still Life With Carafe, Bowl, Milk Can and Orange', to modern colour photographs showing the many uses to which the humble milk churn can be put; It's the latter of which I have chosen to show a selection here. Apparently churns are much sought after on Ebay as planters for herbs and flowers, as roadside signs and as an object d'art for primitive painting or canal art. So if you fancy having a go at any of these, it's off to the Creamery with you. Don't forget to stop on the way to see what other contributors to Sepia Saturday have made of the prompt. 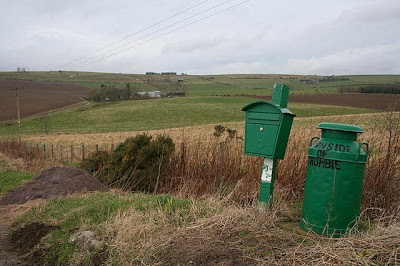 Des Colhoun's roadside sign has the following note: 'Non rustics may be not aware that the container to the right of the postbox is known as a milk churn in England and Scotland. In Northern Ireland they are more accurately known as creamery cans as in distant times the milk produced was collected daily from the farms and taken to the dairies (England and Scotland) or creameries. (Northern Ireland) A churn of course is a device in which butter is made.' 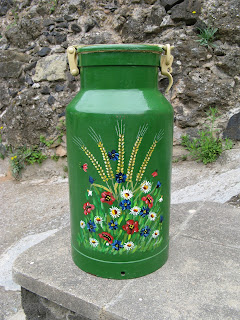 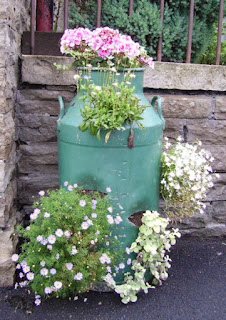 German 'peasant art' is displayed on this milk can from Ostfildern, south of Stuttgart, whilst in Hawes, North Yorkshire the churn is put to use as a planter for flowers. 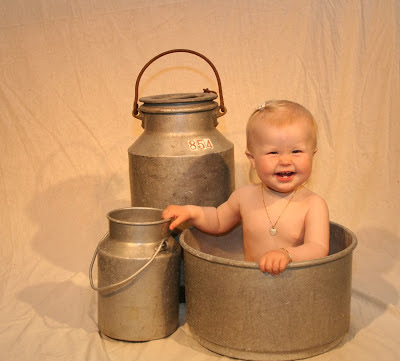 When the baby bath is nowhere to be found, place your infant in a milk basin with a cuddly milk pail to hold onto and a friendly churn to watch over her. 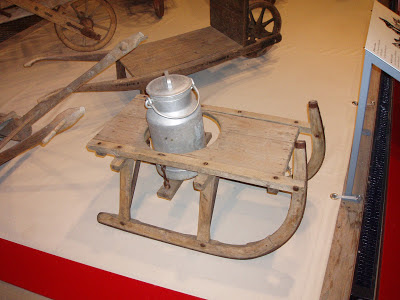 No horse, nor bowler-hatted farmer to cuddle to milk on its way to the creamery? How about this purpose-built sledge, found in the carriage museum in Heidelheim. The milk really would come frozen home in pail!