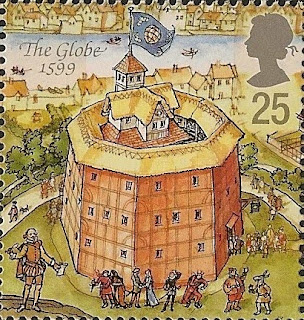 But pardon, and gentles all,
The flat unraised spirits that have dared
On this unworthy scaffold to bring forth
So great an object: can this cockpit hold
The vasty fields of France? or may we cram
Within this wooden O the very casques
That did affright the air at Agincourt?

On this day in 1613, the first Globe Theatre in London was burned to the ground. It had originally opened in 1599 and Shakespeare had written his most famous plays for its company The Lord Chamberlain's Men, to which he belonged. The most powerful roles were written for the actor Richard Burbage. These included Hamlet, Othello and King Lear. The 'Wooden O' referred to by the Chorus in the prologue of HenryV is probably The Globe, where the play would have first been performed. 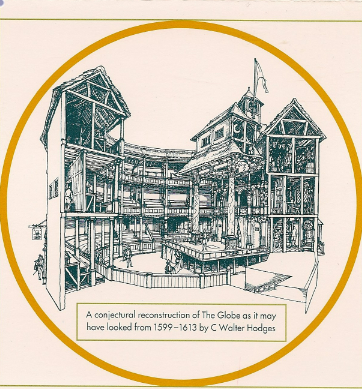 It was a spark from a stage cannon which set the thatched roof ablaze and led to the building quickly burning down. A new Globe arose like a phoenix from the ashes and continued to prosper until it was closed down by the Puritans. It was later demolished and the site forgotten until 1924, when a small plaque appeared on a brewery wall on the supposed site. It was there that a young actor named Sam Wanamaker found it and, disappointed that there was not a grander memorial, made a vow to somehow re-create the Globe as near to the original site as possible. The story of how his sheer determination and hard work paid off can be read here. The new building, named 'Shakespeare's Globe Theatre' opened in 1997 and has been delighting audiences ever since. I have not been fortunate enough to see a performance myself but I have seen TV recordings of the plays. Great fun, but of course the television can't convey the atmosphere.


The pictures come from my own set of Royal Mail mint stamps, designed by C. Walter Hodges issued in 1995 and titled 'Shakespeare's Globe and The Bankside Theatres' to commemorate the vision of Sam Wanamaker and the South African architect Theo Crosby, and to mark their 25 year partnership and the realisation of their dream. Sadly, both men died before the theatre was officially opened. 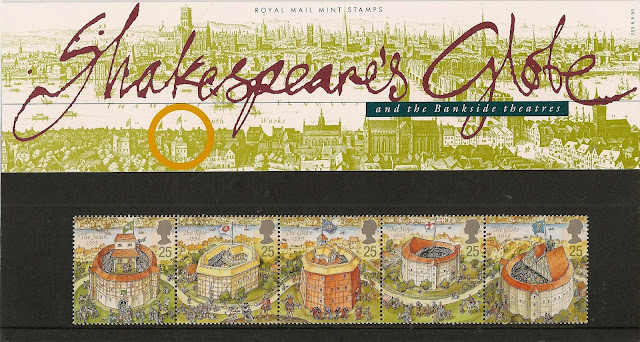 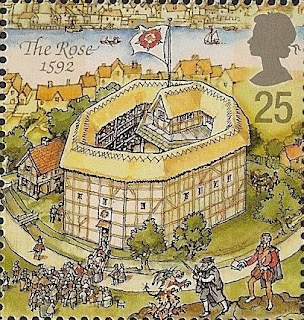 The fold-out information leaflet which comes with these stamps, tells us that Southwark's Bankside was already a thriving entertainment centre before the first playhouse, 'The Rose' was built in 1587 and enlarged to the shape depicted on the stamp in 1592. On a recent trip to Southwark we were lucky enough to visit the site of the original Rose theatre, where volunteers give daily talks, and a film presentation. They hope to raise enough funds to begin more archaeological work in the next year or so.  More pictures here.It was a fascinating eye-opener for me, and the visit was entirely free, relying on donations to keep going. We almost missed it and if it wasn't for following some arrows on an A board, pointing down some backstreets, we certainly would have. I can recommend it if you are ever in the area. There's also Southwark Cathedral, the wonderful Borough Market and a reconstruction of The Golden Hinde, Sir Francis Drake's ship to see. As we did!

Three years after The Rose came 'The Swan', a little further upriver, opposite Blackfriars, and in the same year as the Globe's destruction, a rival theatre company built 'The Hope' which doubled as a bull and bear-baiting ring. Then in 1614 the brand new Globe was opened for business. The leaflet says it was 'The Shaftesbury Avenue of its day'.

Sharing this with my friends at Sepia Saturday and with Viridian's Sunday Stamps. View the pictures and leaflets more closely in my Flickr set here. 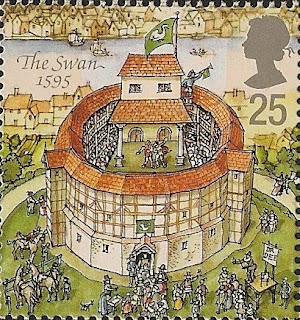 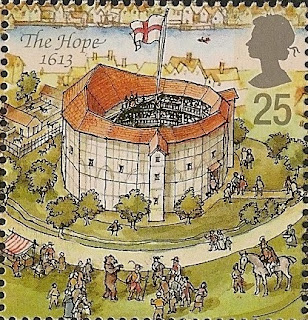