The Black Pepper is Very Pungent 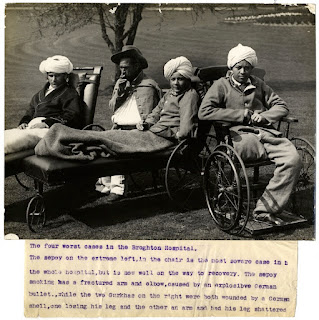 In the early stages of WW1 the Lahore and Meerut divisions of the Indian Army took part in some of the fiercest fighting around Ypres in 1914. Losses were heavy and the fighting came as a shock to soldiers more used to colonial warfare. One man wrote home, "This is not war; it is the ending of the world." The Indian Corps provided half the attacking force at the Battle of Neuve Chapelle in March 1915, and the Lahore Division was thrown into the counter-attack at the second battle of Ypres in April. The Battle of Loos in September meant further heavy losses. Two divisions were moved to Mesopotamia in December, where it was easier to send supplies and reinforcements from India, but two remained on the Western Front until March 1918, when they were transferred to Palestine.

Although no letters (usually dictated as most of the troops were illiterate) have survived, excerpts, attached to the chief censor's report, can still be read. The soldiers soon became wise to the censor's monitoring and found creative ways of getting round it. One man wrote; "The black pepper is very pungent, but only a little remains," indicating to the recipient that it would be unwise to enlist as the Indian troops had suffered heavy losses. The bravery and loyalty of the Indian soldiers could not be doubted though, and most letters talked of fighting for the King or for honour, rather than for India. One soldier had written that his name would be written in letters of gold and inscribed in the list of the brave. His prophecy came true when by 1927 the last of the reminders of the sacrifice made by the Indian Corp was completed. 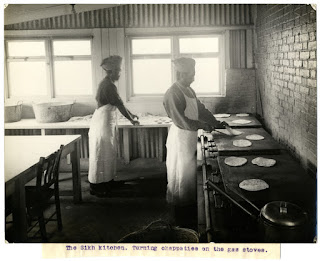 By November 1918, some 827,000 Indians had enlisted in addition to those serving in 1914. Official figures suggest that 64,449 Indian soldiers died in the war, their names carved on the massive memorial arch in New Delhi, on the Menin Gate at Ypres and on the main memorial to the Indian Corps at Neuve Chapelle. 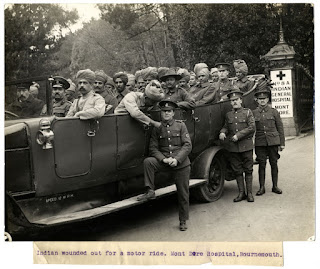 Our Sepia Saturday prompt this week was of a kitchen in a hospital train in WW1. I had come across these interesting British Library images a few weeks ago and this seemed an ideal opportunity to share them; many have been been allowed in the public domain through Wikimedia Commons.

There are WW1 hospital and kitchen images aplenty to choose from, but instead of a train we have a charabanc outing. I wonder what the Indian passenger leaning over the side is saying to the nonchalantly posed soldier.


I am also indebted to the BBC's History website and an excellent article by Dr David Omissi,  India and the Western Front in providing the information and quotes above. I can recommend it for further reading. The images are of The Dome Hospital Brighton, The Kitchener Hospital, Brighton (follow the link for more pictures) and Mont Dore Hospital in Bournemouth.

Click on the images to enlarge or view as a slideshow in Lightbox.


Why not climb aboard the Sepia Saturday charabanc and see what other contributors have made of this week's prompt? If you are a Facebook user you may be interested in our Sepia Saturday group page too.