"If a man is poor he had only to go to Nottingham with a mattock, a shovel, a crow, an iron, a chisel or a mallet, and with such instruments he may play mole and work himself a hole or burrow for his family."
—Anon 1870 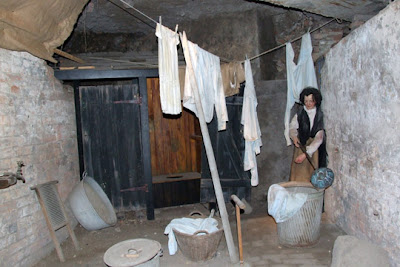 The city of my birth, Nottingham, England, has something in common with the place I live now, Lanzarote in the Canary Islands - caves. I was brought up with the knowledge that underneath the city ran a vast labyrinth of some five hundred caves, which over the centuries have been used for public house cellars, a tannery, air raid shelters and for general storage and living accommodation. 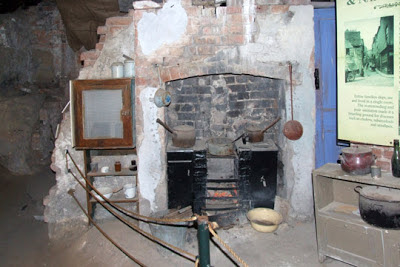 They have been inhabited and worked in for over 1000 years, and they are all handmade! The city is built on bunter (Sherwood) sandstone, which is very soft and easily carved into with simple tools. Many of the caves were almost lost during the building of a new shopping centre in the late 1960s, but they have now been preserved as an ancient monument, and since 2004 The City of Caves has been a designated tourist attraction. The pictures above and below are from Nottingham21.co.uk, clicking here will take you to a gallery of the caves.

Ray Teece, who owns the site, and who has generously allowed me to use his images, was given access to areas not generally open to the public and there are some fascinating pictures. 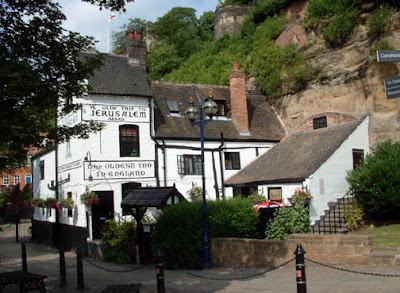 Under Willoughby House are caves once used as air raid shelters during WW2 but which at one time, Ray says, may have been used by the gentry to have a cool drink in equally cool surroundings. In 1189 drinkers were enjoying ale which had stored deep in the cellars of the 'Ye Olde Trip to Jerusalem', arguably the oldest pub in England, and the caves of which are said to have run directly to Nottingham Castle, perched on the rock high above. 'Mortimer's Hole' is perhaps Nottingham's most famous cave, and played a part in British Medieval history. It is supposed to be the tunnel where Edward III's soldiers entered the castle and captured his enemy, Roger de Mortimer.

A two year Cave Survey is currently being carried out by Trent and Peak Archaeology, University of Nottingham, using laser scanners, which produce 3D images, to record the layout of the caves and tunnels beneath the city.The link takes you to the website where the techniques is explained and where unusual and exciting videos can be viewed of the results of their survey. They have a somewhat ethereal quality and are accompanied by wonderfully appropriate music. If you've time have a look at more than one - they're fascinating.

This one shows the Herbarium Cave, one of Victorian lace manufacturer Thomas Herbert's spectacular garden caves. It was heated with a hypocaust system and may have been used to provide heated seating for Alderman Herbert's guests. Another great place to have a drink or a party.

In Lanzarote, our caves are not man made. The majority are the results of ancient volcanic eruptions and they are dotted all around the island. Some are accessible only to experienced cavers and others have been further enhanced and developed as natural auditoriums for concerts, such as the spectacular Jameos del Agua, created by the artist and visionary César Manrique. Manriques' own home, now an art gallery and visitor attraction, was also built from a volcanic bubble. Manrique rubbed shoulders with the rich and famous and his guests would also have enjoyed a drink in stunning surroundings. Another brilliant place to have a party. I wrote about it in this blogpost, and here is my favourite underground place to chill (if only). 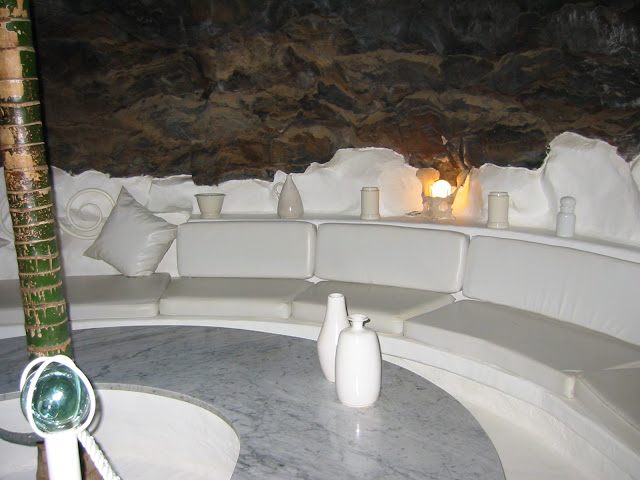 Our Sepia Saturday prompt this week was a picture of the Wombeyan Caves and it will have led contributors down all sorts of rabbit holes in a bid to match the theme. Why not join the rest of the troglodytes and see what they found?