This month Queen Elizabeth II celebrated the 60th anniversary of her coronation. I don't remember the event as I was a baby at the time, but my mother tells me that the family had a television for the occasion. My parents were never well-off and would have had to make some sacrifices to be able to afford it. My mother wanted a washing machine but my father insisted that the television would benefit everyone (!) whereas the washing machine would have made only my mother's life easier. Mum's pleas that she would have been less worn out by domestic drudgery and therefore a much nicer person to live with, thus ensuring the entire family benefited, fell on deaf ears. Mum continued to wash the family laundry in an old fashioned copper 'boiler' and then put it through a mangle. All the neighbours, who had purchased modern cleaning and washing machines, but failed to equip themselves with the means to watch this exciting event, went round to my parents' house to share their television for the occasion.

The picture on the right is made available on Wikimedia Commons here. The inscription states:

"Queen Elizabeth II of the United Kingdom during a state banquet in honor of Brazilian president Lula da Silva at Buckingham Palace, London. The Queen wears the insignia of the Grand Collar of the Brazilian National Order of the Southern Cross (namely, the Grand Collar itself and the Star). Also worn are the insignia of the Royal Family Orders of Kings George V (white background) and George VI (pink background), and also the aquamarine necklace and other jewels that were given her by the Government of Brazil as a Coronation gift, as well as the aquamarine tiara, commissioned by the Queen in 1957 to match the jewels that had been given to her by the Brazilian Government."

That is an awful lot of jewellery, but most of it was worn for diplomatic reasons, not because it matched her eyes! It was only right and proper that she should wear the jewels bestowed upon her as coronation gifts by the Brazilian Government. I do like the idea that the Queen commissioned a tiara to match the necklace, making accessorising so much easier, and of course with all that sparkle the handbag had to be silver.

Our Sepia Saturday prompt this week shows a woman 'with elaborate cameo jewelery and off the shoulder dress'. I thought she's raided her jewellery box in order to show off off all her treasures, but beside the photograph of the Queen she appears positively understated. When I chose the prompt I had no idea what I was going to post, but watching footage of the coronation I realised I couldn't let the occasion slip by without a mention and searched for images on the web. The one above is a 'gem' if you'll pardon the pun.

I may not have a memory of the coronation but I do have an official souvenir programme. I also had a coronation crown coin at one time too. Many were minted and can be found on ebay for very little. 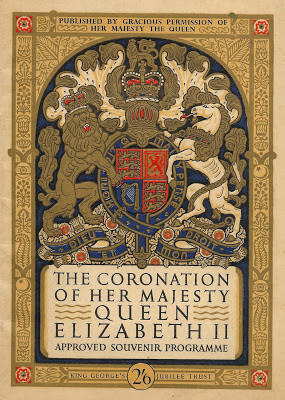 I have copied the contents of the programme and they can be found on flickr here. I like the black and white portrait of the young Queen on the first page, quite a contrast to the one above. I also enjoyed reading the poem by the Poet Laureate of the day, John Masefield, who has featured before on my blog, in 'Mad March Days', and 'The Box of Delights'. It's interesting to compare it with 'The Crown', written by the present Poet Laureate, Carol Ann Duffy, to celebrate the Queen's sixty years on the throne. 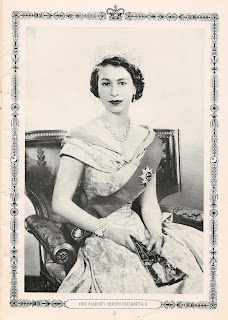 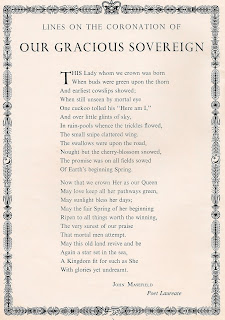 Shakespeare, in Henry The Fourth Part Two says, "Uneasy lies a head that wears a crown," and it's certain that the Queen has had many hours of unease during her reign, and I'm sure she wondered if she would still be monarch so many years hence, when she made her smiling appearance on the balcony of Buckingham Palace after the coronation ceremony. And for Over The Top adornment, how about the model crown in the picture, being assembled in Brisbane, Australia to mark the coronation. 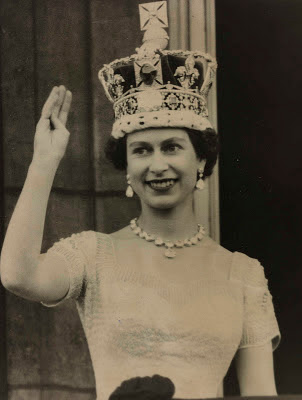 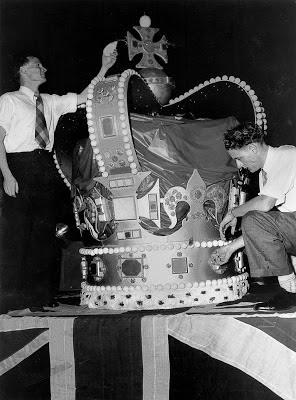 Both pictures above come courtesy of Flickr Commons. Prepare to be dazzled by more sparkling examples from the treasure chests and jewellery boxes of Sepia Saturday participants with their responses to this week's prompts.
Posted by Little Nell at 12:37