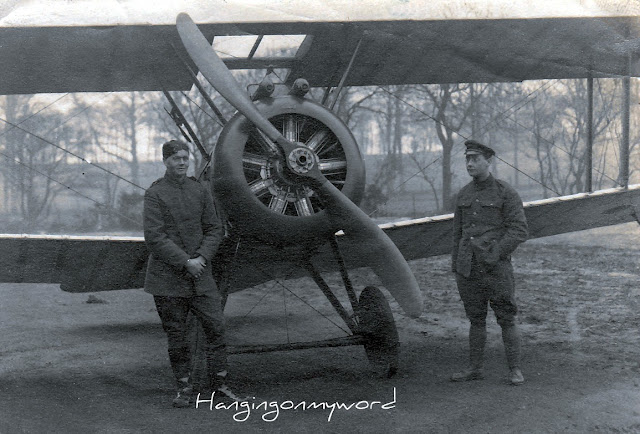 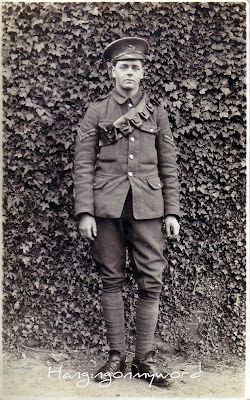 To commemorate the centenary of the founding of the Royal Flying Corps and link to the Sepia Saturday theme of Flight, I present my great uncle Albert (1885-1976), standing (left) by his Sopwith Camel. He was two years older than my grandfather Sydney and was the middle child of my great-grandparents, William Joseph and Mary Jane. At the start of the First World War he was an apprentice joiner, but joined the South Notts Hussars in 1914, later transferring to the Royal Flying Corps, first as an airframe rigger, and then a rear gunner. 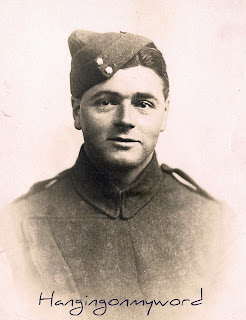 Albert appears in uniform of a different kind in ‘Drum Roll Please’, about his membership of the Boys Brigade.We don’t know much about his war service but my mother remembers him emigrating to Australia in 1924. She says she threw her arms round his neck and cried, and poor Albert was very upset by her show of affection. Mum was only three years old, so I can imagine it was quite a moving experience for him. He said goodbye to his family, who always kept in touch by letter, but never actually saw him in the flesh again. He would write to my mother all his life, and at Christmas, a parcel of Australian dried fruits would arrive for Mum to make her Christmas cake. I remember hearing his voice, because the family would send the old reel-to-reel tapes to each other. The last recording I have of my Grandad is his Christmas message to ‘Bert in 1970.  Albert remained a bachelor until, at the age of 70, he married Ellen, the widow of his long term friend,and the postmistress of Sailors Falls, Daylesford, near Melbourne. Looking at pictures of him, I imagine he was a charmer. Mum tells me he was a 'ladies’ man’ and I wonder how many hearts he captured when wearing his dashing uniform. 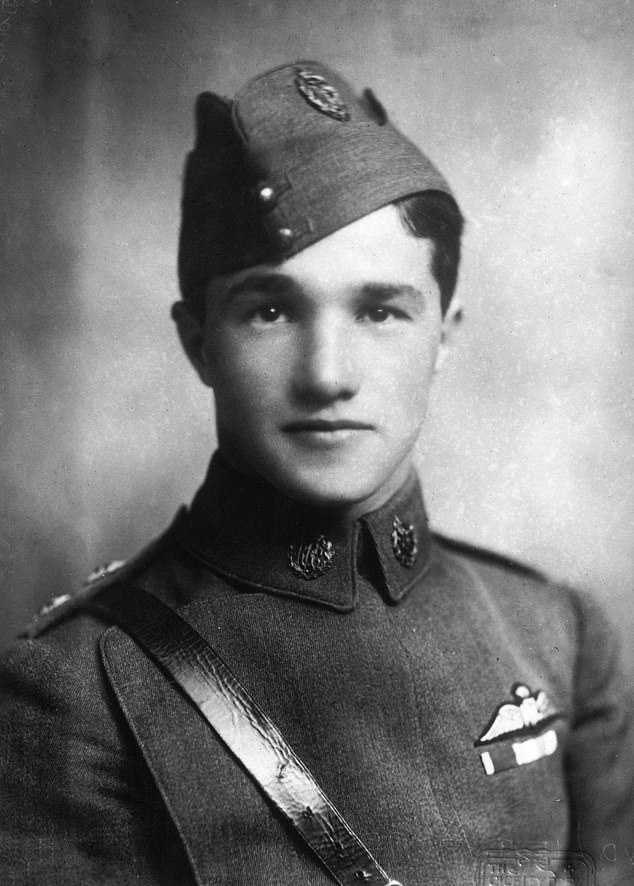 From my great-uncle Albert to his namesake, WW1 Flying Ace Albert Ball. Growing up in Nottingham I was always aware of the heroic Captain Ball; on family visits to Nottingham Castle we would pay homage at his statue and marvel at the record of his deeds and medals displayed in the castle itself. Ball joined the Sherwood Foresters, and transferred to the Royal Flying Corps. He too was a handsome young man, but he went on to become one of the top air aces of the war, gaining the Victoria Cross posthumously. No other pilot captured the public imagination in the same way as Albert Ball. He insisted on flying alone in his Nieuport Scout, where his fearlessness and deadly shooting accuracy, whilst skillfully handling his aircraft, brought fear and admiration from the enemy.  In a short period of just fifteen months he rose quickly through the ranks, gaining the MC, DSO and two bars, and was credited with at least 44 victories. There is an excellent website about Ball telling the fascinating story of his life and character, and where extracts from his letters can be read. I urge you to dip in and discover the human story behind the hero who died aged just 20 years, in circumstances which remain unclear to this day.


Living in Wiltshire, as I did for twenty two years before moving to Lanzarote, I was also close to the flying connection. We first moved there in 1987 when my husband was posted to RAF Upavon. The Officers' Mess at Upavon was the first mess for the Royal Flying Corps, and is now a listed building. The station motto was in Principio Et Semper  - “In The Beginning and Always” and the station crest was a pterodactyl rising from the rocks, symbolising the station’s connection with the early days of flying. Just a stone’s throw from our house was the Museum of Army Flying at Middle Wallop. If you find yourself in or near Wiltshire in the next few months, it may be worth paying the museum a visit, as an exhibition to mark the Royal Flying Corps’ centenary is planned.

Both portraits of Albert Ball are in the in the public domain courtesy of Wikimedia
Posted by Little Nell at 04:39