"Knowledge comes but wisdom lingers.” Alfred, Lord Tennyson. He is the ninth most quoted writer in the Oxford Book of Quotations, and many of his quotations have entered the English Language. 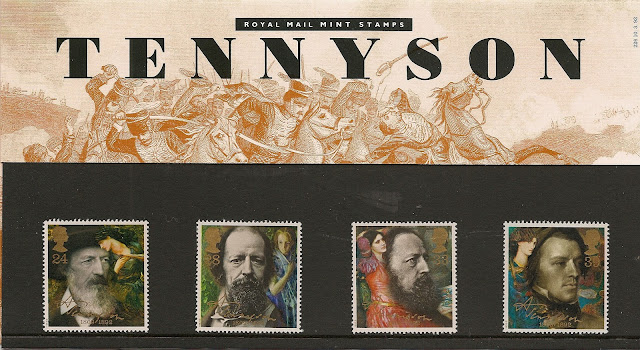 This presentation pack of stamps commemorates the centenary of the death of Alfred, Lord Tennyson in March 1992. Tennyson was appointed Poet Laureate after Wordsworth’s death in 1850, and remained so until his own death, the longest tenure of any laureate. 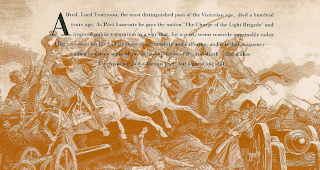 The pack depicts a scene from The Charge of the Light Brigade, one of Tennyson’s most famous poems, written to commemorate the Battle of Balaclava during the Crimean War. This was one of the first narrative poems I grew to love as a child, and even now a reading of it can bring chills. 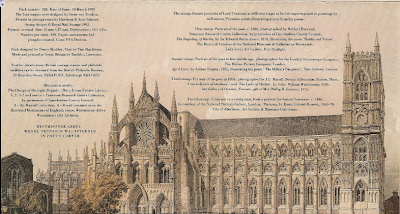 The pack also shows Westminster Abbey, where Tennyson was interred in Poet’s Corner.

Each of the stamps shows the poet at a different stage of his life and is beautifully illiustrated with scenes from paintings by well known Victorian artists.

The first stamp (24p) shows Tennyson in 1888, the painting is ‘The Beguiling of Merlin', by Edward Burne Jones, illustrating the poem ‘Merlin and Vivien’.

The second stamp (28p) is a portrait of Tennyson in 1856 and the painting is ‘April Love', by Arthur Hughes, illustrating 'The Miller’s Daughter’.

The third stamp (33p) is the poet in 1864 with a painting by John William Waterhouse illustrating the quote from Tennyson's wonderful poem 'The Lady of Shallot’ - “I am half sick of shadows, said the Lady of Shallot.”

The last stamp shows Tennyson in 1840 with the painting ‘Mariana’ by Dante Gabriel Rossetti. Tennyson’s poem of the same name has a subject drawn from Shakespeare’s 'Measure for Measure’ - “Mariana in the moated grange.”

I lived in Lincoln for a few years, first during my teacher training, and then when I married and had a young family, so I was also re-aquainted with the great man through his statue which stands in the grounds of Lincoln Cathedral.

I paid homage to Tennyson’s ‘Lady of Shallot’ with my own poem ‘Lost Cause’ which can be read here.

Thomas Eddison made a wax cylinder recording of Tennyson reading ‘The Charge of the Light Brigade’ and this clip rather spookily re-animates still photographs of the poet to make it appear that he is reading the poem. It’s strange but haunting, and if you stick with it and listen to the end (even though some of the words are lost), you’ll hear a knocking noise which is presumed to be Tennyson making the sound of horses’ hooves. This post was inspired by Sunday Stamps by Viridian’s Postcard Blog, where this week’s prompt was poets and poems.