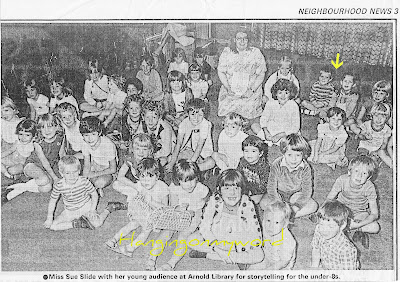 One of the themes for Sepia Saturday this week is ‘Library’, and luckily I had this newspaper clipping from about 1985, showing my son and daughter enjoying a storytelling session in Arnold Library, Nottingham, close to their grandparents’ home. We were probably visiting during a school holiday when these activities would be laid on to encourage children’s love of books and reading. My children received lots of encouragement at home and school, but for some children a visit to a lending library would be a rare treat. I asked my parents what they could remember about libraries in the 1920s and they said they were both regular visitors to their local library in Wilford Grove, Nottingham. Books were treasured in my Mum’s family, and her paternal grandfather William, was a great reader all his life. Mum remembers that he always had a stack of library books on the sideboard.

As a child in the 1960s I loved to vist my local libarary in Arnold. It was a much older building than the one in the picture above and I remember it had the inscription Carnegie Library carved above the door. The town had obviously been a beneficary of the charity set up by enlightened philanthropist Andrew Carnegie. In those days we were issued with library ‘tickets', and when you took the books of your choice to the desk, the librarian would take the card from the inside the book and insert it into one of your five tickets and into an indexed box. The book would duly be stamped, to be returned in two weeks’ time. I seem to recall that I would be back long before the two weeks was up, eager to make my next choice.

This week’s second theme was ‘Sleep’ and at first glance I thought the man in this picture had been overcome with tiredness and succumbed to a crafty ‘fortywinks’. I was pleased that I had found a picture to cover both themes in one. On closer inspection he appears to be either dead or dying, as his companion seems to be overcome with grief. In which case, I submit that it was probably Colonel Mustard with a spanner in the Library whodunnit. Don’t tell me you’ve never played Cluedo! The engraving, by Hetzel, is from the original '20,000 Leagues Under the Sea’, so make your own mind up who it is and what has happened. I resisted the urge to write a caption, but please don’t let it stop you from having a go.

Libraries like this one, on the right, often appear in old paintings, and I particularly like this example as it demonstrates the lengths, quite literally, to which a booklover will go to find the volume he is seeking.

He seems to suffer from the same affliction I have myself whenever I delve into my own home library. I start looking for a particular item and find myself sidetracked by some other tantalising morsel of information. 'The Bookworm' here depicted is engrossed in one book, whilst clasping another, with two further volumes, one wedged under his arm and another clasped between his knees. Does this sound familiar to anyone? I admire the fact that he thought to take a cloth with which to attack the dusty tomes. He clearly doesn’t have vertigo as the ladder is taller than it appears. Turning round and descending unscathed may prove to be tricky! 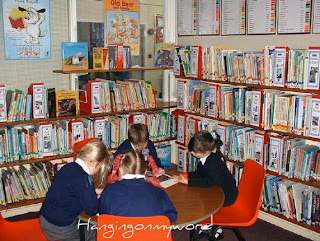 I started today’s post with children in a library, and to complete the circle, here is one I took in the library of one of my schools about ten years ago. Libraries in small schools tend to be multi-use but there are library sessions timetabled in every week. The old ticket system has gone, just as it has in public libraries, and the pupils self register on the computer and scan the barcodes of the books they are borrowing. This is the age of iPads and Kindles, but I don’t believe these will supersede real books. There will always be the magic of turning a printed page to see what happens next in a story, or discover some new fact. ‘Flicking through’ a book to skim through the pictures and text, or turning to the back cover to read the ‘blurb' and find out about the author, are all part of the library experience.

Please don’t try this in your local library!


For more ways to enjoy the library visit my bookloving friends over at Sepia Saturday before you go to sleep.