You’re in the Army Now

Seventy years ago this week (27th April) my mother received a letter from her employee, thanking her for informing him that she was joining the A.T.S. on May 1st 1942. 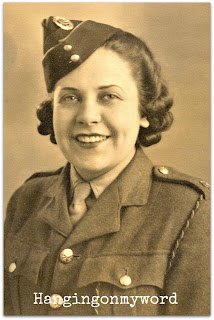 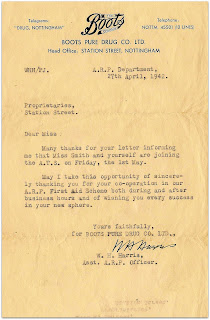 This was the Auxilliary Territorial Service, the women’s branch of the British Army during WW2. Originally, the The 1941 National Service Act required only unmarried women between 20-30 years of age to join one of the auxilliary services. Mum was due to be married in ten weeks time, but her call-up came through in May, so off she went to do her bit.

This Pathe News clip gives some insight into how it was for new conscripts (click on pic).

You may recall that Mum had been a keen First Aider, which is what Mr Harris was referring to in his letter of thanks. I wrote about this in 'First aid Post’. Mum was apparently given a choice of the services to join, and says later that had she joined the RAF, as a married woman, she would have been entitled to be posted to the same station as her husband. As it turned out, they often found themselves posted at opposite ends of the country. Naturally this was not very romantic for newly-weds, who would always be looking forward to the next 48-hour pass, with much of the precious time being spent in travelling. 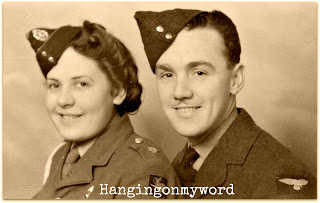 When they married on 11th July 1942 (this year is their 70th wedding Anniversary) Mum was 21 years, seven months old, Dad was just two days past his 21st birthday. They look so youthful in this photograph that it’s no wonder that when Mum arrived at her first posting people were curious about ‘the new kid’. Mum laughs when she tells this story, repeating the anecdote with relish: “You know that new kid? Well she’s married!” She was the first married woman to be posted to the 504 Battery in Nottingham, by her own admission, creating ‘quite a stir’. Mum had been at the War Office as a cypher operator for a short time, and recalls that she was there when the Fall of Tobruk came through.

In May 2001, the Nottingham Evening Post, ran a piece about the 504 Battery to accompany an old photograph, and asked if anyone had any memories. Mum duly responded and was delighted when her letter was published. 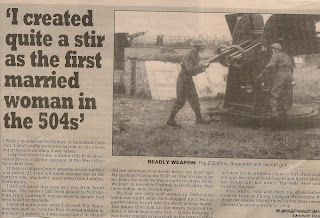 ”I was a member of 504 Battery at Gainsford Crescent. I don’t really recognise anyone in the photograph but it depends on when it was taken. I arrived there in the autumn 1942 from Kent, having been a cypher operator at the war Office for a short time. It was a compassionate posting as my mother was rather ill. I did not know anyone else in the battery who was local, most were from London, Durham etc. I did not know this area as I was from Trent Bridge. The battery had been posted to Nottingham from Lowestoft where several people had been killed in the raids.

I created quite a stir when I arrived. The Major was delighted as I was the first married woman in the battery (aged 21). I was conscripted in May (I did not volunteer) ten weeks before my marriage. My husband was in the RAF so I had to take a letter from the vicar so that I could be given leave. We later all moved to Ticknall in Derbyshire, then on to Ashby, near Scunthorpe.
We had one very cold winter in Derbyshire when one night some men chopped up a bed (or maybe more) to put into the stove to keep warm. The Major then had all the stoves removed for about a week from every hut - it was freezing. I was lucky enough to be a clerk in the battery office so I was warm whilst on duty - but often could not type because of dead fingers and had to plunge my hands into hot water.
Also, whilst I was with them, the whole battery went by train to Firing Camp at Weybourne for about two weeks. I think there’s a few more memories but I’m getting writer’s cramp."

Despite infrequent opportunities to be together my parents were determined to start a family as soon as possible, thereby ensuring that Mum would leave the army and Dad would know hat she was happily at home with her own Mum and Dad whilst he was away. Mum duly found herself pregnant and was all packed up, ready to leave. Dad had even managed to obtain a pass and had arrived to collect her. Sadly, Mum miscarried, and remembers the army doctor’s words, when she came round from her sedation; "You’re still in the army.” Dad was there to hear the words and I don’t think he ever forgave the callous way the news was delivered to them that they had lost their first baby. My brother wasn’t born until July 1944 so Mum was to serve for another two years.


May 1st is a date which means different things to different people, but for my Mum it was the day she joined the army. Alan has given us a lovely picture of Maypole Dancers as our Sepia Saturday prompt and I’m sure some of the contributors will be remembering more celebratory ways of marking May Day. Why not see for yourself?