From Red Roofs to Red Chairs

So much red in Sarajevo; the roofs glinting in the late afternoon sun belie the grief and pain still felt by many of its inhabitants. Twenty years ago this month the red roofs of Sarajevo, bathed in the first rays of Spring sunshine, would be witness to the beginnings of a bloody and savage war. Sarajevo became a city under siege, enduring four years of relentless shelling and sniper fire which was to claim so many lives and destroy whole families. Now the city is undergoing some renewal and those families are trying to rebuild their lives, in a country which is still deeply divided.
Where mortar shells exploded on the streets and civilians died, the scars which remained, were filled with red resin; a stark reminder of the blood shed at that spot. Deep indentations at the centre of impact, with smaller ‘petals’ surrounding them earned them the name of ‘Sarajevo Roses’. These flowers would never bloom though, like so many of the city’s children whose lives were cut short. Now a whole new generation is growing up in Sarajevo, babies are born in hope and their families pray fervently that they will never experience the same horrors of war.
On 6th April 2012, a ‘red river’ runs through Sarajevo’s main street, as plastic chairs are laid perfectly side by side, row upon row, stretching as far as the eye can see.11,541 chairs, one for each citizen killed in the war. Five hundred of those chairs are much smaller than the rest,  and here and there a flower or soft toy is placed, yet another poignant reminder of young lives lost. So much red in Sarajevo.

© Marilytn Brindley
The Siege of Sarajevo was the longest siege of a city since the Second World War. In addition to 11,541 dead, there were approximately 50,000 wounded. For 46 months, almost 400,000 people were left without electricity or running water. Approximately 329 shells hit the city every day. The war itself killed over 100,000 across Bosnia, creating two million refugees. 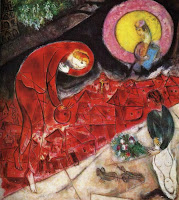 Taking part in 'The Mag’ courtesy of Tess Kincaid who provided the picture prompt of Marc Chagall's 'Red Roofs’.