I enjoy using Flickr Commons; posting my own work, following others and seeking out images to use as prompts for Sepia Saturday. This week, I’m just going to point you in the direction of one contributor. This is ‘The Past on Glass at Sutton Archives’ which comprises the work of David Knights-Whittome. His images were far from flickering; quite the opposite. 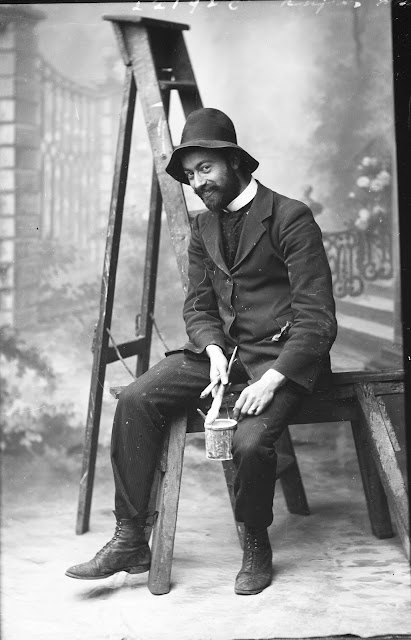 Knights-Whittome’s glass plate were discovered abandoned in the basement of an old shop and are now seeing the light of day for the first time in over one hundred years. The work of restoration has been undertaken by a team of volunteers and the results have been remarkable. If you want to know more about this self-taught photographer, who later gave up photography for politics, look at the blog, 'The Past on Glass; the Man Behind the Lens' where the stories of the collection’s discovery and the detective work that went on in identifying the subjects, can also be read. There is also a Facebook page which is regularly updated, and five very short You Tube films.

Well, I’m half in love with the handsome and playful-looking photographer depicted in his self-portraits. The one above and two others, show him in the process of seemingly painting backdrops, in front of which his sitters would pose. Sarah Elizabeth Draper (Bessie) also thought him quite a catch, as they were married in 1907 and had two sons together.

I’m also in love with Miss Pothecary's Dog, and Miss Russell’s Dog, two examples of the many pets Knights-Whittome photographed. The dogs must have been very well-behaved to sit so still and obediently. They look so real, that you feel as if you could reach out and stroke their fur. 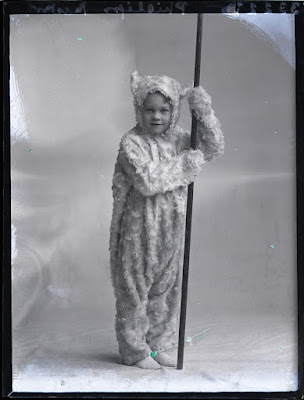 The same goes for the little boy in furry fancy dress, looking appealingly into DKW’s camera. I wonder who/what he was dressed up as, and what colour was that fur? Who was he? It’s thought that the identity of many of the sitters may never be known, but by spreading the word and giving the project some publicity, there’s always hope.


Like other photographers of the era, DKW photographed many of the soldiers and nurses of the First World War. In most little  known about the sitter, but in others a considerable amount of research has been done and some interesting stories have come to light. The Flickr album has many fine examples of this lost generation. Here are just two from 1915: Miss A.Smith and G.R.Waters Esq. 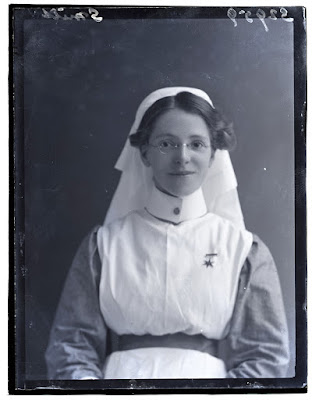 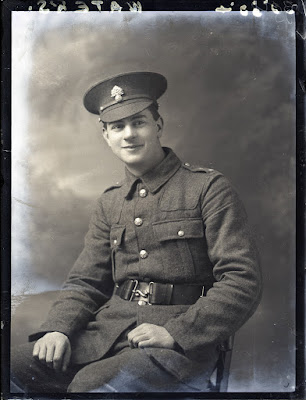 Knights-Whittome’s images also record royalty, country houses, schools and institutions, weddings and other events, fancy dress and costumes, domestic architecture and interiors as well as sporting events and equestrian/hunting scenes. I hope I’ve whetted your appetite to explore the archives yourself.

Our Sepia Saturday prompt image this week shows an itinerant photographer with examples of his craft, standing in front of an Ohio restaurant, perhaps hoping to make some sales from the passing diners. Knights-Whittome did not have to rely on passing trade in the street. It seems his subjects beat a path the doors of both his shops, eager to record their images for posterity. 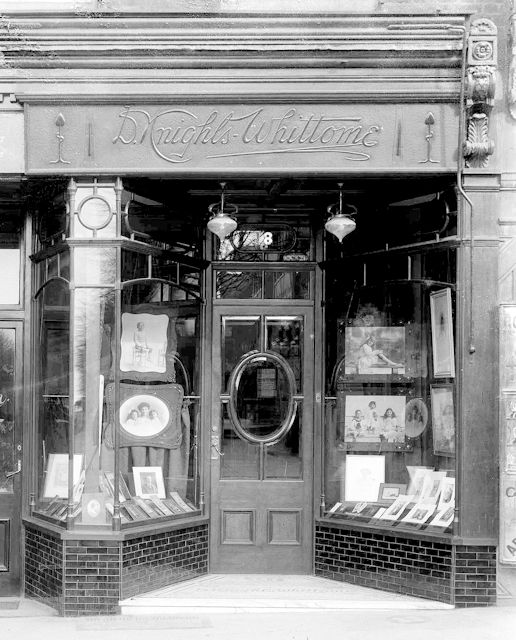 Sadly this shop no longer exists, but thanks to the works of the Sutton Archive on Flickr, with the Creative Commons Attribution-NonCommercial 2.0 Generic licence we are able to share his wonderful images.
Posted by Little Nell at 11:16