A Good Reason to Toast Again!

This is a re-post from 2011, but as relevant today as it was then. I'm linking to this week's Sepia Saturday.  Originally the subject was ‘Drink Up’ for the Thematic Photographic challenge.  Of course we don’t have to be urged twice! I managed to resist the temptation to post pictures of family and friends raising a glass or two to the camera. Instead, I offer you a pictorial souvenir of a visit last month to the Monumento al Campesino, here in Lanzarote (Monument to the Farmer). The brainchild of visionary César Manrique, it’s a celebration of the resilience of the local farmers and the significance of agricultural life on the island. It’s situated in the geographical centre of the island in the heart of the beautiful landscape of La Geria, famous for wine-making. The vines are grown in the harsh volcanic landscape, protected from the elements by zocos, pits dug into the ground and surrounded by stone walls; a method unique to Lanzarote.

There’s very little rainfall in Lanzarote, and historically the islanders relied on rainwater or from supplies imported by boat from other islands. Until the sea-water desalination system was set up in the 1960s, farmers had to be very canny about their system for harvesting the little rain which did fall.

The ‘living’ museum has artisans practising their crafts, and examples of wine-presses and other agricultural and domestic implements. There was a wonderful restaurant, where we had a couple of courses. We couldn’t eat any more because, as you can see, they were very filling!  This was my starter, which at home would have been enough to keep me going all day. Patatas Arrugadas (sometimes called ‘wrinkly potatoes’ because cooking method, using a lot of salt, makes the skins crinkle), served with the traditional red and green garlic sauces (Mojo Sauce), dried dates, and slices of Canarian ‘Curado and Semi-Curado’ goats cheeses. The surprise was the dark slices in the centre of the dish. made with gofio flour. These were quite sweet and reminded me of a cross between a marzipan or truffle sweetmeat. I tried them to be polite, but they would have been just too much. The chickpea and fish stew which followed, was delicious, but again, very filling, and had I known the portion size, I would definitely nott have ordered the starter. It always seems impolite to leave food, but I really couldn’t have eaten another mouthful.

The restaurant served a selection of local wines and of course, there was the  opportunity to purchase them in the shop. They were beautifully displayed, with information on each wine and the different vineyards and growers. It was difficult to resist and here’s one we managed to save from suffering the fate of the other bottle, which went very well with supper that night. Click on the link in the caption to learn more.

The poster bears the following the legend:

"Francisco has been fighting for his land for over 50 years. It is to his endeavours and the warmth of our land that we owe the excellence of our wines.”

“Wines with the denomination of origin Lanzarote. A good reason to toast”

So “Cheers everybody!” and when you’ve drained your glass, totter over to Writteninc. to see what other TP participants have come up with.

I’m also linking this post to Weekend Cooking, which is Beth Fish’s weekly meme for all things food-related: book, movie reviews, recipes, anecdotes, quotations and photographs are all welcome. I’ve learned a lot from my visits there. Go on have a go!

And I'm re-posting this eight years later as it is the perfect answer to this week's Sepia Saturday image prompt. A Paris wine bar, from the George Eastman Collection on Flickr Commons. It's titled  Marchand de vin rue Boyer by Eugène Atget  (French, 1857-1927) in about 1910-11. 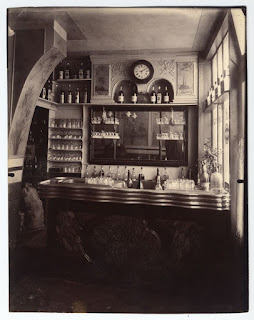