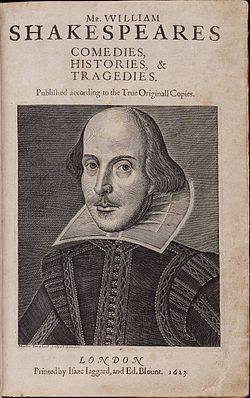 'Making an impression’ has several definitions; a graphic or pictorial representation of someone or something, the printing of a number of copies of a book, periodical or picture, for issue at the same time, are just two which fit my theme this week. Perhaps the best definition however is: a difference made by the action or presence of someone or something, and Mr Shakespeare certainly did that! This wood engraving*gives us some idea of how a printing house would have looked when his First Folio was being published in 1623. Although Shakespeare had been seven years dead, he was still making an impression.


The compositors, working near the window, are selecting individual letters from a case, and the printers in the foreground are applying the ink to the page before putting it into the press. Little had changed, in the intervening four hundred or so years, when this week’s Sepia Saturday prompt image was taken, probably some time in the middle of the Twentieth Century, although date and place is not known.** I remember being shown round the print room of what was then the Nottingham Evening Post, by a friend who worked there, in the late 1960s, and my memory is that it was very similar to the photograph. The progress in this digital age has been rapid since then. 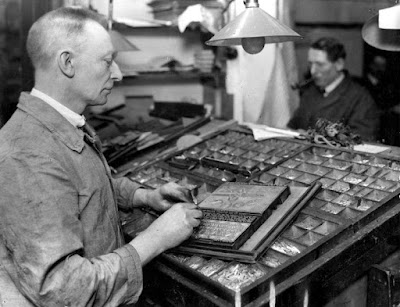 It didn’t seem to be all that different to the way I put together labels with my John Bull Printing Outfit, as a child. I had to choose each letter and put it in a tiny tray, which then got pressed onto an ink pad and then onto notepaper. That was when you would find out which letters you had placed the wrong way round!

In the early 1970s I worked as student, during my Summer Vacation, in Boots Printing Works in Nottingham.We produced everything, from the patient information leaflets, which accompanied medicines, to fliers, catalogues and diaries. My section wasn’t involved in typesetting; we collated the finished printed products.

One of my late father’s RAF friends, who had been demobbed before him, had gone to work at the Daily Express Printing Works, in Manchester, and at the end of 1946, sent my parents a Christmas letter, using the tools of his trade.  The bulk of the letter concerns family news and reminiscences of their time together in the RAF, but there are some interesting observations in this snippet. Dad kept the letter all his life, and I don’t think I’ll be getting his friend into trouble, seventy years later, to reproduce part of here. 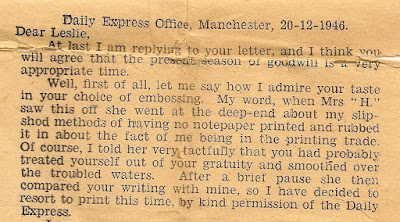 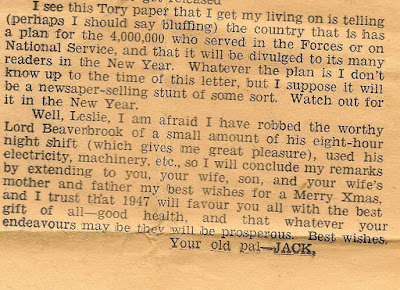 Back to William Shakespeare, whose Centenary we are celebrating this year. I’m currently following an online course through Warwick University, about Shakespeare and His World, and the background facts are fascinating. There is more to learn about the First Folio from The British Museum’s excellent online gallery, where you can view twelve images from the copy held by the museum. The engraver is Martin Droeshout and his version of Shakespeare is one which has more claims to authenticity than most.

Shakespeare’s friend and rival, Ben Jonson wrote the poem for the title page, with which I opened my post. It tells us that the graver (engraver) has made a good likeness of The Bard, but urges the reader to read the the book to capture the true essence of Shakespeare and his wit, something which the engraver would never be able to replicate.

To see what impressive photos and stories others have posted in response to prompt, visit Sepia Saturday.