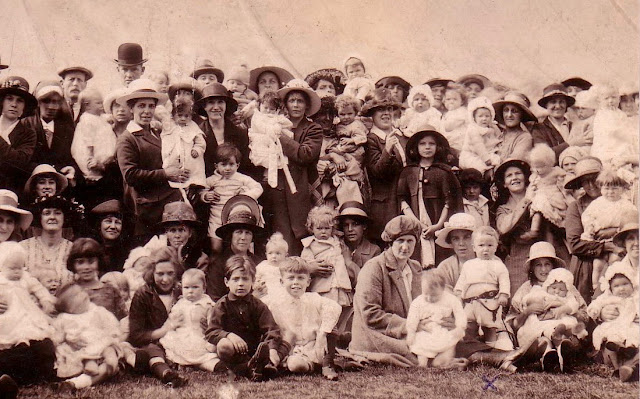 I have no information about the above photograph, other than the fact that X marks my Dad! There he is on the front row standing up proudly in his mother’s arms. His baby-reins have slipped a bit, but she has a good grip on him. Next to my grandmother is her sister-in-law, holding my Dad’s cousin, Betty, whose attention is caught by something on the ground.

There are more babies than older children in the picture, so one wonders if they were the reason for the get-together. Was it a beautiful baby competition at the local fete, or a Mothers and Toddlers outing of some sort. There aren’t many men either, which also makes one ponder. This is c1921/2, so not all that long after the First World War; returning servicemen would have lost little time in settling down and starting, or expanding, their families.

I don’t have the original photograph, so I can’t make it any more high definition, but it’s certainly worth enlarging and perusing some of the expressions on the babies’ faces. 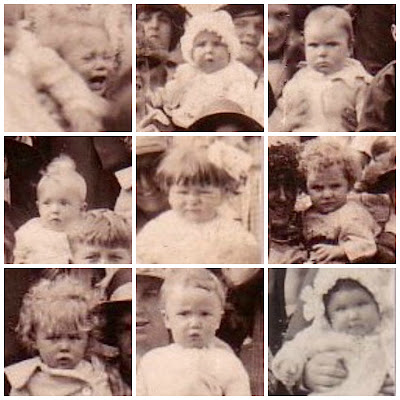 Sepia Saturday prompt image this week is from a 1938 Baby Show in Kent. Three infants are perched on table, with their mothers standing behind. The one in the middle is holding onto a hairbrush, which is coveted by the one on the right, whilst the third baby looks confused by the altercation that is taking place. The mums are amused anyway. In my photo, there is the inevitable crying baby as well, more than one looks confused, including my Dad, and a few could make use of that hairbrush! 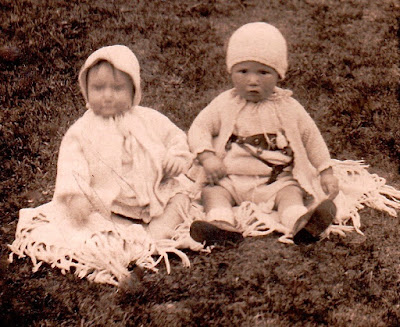 It’s very likely that this photo was taken the same day. Dad now wears a ‘beanie’, but still looks bemused, and Betty, who is now in her bonnet, has gone all blurry.

Dad and Betty have long since left us, as I imagine have most of those infants, their siblings, and certainly their mothers. One can’t help wondering what the future held for them. One or two would sadly not have made it past childhood, and the next war would have probably taken care of a few more. Others, like my Dad, would have lived long and happy lives, and had babies of their own.

Whilst we’re still celebrating Shakespeare’s centenary, did you know that the artist Romney imagined ‘The Infant Shakespeare, Attended by Nature and The Passions’?  Here is the engraving made from his painting, by Benjamin Smith for 'The Boydell Shakespeare Prints’. 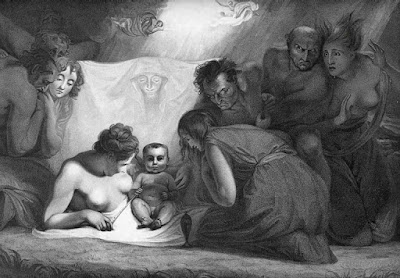