This post has been updated after its original publication to include information kindly supplied by Robin Macey of Nottingham and Derby Hot Air Balloon Club.  I’m delighted to give Mr Macey permission to reproduce the photo below to use in his illustrated lectures. Dad would have been very pleased. If any Nottingham readers have old photographs from past ballooning events in and around Nottingham, I’m sure Mr Macey would be pleased to hear about them 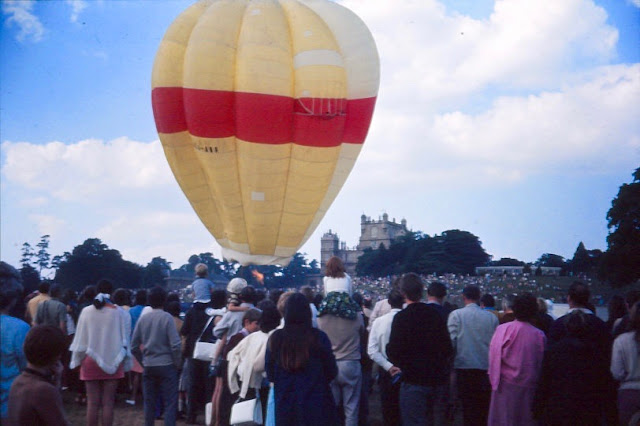 This is a scene captured by my father at Wollaton Park, Nottingham in 1970. There were no clues on the slide when I scanned it, but I found an article from the ‘Nottingham Post’ which I thought had helped me to identify the year. I recognised Wollaton Hall, a famous Nottingham landmark, and the park where I spent many happy hours as a child so this was a very good clue.

The article 'The Day Balloon Festival Filled Our Skies’ was actually published in 2009 in the ‘Bygones’ section of the Post. Further searches revealed a special balloon mail envelope issued to mark the the very 'First British Balloon Festival’ at Castle Howard, Yorkshire, in 1976, so I believed (mistakenly, as it later transpired) that Dad’s picture was recording only the third year of the festival being held. In the Bygones article Robin Macey of the Nottingham Balloon Club recalled the sport’s last major event in the city (up to the time when the article was published). In the late 1990s the City Council started to introduce red tape and to charge for the balloonists to launch in the park. As a result small private balloons stopped using it. The 1979 festival actually lasted a whole week and forty balloons took part, so it’s easy to see why Mr Macey said they filled the skies. 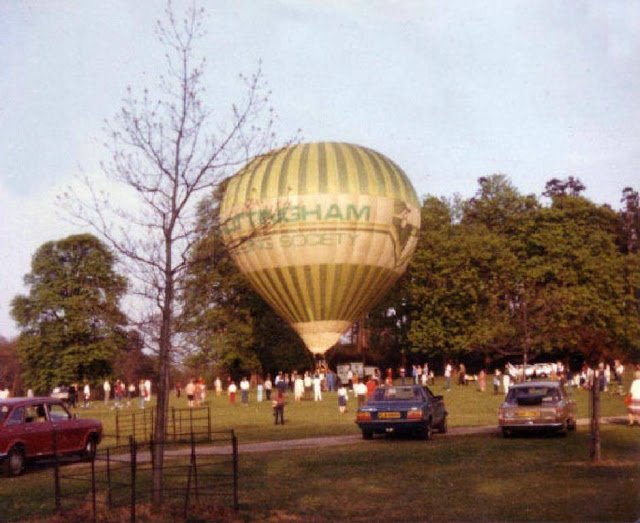 This picture by David Myers,** was taken at the park some time in the 1980s. The Council charges remain in place but special occasions, such as Armed Forces Day,  allowed organisers to pay a fee to use the whole park and therefore launch balloons without any extra charges. The RAF balloon was pictured at Wollaton Park on Armed Forces Day 2009 and pictures by Andy Jamieson.*** It’s not known whether it was actually launched, or simply tethered. 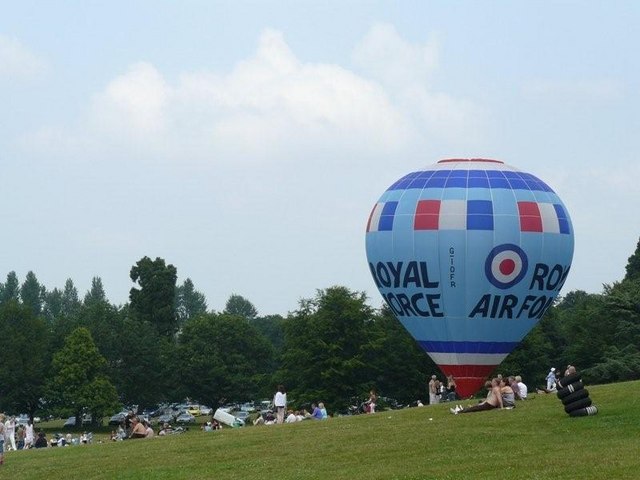 This article on the Easy Balloons blog talks of a forthcoming event in October 2013 when balloons were again expected to launch from the park for triple celebration of the first balloon flight from Nottingham in 1813, the 25th Anniversary of the East Midland Balloon Group and the 50th Anniversary of Anthony Smith’s flight from Nottingham Castle. Sadly, on the day the weather prevented the balloons from launching, even though the organisers were prepared to pay the fee to cover the special launch. The participants must have felt quite deflated but consoled themselves with a special celebration luncheon in Wollaton Hall itself. That must have been an uplifting experience.

Join us the  this week’s Sepia Saturday Balloon  Club for more posts inspired by the image below.

* Robin Macey believes that the balloon in my father’s picture is registration G-AXJA, later sold to a buyer in Ireland and changed its registration to EI-ANP