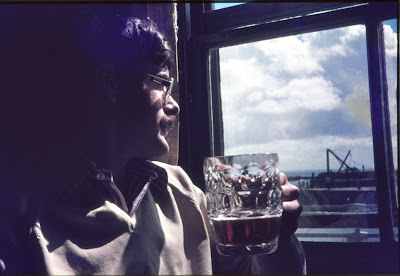 One of the themes on offer in this week's Sepia Saturday is 'windows'. I thought I'd pretty much covered this in a previous post; 'But Soft, What Light...?'. But then, flicking through the albums I came upon a few missed opportunities. I discovered three windows which all have a claim to fame in some way. The above picture of my husband, with his holiday pint in hand, was taken in 1977 in the quaintly named Cornish village of Mousehole, looking out of the window of the harbourside Ship Inn. Four years after this picture was taken the landlord of the pub died along with fellow crew members in the famous Penlee Lifeboat disaster. The village (pronounced Mowzel) is also famous for visits from the poet Dylan Thomas, who described it as 'the loveliest village in England' and for being the home of the last native Cornish speaker. 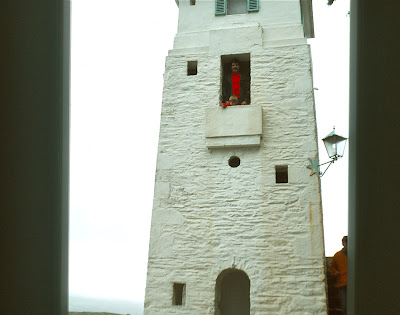 Here is my husband again, with our daughter, in 1979, looking down from one of the tower windows in another famous seaside village. This one is Portmeirion in Wales, which is famous primarily for being the setting of 'The Prisoner' TV series, now a cult classic. Over the years it has been visited by many famous musicians and writers, including Noel Coward, who wrote 'Blithe Spirit' there. 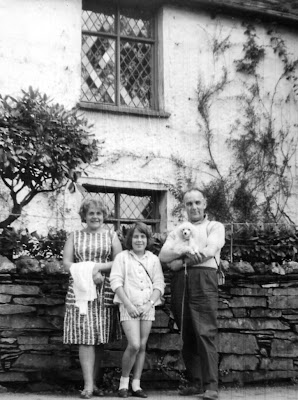 The final picture is me aged about ten, with my parents, outside Dove Cottage, Grasmere in The Lake District. This was the home of the poet William Wordsworth and his sister from 1799 - 1808. Here he wrote many of his famous poems, and his sister Dorothy kept her famous journals. If you click on the link you'll see that at the window immediately behind our heads is now obscured by shrubbery. The bedroom window in my own picture appears to have faces staring out, and so would fit in with the Sepia Saturday theme. However, when the picture is enlarged the 'faces' seem to be no more than reflections or tricks of the light. If they're faces it would be lovely to think that they were the ghosts of William and Dorothy, but a more likely explanation is that they were just holidaymakers like us.

It seems I can't resist (unwittingly) making pilgrimages to the sources of inspiration for famous writers and poets. Sadly the genius of Coward, Wordsworth and Thomas didn't rub off on me, but perhaps a little bit of the magic did and gave me my lifelong love or poetry and wit.

Why not join us at Sepia Saturday and see what windows of opportunty other contributors found.