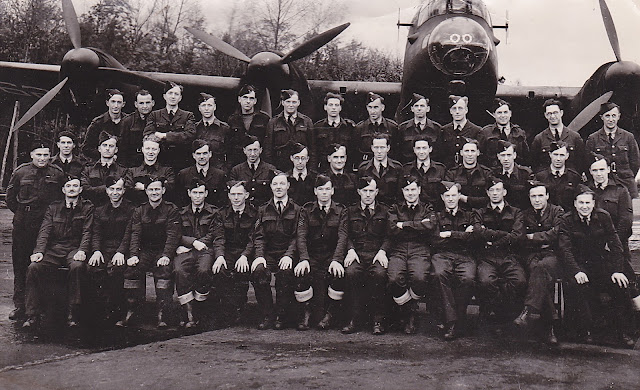 The above group photograph includes my father (second row, end right), taken whilst serving with the RAF during WWII. Dad had enlisted in 1940, just after his nineteenth birthday and was trained as a flight mechanic, one of the unsung ground crew responsible for keeping the aircraft airworthy. The picture was taken in 1943 when Dad was stationed at RAF Swinderby in Lincolnshire. He'd previously worked on the Spitfires of 609 Squadron at RAF Biggin Hill, when the Battle of Britain was its height. Ground crew checked all aircraft on their return for damage, then they would re-fuel, re-arm, test engines, radio and oxygen supplies in the shortest possible time and using a rapid and well-rehearsed drill. The ground crew worked as a team with each man playing a vital part and enabling the whole squadron to be serviced within ten minutes. Aircraft were lost of course, and replacement aircraft would arrive and have to be made combat-ready by the ground crew.*  I wrote about the Spitfire and Dad's connection with it in a previous post, Their Finest Hour. 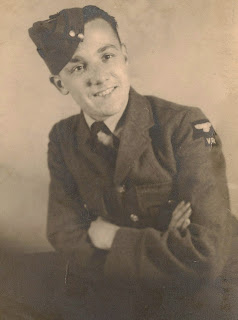 Dad next went to Coastal Command at RAF Silloth, and to Thornaby-on-Tees in NorthYorkshire from where he was transferred to RAF Swinderby, 1660 Heavy Conversion Unit to work mainly on Avro Lancasters (as above), but also with Halifaxes and Stirlings. The hours were long and hard as the country prepared for 'the second front' and the harsh winter of 1944 saw all hands deployed clearing the runways and dispersals of snow for days on end, as flying was abandoned. Dad remained at Swinderby until he was 'demobbed' in April 1946.

Sepia Saturday this week has a photo prompt of a group of Crimean War soldiers wearing their army caps at  a jaunty angle. It reminded me of the group portrait above, with Dad and his friends wearing their regulation forage caps at that same angle, as they were meant to be of course. They were also known as 'chip bag hats' as their shape resembled the greaseproof bag used to hold your portion of chips when you bought them from the fish and chop shop. Dad is 91 years old now, but he still has the very cap he is wearing in this portrait. the style of the 'side-hat' hadn't changed much by the time my husband was serving in the RAF in the seventies and eighties, although he  and his fellow officers mostly wore a peaked hat or, when in field conditions, a  beret. Co-incidentally he too was to have a connection with the Spitfires and Lancasters, which along with the Hurricane, made up the prestigious Battle of Britain Memorial Flight. The BBMF came under his engineering responsibilities whilst we were stationed at RAF Coningsby.

Join others at Sepia Saturday this week to see where the picture of jolly, jaunty sergeants led them.

*With thanks to my brother, who has documented this part of Dad's life for the family memoirs.
Posted by Little Nell at 11:06