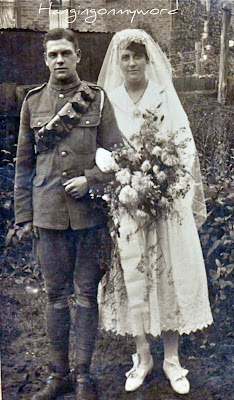 So goes the traditional saying which itemises the five things a bride should have on her wedding day for luck. Historically shoes have been associated with wedding customs for centuries. Anglo Saxon husbands would hit their new wife over the head (symbolically one hopes) to establish authority, whilst the custom of tying shoes to the back of the bridal car originated in Tudor times, when a direct hit by a guest on the couple’s carriage signified good luck! The rhyme above is thought to be Victorian, and the sixpence in the shoe was to bring financial prosperity. Here is a wedding photograph of my grandparents in 1918. You can read more about this in ‘Wedding Day Delay’. The shoes she was wearing would of course have been white, and the ribbon was most likely attached by my thrifty grandmother, so that afterwards the shoes could be used for everyday wear, possibly after dyeing them a more servicable dark colour (though wouldn’t it be lovely if she dyed them red?). I don’t know whether she had a silver sixpence in her shoe, but if she did, the charm didn’t work, as all their lives my grandparents had to watch their finances very carefully.

Queen Elizabeth I never married so there is no need to speculate about the footwear she would have chosen for the great day. However, there is a story that her shoes (colour unspecified, but let’s say ‘red’ for the sake of continuity) were saved from spoiling in a muddy puddle, by the gallant act of Sir Walter Raleigh (1554-1618), who removed his cloak and laid it in her path. This always struck me as a rather silly thing to do, and the story paints Raleigh as something of a show-off, overshadowing his success as a writer, poet, soldier, courtier, spy, gardener, historian, religious enquirer, MP and explorer.  It was a grand gesture but it didn’t save him from the executioner’s axe many years later. By then, King James I was on the throne, and he was not one to be so easily swayed. The legendary act is commemorated on a pub sign in Devon. This should please Alan, who gave us the shoe prompt for this week’s Sepia Saturday, but is also an aficionado of pub signs, which he demonstrates on his own blog

I would love to have had the feet and figure to carry off a pair of red shoes, preferably shiny and high-heeled; not like the Ruby Slippers worn by Dorothy in 'The Wizard of Oz', nor those in Hans Christian Anderson's fairytale, 'The Red Shoes', whose character, Karen, suffered a dreadful fate whilst wearing them. Nor  do I crave those worn by Moira Shearer in the film, 'The Red Shoes', the wearing of which also led to obsessive behaviour and an untimely death. Kate Bush was inspired by the film too and wrote a song and an album by the same name. My Mother tells me that when she was at school in the 1920s she acted the part of Karen in a class reading of the tale. When she kicked off the hateful shoes, she was a little over-zealous and one flew through the open classroom window onto the street below.

Red shoes certainly get you noticed, and the eye is immediately drawn to them.The little boy on the left was painted in 1810, and this work now hangs in the Stadtmuseum, Berlin. The artist is unknown, but the title is 'Boy With Drum'. the drum stands out almost three-dimensionally from the picture, due to the bright colours, in contrast to the child’s white dress, but you can’t help noticing the little red shoes he’s wearing too. Without these the painting would not be quite so interesting.

I've never been a follower of shoe fashion, and have usually gone for comfort over style; I feel more kinship with 'The Old Woman Who Lived in a Shoe' (certainly in my head teacher days), than with Carrie, in 'Sex in the City'. My daughter, however, has always loved shoes; from the time she could squeeze her toddler feet into my high-heels in dressing-up games, she was smitten. Here she accesorises her red shoes with rather snazzy stripey leg warmers which were all the rage in the eighties. Helping Daddy in the garden needs wellington boots, and there’s only one colour for wellies when you’re only three. 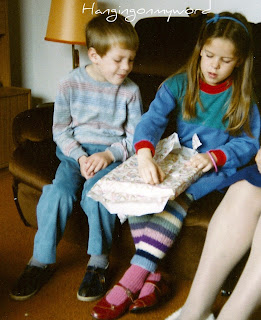 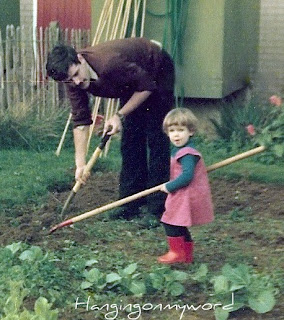 The title of this post is borrowed from the 2005 film of that name, based on the book by Jennifer Weiner. The film is both funny and moving and is notable for showcasing three wonderful poems, read by one of the characters, played by Cameron Diaz. I kept thinking about my grandmother’s wedding shoes and I thought she would appreciate a touch of colour to enliven the sepia, so here’s ‘In Her Red Shoes’ especially for Gran. 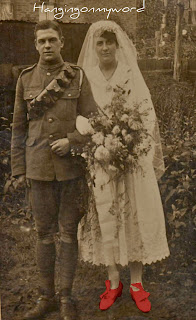 Now, squeeze your toes into your dancing shoes and hot-foot it over to Sepia Saturday to see what other participants have come up with.