To Say Nothing of The Dog 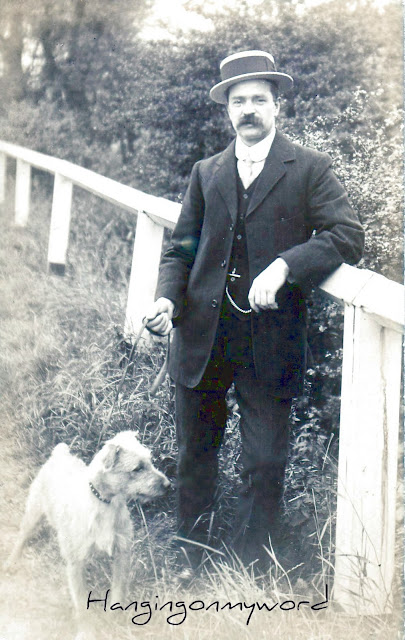 The dapper gentleman in the above photograph is my great-grandfather William (1867-1952) with his dog, Don, a Welsh Terrier. This picture has only recently come into my possession and is the only one of two, to my knowledge where a dog features in a sepia family photograph. I asked my mother what she knew and Mum volunteered the dog’s name, and told me that on a Sunday morning William would take a bar of soap and join other men, bathing their dogs in the nearby river at Trent Bridge. For some reason the above picture of William in his straw boater makes me think of Jerome K Jerome’s very funny book; ‘Three Men in a Boat -To say nothing of the Dog’ (to give it its full title). 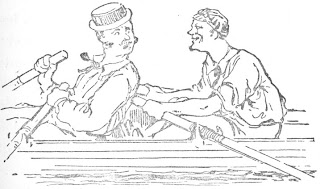 I have a copy of that book, bought by my father for my mother on her 21st birthday and grew up reading and re-reading the hilarious escapades of the four protagonists. The naughty dog in Jerome’s book is called Montmorency, a Fox Terrier .


“To look at Montmorency you would imagine that he was an angel sent upon the earth, for some reason withheld from mankind, in the shape of a small fox terrier. There is a sort of Oh-what-a-wicked-world-this-is-and-how-I-wish-I-could-do-something-to-make-it-better-and-nobler expression about Montmorency that has been known to bring the tears into the eyes of pious old ladies and gentlemen.”

The book is out of copyright and there are numerous versions on the web, but for a very funny description of a dog creating havoc with the packing, scroll to the end of Chapter IV, or just google ‘the awful behaviour of Montmorency’.

I haven’t owned a dog since I was a child, but I do have a fondness for them, especially in sepia. I don’t collect postcards, but I do have published books full of old photographs and cards, and six of them are about dogs! 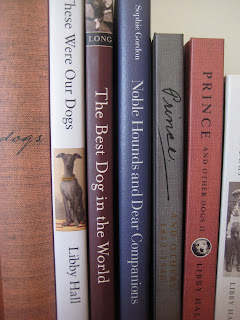 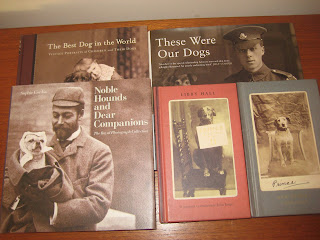 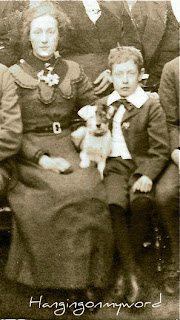 All are full of wonderful images of people  with their dogs. ‘Prince and other Dogs’ by Libby Hall was the one which started it all off.

My second photograph is of my paternal grandfather, Sam, in 1902. The only one we have of him as a boy. Sitting next to him is his big sister, Sarah, known by my Dad as Aunt Cis; she was the sweetshop lady in my post, 'Open All Hours’. We don’t know anything about the dog, but he does have a look of Montmorency about him. He’s looking quizically at the camera and I bet he’s contemplating mischief of some sort, which is why Sam is holding on to him.

Alan gave us a fine photo prompt entitled ‘A Man With a Dog’  for this week’s Sepia Saturday challenge. I immediately thought of the old BBC TV series; One Man and His Dog, about sheepdog trials, which was popular with viewers for years. People were fascinated by the trust and teamwork between the shepherd and his dog. I resisted the urge to use this as a title for my post, but I’m sure someone else will do so.

I have a weakness for scallywags like Montmorency. Whilst a well-behaved dog is a delight I’m sure, there’s something endearing about a dog who is a bit of a rogue. William Shakespeare wrote a wonderful monologue for Launce, the clown in 'Two Gentlemen of Verona’, where he talks of the trouble his dog Crab has got himself and his master into, as Launce sought to cover up Crab’s misdeeds.

Here’s another little rascal, called Buster, and his master, Keith, who was my old window cleaner about twelve years ago. Buster accompanied Keith on his rounds, and when he got tired he’d have a nap in Keith’s Reliant Robin parked outside. Buster went everywhere with his master, I even spotted him in town one New Year’s Eve tucked up inside Keith’s coat, with just his nose peeping out, enjoying the fireworks. 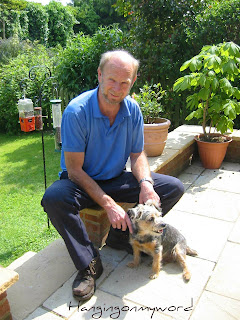 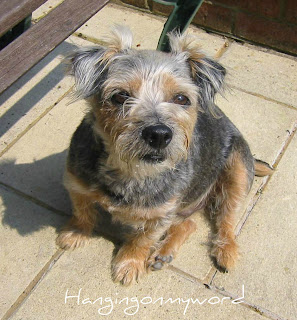 I haven’t seen them for over ten years and, as Buster was already well past puppyhood, I imagine he’s no longer with us. Montmorency, Don, Crab, Buster and Granddad Sam’s little rascal, all faithful companions who brought a smile to the face. And here is Kim my childhood pet. He was only little but was very brave. he liked to sit on the windowsill and bark at any perceived threat - from safely behind the glass- and one day he barked  so hard he fell off and broke his leg!

Canine Conversation
"Engraved on the collar of the dog which I gave to His Royal Highness.” - Alexander Pope
I am His Majesty’s dog at Kew,
Pray tell me Sir whose dog are you?

Repy to the above query: (as imagined by me)
I am the dog at ’24’
Where I have my family under my paw.
I sit in the window and keep an eye
On any strangers passing by.

For more stories and pictures, grab the lead and walk the dog over to Sepia Saturday.

Little Nell
I am a retired primary school headteacher who moved to Lanzarote for the year-round sunshine, the amazing landscape and the slower pace of life (Mañana really means mañana here). I have been married for 44 years, have a son and daughter and 11 year-old twin grandchildren. I relish the time to do what I like at last; get up when I want to, go to bed when I want to. Of course there are things I miss about England: the song of the robin and blackbird in my garden and watching the blue-tits nesting, the theatre, the art galleries, the cathedrals, but I get my fix on the visits back to Blighty and travels further afield. This is my home now, in every sense.