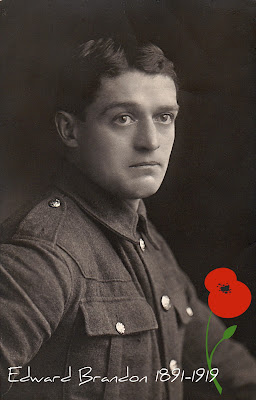 The Hundred Days Offensive is the name given to a series of battles leading to the end of the First World War. As this is the hundredth edition of Sepia Saturday, Alan gave us the figure 100 as a prompt for this week’s post. The day after this milestone edition is Remembrance Sunday, when we vow never to forget the fallen of the Great War, and the many men and women who have died in subsequent conflicts. The significance of the timing was too strong to ignore.
There is a wealth of information about the Hundred Days Offensive on the internet, so I won’t repeat it here. Suffice to say that it brought to a close four years of bitter fighting and an end to human misery on a scale never before known. Families were torn apart, and my grandmother’s was no exception. I had three great uncles who died in the First World War, and in ‘Dulce et decorum est’ I told the story of  the middle one, George.
In my previous post I related how my family and I undertook something of a pilgrimage in April 1984, whilst stationed in Germany with the Royal Air Force. At the beginning of that trip we went first to Caudry British Cemetery in Nord, France where we knew my Grandmother’s older brother Edward was buried.

We know very little about him, except that he was adored by my Gran. He was five years old when she was born, and we can imagine that he would have been very much the big brother to her and his younger siblings. Because he was unmarried there were no children and grandchildren curious to find more about him, and so he became something of a shadowy figure. We know even less about him than George, but since my initial research it has become easier to search records and I hope that in the future I will be able to fill in some of the gaps so that the shadow begins to take a more human form.
We have only one photo of him, and written on the back is the name and address of his mother, alongside the inscription ‘Edward Brandon. Eyes brown. Hair black.’ He looks somewhat apprehensive, with huge soulful eyes  and I always thought the photo was of a sad young man. My Gran used to say he was the quiet one of the family. There is no date, but if it was taken post-1916, he would already have lost two brothers and would be wondering about his own chances of surviving the war. Enough to make anyone look solemn.
We know that Edward was a private in the Royal Army Service Corps attached to 84th Army Brigade, Royal Field Artillery.
“The ASC was one of the Cinderella units of the Western Front and it received little in the way of commendation, or entries, in the official reports of the Great War. Although the 200,000+ officers and men of the ASC who served on the Western Front could not normally be considered to be combat soldiers, many were exposed daily to the capricious dangers of the battlefield as they moved around it performing their varied duties of supplying and transporting the fighting man.” ( Dr David Payne, The British Army Service Corps on the Western Front, in The Great War. The Western Front Association website)
Perhaps this suited the quiet, young man, who would serve his country not as a combat soldier, but as a member of a large support force which kept the army supplied with vital equipment and provisions.We don’t know where he spent the bulk of the war, but it would appear that he ended up with his unit in those closing days at Caudry, a town 10 kilometres east of Cambrai. Caudry had been in German hands for most of the war until October 1918 when it was the base for successive clearing stations.
My Great Auntie Mary told me in a letter in 1984, that she remembers Edward coming home on leave and that when he returned to France he was ill. Perhaps it was the beginnings of Spanish Influenza, which was to have such a devastating effect on both military and civilian populations at this time. She believed that, shortly after his return to his unit, he succumbed to pneumonia and died on February 28th 1919. She also had a photograph of the original grave with this date inscribed upon it.
Over 700 casualties are commemorated at Caudry British Cemetery, but with help from the Commonwealth War Graves Commission we were able to find Edward’s grave and pay our respects.  My mother, who never knew her great-uncle, was able to write in the Book of Remembrance on her own mother’s behalf.

His great-great niece, my six-year old daughter, spontaneously laid some daisies she had picked, in front of the headstone. Even my four-year old son stood quietly and reverently by, as if aware of the emotional impact of the moment.
The picture shows Edward’s grave at the time of our visit. The date is different to that given by my aunt. The mystery deepens when we find that according to the Commonwealth War Graves Commission he died on 21st October 1919. The Ministry of Defence helpfully carried out an extensive search but told me that they lost many records in enemy air action in 1940. They did find Edward on the Medal Rolls however, where the date of February 21st was given but this time two years earlier in 1917. I do hope that this was a typing error as it confuses matters even more. I’m inclined to go with his sister’s date, as it would have been etched on the collective memory of his immediate family. I’m assuming they would have received the standard telegram informing them of his death and on each anniversary he would have been remembered by his parents and siblings. The Historical Secretary at the Royal Artillery Institution agreed with me that October 1919 was unlikely as there were so few troops remaining in France at that time.
The Regimental Headquarters in Aldershot told me that Edward’s name did not appear in their lists of members of the Royal Army Service Corps who had died in the First World War and the Imperial War Museum said that in the Official publication ‘Soldiers Died in the Great War', Edward is not listed. This would support the fact that he died after the armistice.
In that final hundred days Edward was no doubt carrying out his duties in France and would have been anticipating a return to Blighty as soon as the army allowed. Edward may be an enigma now, but back in 1919 he was a much loved son and brother. As the oldest boy he would have been the one his father  would have shared a pint with at the pub when he was home on leave, putting the world to rights, or discussing a game of football. His mother would have relied on him to help keep his nine siblings in check. The six girls would all have looked up to him, and the one remaining son, little Charlie who was only eight years old, would have turned to him for brotherly advice. On the hundredth day, the armistice was signed. At 11.00. o’clock on the eleventh day of the eleventh month, the thundering roar of the big guns ceased, the last shot was fired, and Edward’s family would have breathed a sigh of relief to think that having lost two sons, their eldest had been spared. Instead we can only imagine the heartbreak that telegram must have brought. So many false hopes raised, so many dreams for the future lost. It is my privilege to honour his memory, and ensure that he is never forgotten.