Please excuse the punning title; I’m afraid I found it hard to resist! This ‘post’ is mostly about ‘First Aid’ and the Red Cross in WW2, so if you want to see what a ‘First Aid Post’ looked like then, click here. 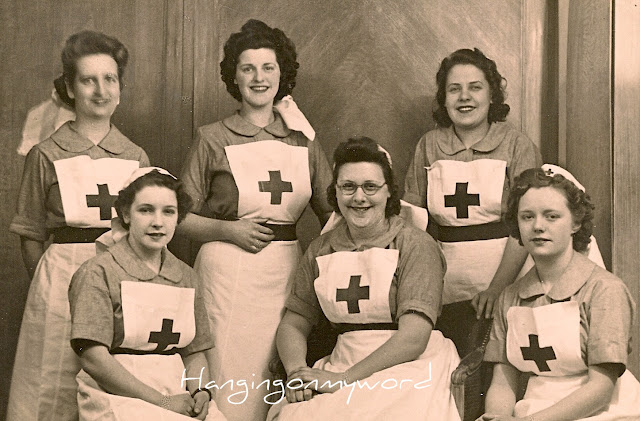 When I saw the nurse in Alan’s photo-prompt for this week’s Sepia Saturday, I knew I had just the picture. This is my Mum (back, right), aged about nineteen or twenty, in 1939/40 when she was in the Red Cross detachment of Boots Co.Ltd, Nottingham. She volunteered with some of her friends from the office and they would work at the local Nottingham hospitals on weekend mornings; the Children’s on Saturday and the General on Sunday. 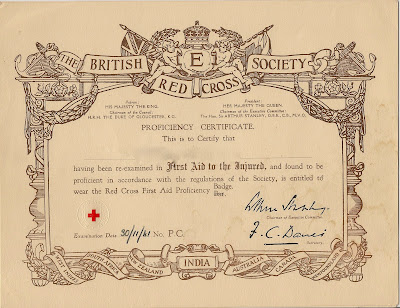 This is one of Mum’s many certificates, all beautifully engraved in exactly the same way. She first passed the course in 1939 and then, as the certificate states, was re-examined a year later to make sure that she was still proficient. Apparently she practised her bandaging techniques on my grandmother! She also had a Home Nursing certificate, and one for Anti-Gas Training. The latter was deemed necessary as throughout the 1930s the Red Cross was gearing up for war. Mum also attended courses, lectures and demonstrations and then had to show that she had absorbed all the knowledge and techniques. The lectures were given by Dr.Swann and apparently all the girls were half in love with him, as he was so handsome and distinguished looking. Mum obviously didn’t let it distract her too much; I hope the good doctor was able to concentrate with several pairs of adoring eyes watching his demonstrations! 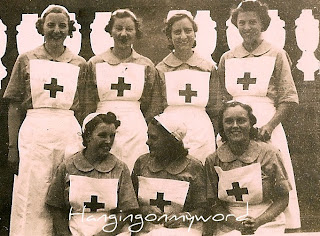 In this picture Mum is the middle, and she’s not paying attention to the cameraman, but is chatting to her friend Sybil instead, probably about the many charms of Dr Swann.This link will take you to the Flickr gallery where you can see some of the Red Cross volunteers in action during the war. This link will take you to a short clip on British Pathe, from 1939, about the same time as Mum’s photo was taken. The clip is accompanied by a jaunty commentary and equally jolly music which seemed to jar somewhat when the voiceover warned that  ‘many thousands would go through much physical suffering’ in the months or years ahead.


Mum’s shirt was pale blue and she also recalls that the headress was very difficult to keep in place without hairgrips (visible in the photo). When I was a little girl, she made me an outfit just like the one in the picture, sewing a red ribbon cross onto a white handkerchief for the bib of the apron. I remember I had a case with toy medical instruments in it. 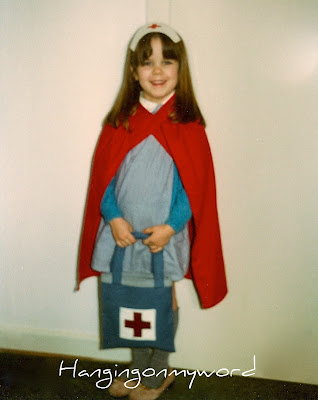 There’s no picture of me putting it to use, but I did find one of my daughter, carrying on the family tradition. Here she is around 1982. Note the grey socks and gold slippers, which I don’t think were regulation in 1982.

Join me on my Ward Rounds to see what other Sepia Saturday  participants have come up with from the prompt below. “Nurse! The Screens!”