The Somme Day One

Tomorrow marks one hundred years since the beginning of the great Somme offensive, which was to claim so many lives. My own great uncle lost his life there in September 1916, and I wrote about this in Dulce et Decorum Est. Here, I am simply going to choose a few words and images, provided by others, and let them speak for themselves, as a memorial to the many who died. The First Day of the Somme was the opening day of the Battle of Albert. 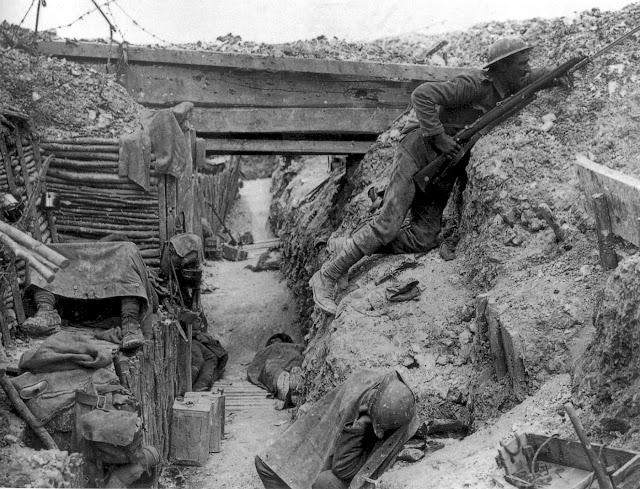 This image was captioned, ‘British trench near the Albert-Bapaume road at Ovillers-la-Boisselle, July 1916, during the Battle of the Somme’. It shows a German trench, occupied by British soldiers of A Company, 11th Battalion, The Cheshire Regiment.

From Albert to Bapaume

Lonely and bare and desolate,Stretches of muddy filtered green,A silence half articulateOf all that those dumb eyes have seen.A battered trench, a tree with boughsSmutted and black with smoke and fire,A solitary ruined house,A crumpled mass of rusty wire.And scarlet by each ragged fenLong scattered ranks of poppies lay,As though the blood of the dead menHad not been wholly washed away.
Alec Waugh 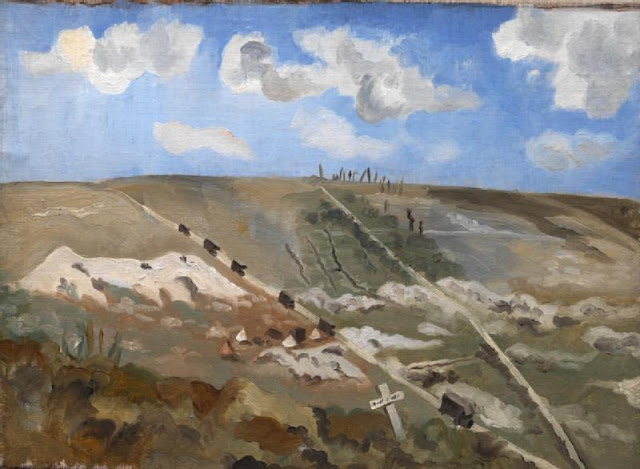 The image, by Richard Carline depicts the devastation by 1918, of a section of the Albert-Bapaume Road, and the surrounding landscape. A convoy of military vehicles drive along the bomb-damaged road, beside which are a few bell-tents. In the foreground is a grave, marked by a white wooden cross.

A time will certainly come in these rich vales
When a ploughman slicing open the soil
Will crunch through rusting spears, or strike
A headless iron helmet with his spade,
Or stare, wordless, at the harvest of raw bones
He exhumes from the earth’s unmarked grave.
(An extract from ‘Still', a new poem by Simon Armitage)

A contribution to Sepia Saturday.
Posted by Little Nell at 09:17