Searching through my box of postcards, in the hope of finding something that would match this week’s Sepia Saturday prompt, I was focusing on bridges, boats and flags, preferably together. I had already featured them separately, and there was nothing in the family album that would suit. I came across this black and white postcard written by my mother to her parents, fifty-four years ago; it was too interesting to discard, despite the lack of a bridge.

In itself the postcard is not very exciting but it does have the requisite boat and oars, though no oarsmen. The only action is a group of fishermen hauling their boat up onto the beach. I have  little recollection of this family holiday in Norfolk, as I was just a youngster, but the handful  of pictures in the album, with Mum’s caption, serve well enough. I was surprised, because I must have seen the postcard before, but hadn’t paid much heed to the message on the back. I’m glad I did because it led me off to do some research. 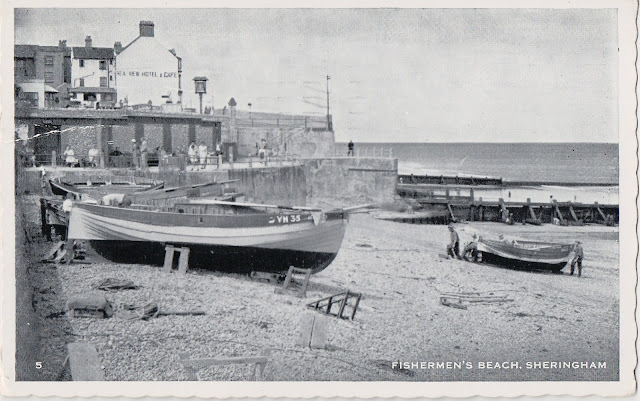 On Tuesday 28th August Mum wrote that we were spending the evening indoors as it was raining. ‘Indoors’ meant being cooped up in this tiny caravan, lit by gas and with the rain drumming on the roof. No doubt we did what we normally did on such a night; played cards, drew pictures and listened to a small transistor radio, whilst Mum knitted or wrote postcards, including this one. The next day, the postcard says, we were going to see ‘Five Finger Exercise’ at the Little Theatre. Mum told my grandparents that the caravan site was a nice one - with hot showers (there had to be some compensations). 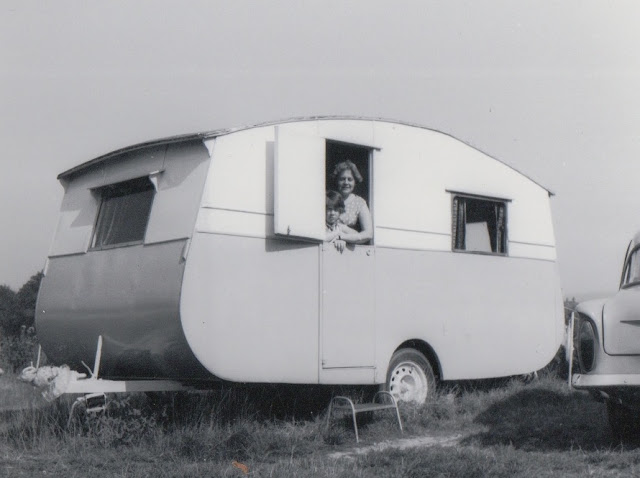 That morning we had visited Weybourne Camp, where Mum had been briefly with the army during WW2, only twenty years previously. Dad took a picture of her wandering alone and deep in thought; it was captioned simply ‘Memories of Weybourne’. In the postcard Mum said: “……the old camp was still there, but deserted.” My grandparents would have known about Mum being at Weybourne, as she had been given a compassionate posting back to Nottingham in the Autumn of 1942 due to her mother being seriously ill. Mum was a clerk with 504 Battery of the 144th Mobile Royal Artillery Regiment, then stationed at Mapperly. From there they went on to Ticknall in Derbyshire and Ashby near Scunthorpe, Lincolnshire. It was whilst she was with the 504s they were sent to Weybourne for two weeks firing training. 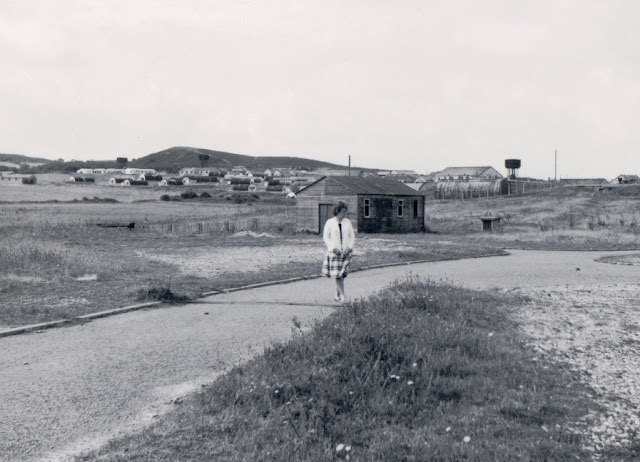 During the War Weybourne played a key part in training Anti - Aircraft troops After the War it was still in use until 1958 for training and there is a Pathe Newsreel about the Territorial Army and their families using it for a training holiday. It  finally closed in 1959 and was clearly in the doldrums at the time of mum’s visit. Happily, it was acquired by Mr C. Berry Savory in the 1980s, and with his son Michael he converted it into a museum, which still attracts many visitors today. 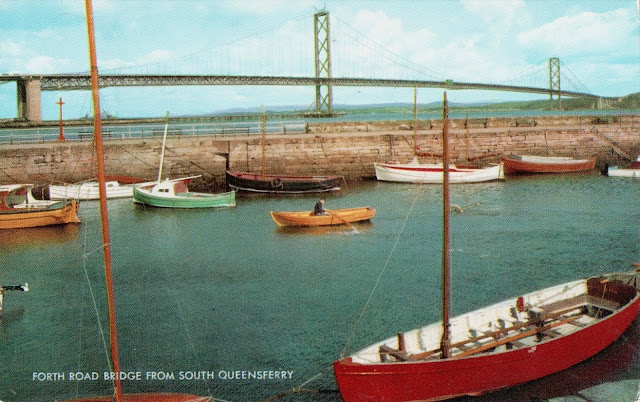 Just when I had given up hope, and was about to put the lid on the shoebox which houses my meagre postcard collection, this one popped up. It was written by my Great Aunt Maude in 1967, and addressed to my parents. She and her friend were holidaying in Scotland and she mentions Holyrood Palace and Castle, and was looking forward to a visit to Princes Street the next day. I rather like the card she chose, with its splash of orange on the blue water. It draws the eye, not to the bridge, but to the boat with its single oarsman. It reminded me of Renoir’s ‘The Skiff’ in The National Gallery. So, in the end I succeeded in ticking two out of three; boats and bridge, but no flags, and an interesting diversion via a shoebox of postcards.

Join us over at Sepia Saturday to see what other contributors found in their family albums and shoeboxes
Posted by Little Nell at 05:59