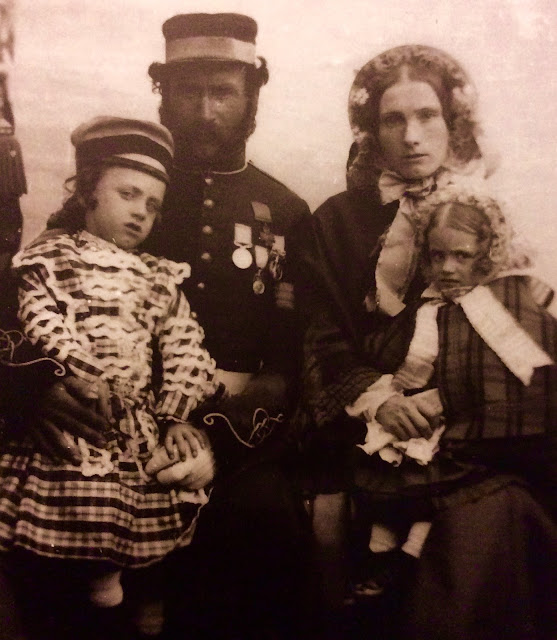 The two children in this photograph look frightened of the camera and very unsure of themselves. Their parents also look unhappy, but the wife is staring stoically ahead and the husband fixes the lens with a grim, but determined, look. Examine this photograph a little a closer and you will see the row of medals displayed on the soldier’s chest This is Corporal John Ross V.C., of the Royal Engineers. John Ross was anything but a frightened man; just over a hundred and fifty years ago (21st July 1865), during the Crimean War, he was awarded the highest honour for valour, for his fearless actions on three separate occasions. First for linking trenches with a large working party, secondly for repeating this action under heavy fire, and thirdly, creeping up to the Redan, and on finding it had been evacuated, returned to report this, but discovered a wounded man whom he then rescued.

Ross lived a further twenty years, dying aged 57 on 23rd October 1879, having achieved the rank of sergeant, and is buried in an unmarked, but consecrated, grave in Islington Cemetery London. However, he is named in the family memorial headstone and on the ‘For Valour’ board at the museum. On the headstone we can read that Ann Jane Ross, daughter of John and Lydia. departed this life in her hundredth year in 1957. She must be the frightened little girl above. Clearly, she overcame her fear and went on to live to a ripe old age. It appears from the headstone that her brother died a few months before his father. 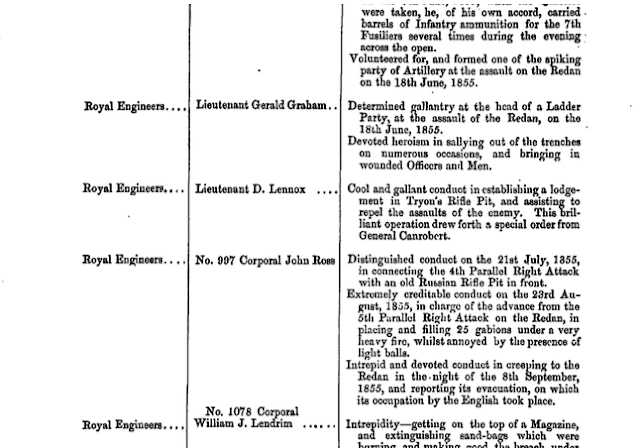 I apologise for the quality of the image as I took the photo through the glass of a display cabinet at the Royal Engineers Museum, Gillingham, Kent, last week. It was my son’s idea that we go, as it is near his home and it would be an interesting day out for the children (our 7.5 year old twin grandchildren) when we paid a flying visit to England from our home in Lanzarote. It was a good choice; the museum was fascinating and we adults could happily have spent all day and still returned on further occasions, as there was so much to see. The twins loved the hands-on  experiences and dressing-up in the soldiers’ uniforms. Of course they were too young too fully understand the stories behind some of the  photographs. Naturally, I was in Sepia Heaven and stories like those of John Ross, completely absorbed me. 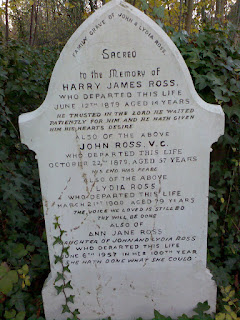 This week Sepia Saturday celebrated its 300th edition with a photo of a family who appear both frightened and frightening at the same time. There is a view that one or two of them may be deceased and that this is a Victorian post-mortem photograph. This could account for the frightened look on the face of the child - or is he/she also a dead and merely being propped up by the dead grandfather. Don’t dwell on it too much; it may give you nightmares - save those for Hallowe’en in a couple of weeks time. Ponder instead on the valour of Corporal John Ross V.C. I’d never heard of him before, but now I hope I’ve done my bit to make this unknown face more widely seen and his bravery appreciated. Why not join us to see what other Sepians made of the prompt.